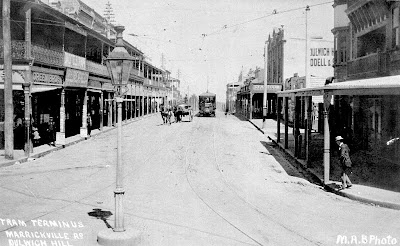 Dulwich Hill, c 1900 - Marrickville Road, viewed from New canterbury Road.
(Click on photograph to enlarge).
Dulwich Hill was named after the London suburb of Dulwich. Earlier names were Wardell's Bush and Wardell's Hill, after the extensive estate of Dr Robert Wardell. Parts of what is now Dulwich Hill were referred to until about 1911 as Fern Hill.
The last extensive subdivision of land in the Marrickville LGA occurred in 1928 at Dulwich Hill. This was the Abergeldie Estate, property of Sir Hugh Dixson, tobacco tycoon and philanthropist. The subdivision comprised 153 allotments with the auctioneer selling all of the allotments on the one day with the sale finishing by candlelight.
http://www.marrickville.nsw.gov.au/community/history/suburbs.htm
Some further points of interest about Robert Wardell:
-  Robert Wardell (1793-1834) an English barrister, unsuccessfully applied for the post of Attorney Genereal of New South Wales in 1823.
-  In 1824 he sailed for Sydney with his mother.  On arrival he sued the owner of the ship for subjecting him to 'a wet and comfortless cabin', and denying him 'sufficient nourishment and refreshments' on the voyage.  He was awarded £200 damages and £4 16s. 2d. costs.
-  He had become acquainted with William Charles Wentworth in England in 1819.  Wardell and Wentworth travelled to NSW on board the same ship and, on arrival, they jointly established a newspaper, published weekly and sold for one shilling.  The first independent newspaper published in the colony, it was named The Australian.  In reality the newspaper was Wardell, who used it as a means of pressuring public officials and to expound his own viewpoints.  The first editorial stated:

'A free press is the most legitimate, and, at the same time, the most powerful weapon that can be employed to annihilate influence, frustrate the designs of tyranny, and restrain the arm of oppression'

-  Both Wardell and Wentworth practised as barristers in the colony, with Wardell becoming a thorn in the side of Governor Darling, so much so that Darling at one stage prosecuted Wardell for criminal libel following Wardell's criticism of Darling's attempts to restrain the press.  Wardell represented himself and the jury was unable to agree.  Tried again but this time represented by Wentworth, the jury was again unable to agree.  No further trial was held.
-  On two occasions Wardell was challenged to a duel, duelling not yet being illegal.  One such challenge was by the person who had been appointed Attorney General when he had applied in 1823, Saxe Bannister, and once by his friend, Colonel Dumaresq.  No one was injured on either occasion.
-  By 1834 Wardell was a wealthy man.  Apart from his income from his legal practice, his land investments and speculations had added considerably to his worth.  His holdings included an estate in Petersham of 2,500 acres (1,012 ha).
-  It was Wardell's intention to return to England with his fortune.  Inspecting his Petersham estate on 7 September 1834, whilst near the Cook's River boundary, he came across 3 strangers in an unauthorised humpy.  Correctly surmising that they were escaped convicts, he engaged in an argument with them and was shot dead by their leader, John Jenkins.  Wardell's body was found the next day, the convicts were caught a week later.  Two of the convicts were hanged, the youngest being spared from  hanging in return for giving evidence.
Posted by BytesMaster at 9:53 PM