In early days, trial by combat was commonplace.  The winner was deemed vindicated by the law and by God. 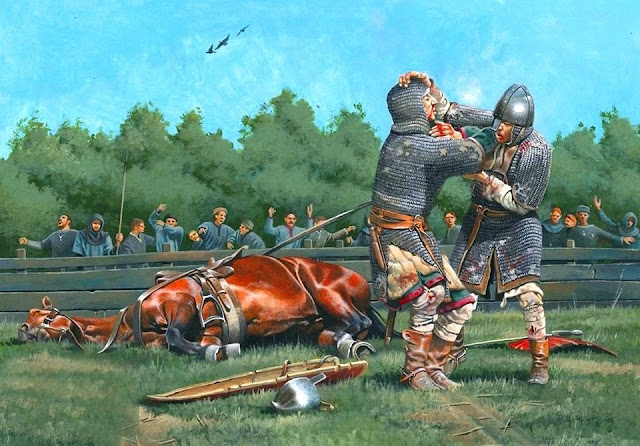 In the 12th century, chronicler Galbert of Bruges recorded a trial by combat between a knight named Guy of Steenvoorde and a knight named Herman the Iron.  Guy was suspected of involvement in the murder of  a count, one Charles of Flanders, and was ordered to battle Herman.

According to Galbert, the chronicler:

“Guy unhorsed his adversary and pinned him down with his lance… Then [Herman] disembowelled Guy’s horse by running at him with his sword. Guy, having fallen from his horse, rushed at Herman with his sword drawn. There was a long and bitter struggle with clashing of swords, until both were exhausted [and] fell to wrestling. Herman fell on the ground and Guy did lay upon him, beating his face and eyes with iron gauntlets. But Herman lay prostrate, regained his strength from the cool of the earth and lay quiet, leading Guy to believe that he was victorious. But Herman moved his hand to Guy’s cuirass [apron armour] where he was not protected and seized him by the testicles, and summoning all his might hurled Guy from him. By this motion all the lower parts of Guy’s body were broken [and he] gave up, crying out that he was beaten and was dying.”

Herman the Iron was declared victorious and Guy of Steenvoorde was dragged to the gallows, where he was finished off alongside other conspirators.

Andrew Jackson (1767-1845) was President of the US from 1829 to 1837.  He was also a prodigious dueller and hothead.  He hqad fought 103 duels before becoming President, many in defence of the reputation of his wife Rachel or because of some slight about her.  Jackson had married Rachel in 1791 after she had separated from her abusive husband, Lewis Robards.  However her divorce had not been finalised so that Jackson’s marriage to her was bigamous, causing one Charles Dickinson (aged 26) to make a snide comment about her in 1806 and resulting in Jackson (aged 39)  challenging him to a duel. 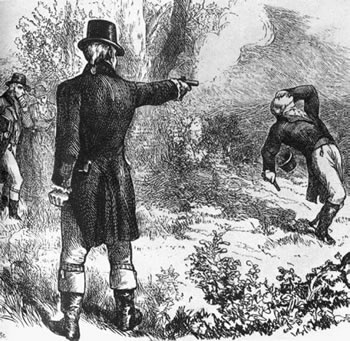 Dickinson, also an accomplished duellist, fired first.  The bullet struck one of the buttons on Jackson’s loose overcoat and succeeded only in breaking two ribs.  When Jackson remained standing, Dickinson exclaimed “My God.  Have I missed him?”

Jackson fired next but his pistol misfired, the flint hammer stopping half-cocked, not counting as a legitimate shot.  Under the rules, Jackson had the right to fire again.  Dickinson had no choice but to stand and watch Jackson carefully aim and fire.  The bullet hit Dickinson in the chest and he died later that night.

Jackson lived thereafter with a bullet inches from his heart that was never removed. Reflecting on the duel, the doctor remarked to Jackson, “I don’t see how you stayed on your feet after that wound.” Jackson responded, “I would have stood up long enough to kill him if he had put a bullet in my brain.”

Dickinson was the only man Jackson ever killed in a duel, despite the 100 and more in which he participated.

In 1829 British Prime Minister the Duke of Wellington met Lord Winchelsea, Welington being the only elected head of state to fight a duel.

The Earl of Winchelsea, a staunch Protestant, in correspondence later published in the Standard newspaper, accused Wellington of deception and of intending to introduce “Popery into every department of the state.”

Wellington challenged him to a duel and they met with pistols at dawn on Battersea Fields, among the cabbages, as the Morning Herald observed. 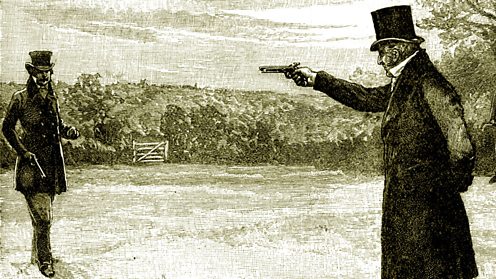 The Duke of Wellington fired first, but without effect. The Earl then discharged his pistol in the air.

With both party's honour satisfied, the Earl then tendered a retraction and an apology which the Duke accepted.