The Pulitzer and World Press Photos of the Year, continued: 1989, Part #1 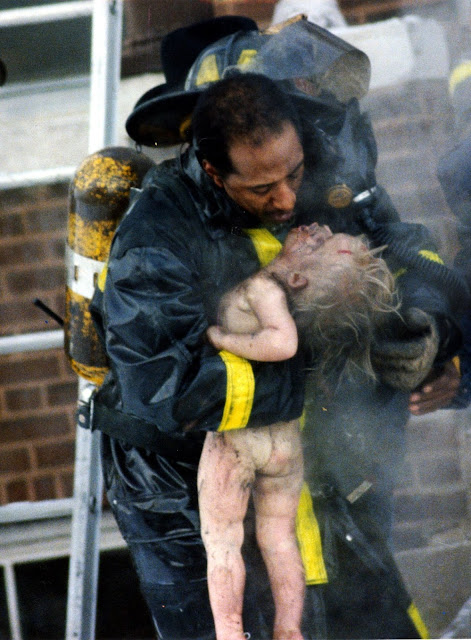 Ron Olshwanger's prize-winning-photograph of St. Louis firefighter Adam Long trying to breathe life into a 2-year-old girl, Patricia Pettuis, he had pulled from a burning building on Dec. 30, 1988.

Long received a Medal of Honor for his efforts, but has stated that he didn’t feel very heroic.  “For about a year, I second-guessed myself: ‘Did you really do all that you could have done?' " Long has said that to him, Patricia Pettuis was the hero:  "People are going out and buying smoke detectors because of what they see in that photo.” 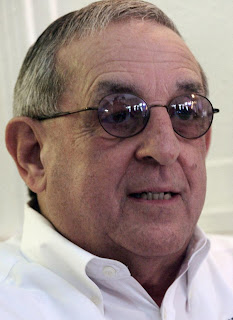 Ron Olshwanger was a furniture dealer and amateur photographer when he took the above photograph in 1988 that won him a Pulitzer in 1989.  Before the award ceremony, Olshwanger commented that ''I'll be feeling kind of funny that I'm there with these professional people whom I admire tremendously.  I'll wonder what I'm doing there.''  With him at the award ceremony were his wife and Adam Long.

Olshwanger has described the taking of the photograph as a “total accident.” ' he said. He had been standing at the fire scene with his Minolta X700 in December when a reporter told him, ''When you get them developed, call me.'' He gave his film to a one-hour developing service and, when he returned to pick it up, he said, the clerk was crying after seeing the photograph.  When he showed it to his wife, she also started to cry.  After the Post-Dispatch bought and published the photograph, people started writing in, asking for copies of the picture.  The newspaper charged them $25 and donated the money to a hospital.

OIshwanger donated all prize money and income received from the photograph to charity and to assisting the poverty stricken family of Patricia Pettuis. 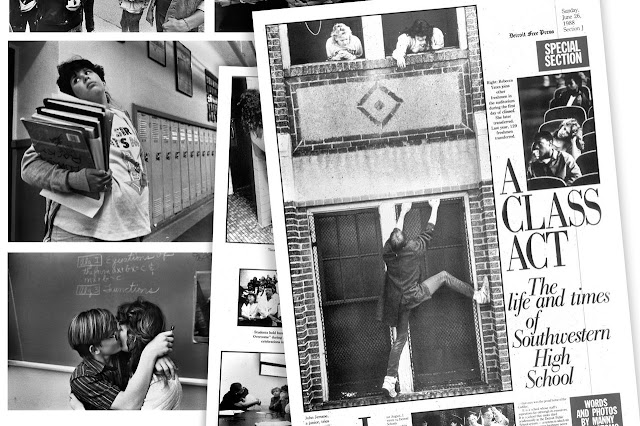 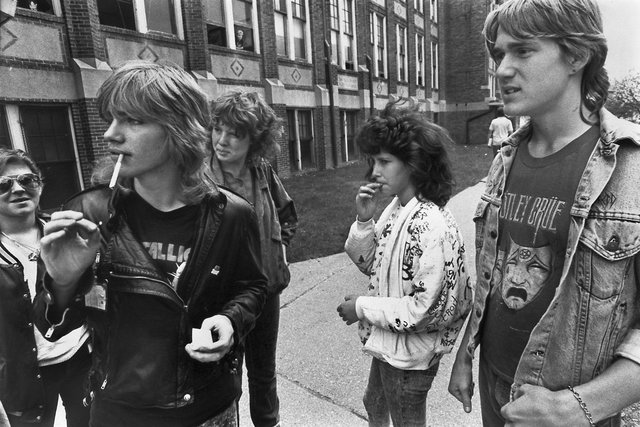 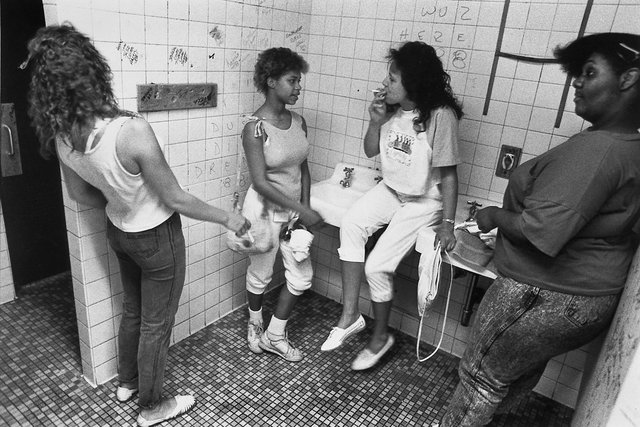 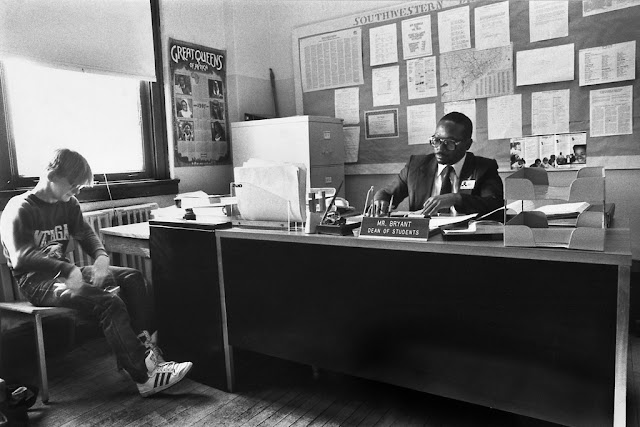 Cristomo’s photo series documenting a year in the lives of students and faculty at a city high school earned Detroit Free Press photographer Manny Crisostomo the 1989 Pulitzer Prize for feature photography.  The photo series is called 'A Class Act, the Life and Times of Southwestern High School.'  It was part of an article that examined the violence that faces young people in Detroit.

Crisostomo said he started work on the photo series on Southwestern's first day of school in the 1987-88 school year and followed students and faculty through graduation.  'I worked real hard on it,' he said. 'I think it's a good portrayal on what's going on in the Detroit Public School system. And I hope people can look at it and say, 'There's some problems, there's some good things and some bad things and we need to do something about it. Documenting with my photographs, I want to bring about some changes, however big or small they might be.' 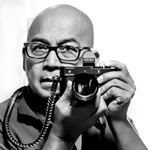 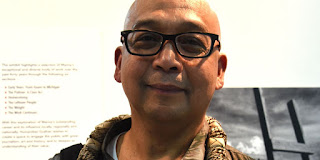 Manny Crisostomo won a Pulitzer Prize at age 30 and immediately sensed the profound impact the prize could have on the rest of his career.
So he took his $3,000 Pulitzer Prize money and donated it to Detroit’s Southwestern High School to fund a journalism scholarship for graduating seniors and provide opportunities for others.Those students at Southwestern High School, a racially diverse, inner city school just five miles from the Detroit Free Press newsroom, were the focus of Crisostomo’s Pulitzer-winning feature photography.
He spent the 1987-88 academic year chronicling life at the school, the successes and struggles of students from troubled neighborhoods overwhelmed by drugs, violence and plant closings.
“There were drugs everywhere. There was violence everywhere. Yet, it was still high school,” Crisostomo says. “There was dating. There were pep rallies. There was football.”
That complex and compelling portrait was presented by the Detroit Free Press in June 1988 as a 12-page, ad-free, special section titled “A Class Act, The Life and Times of Southwestern High School.”Crisostomo wrote all the copy and produced all the photos. More than 60 were published in total. 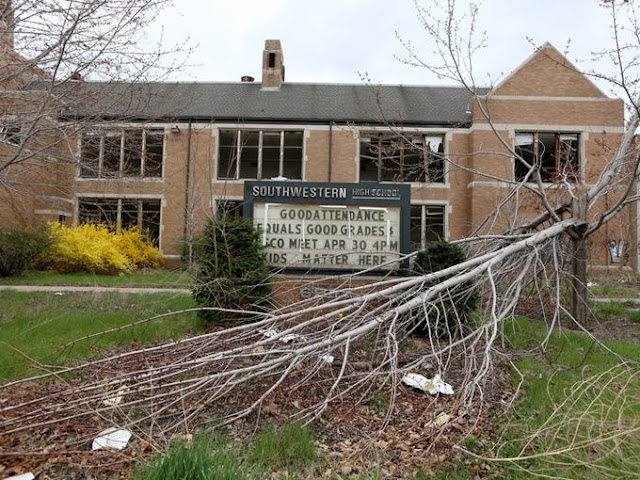 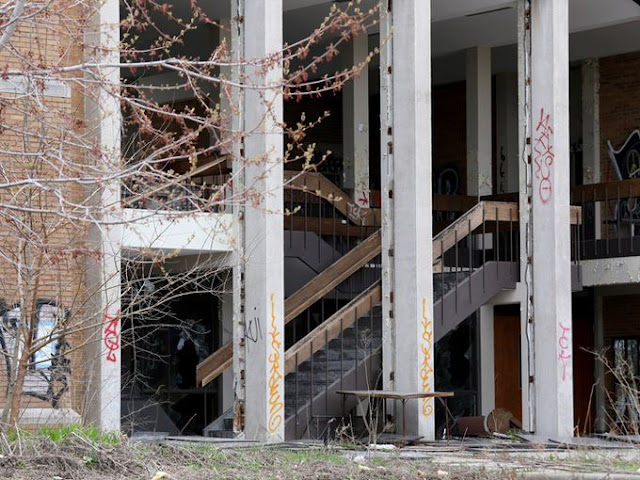 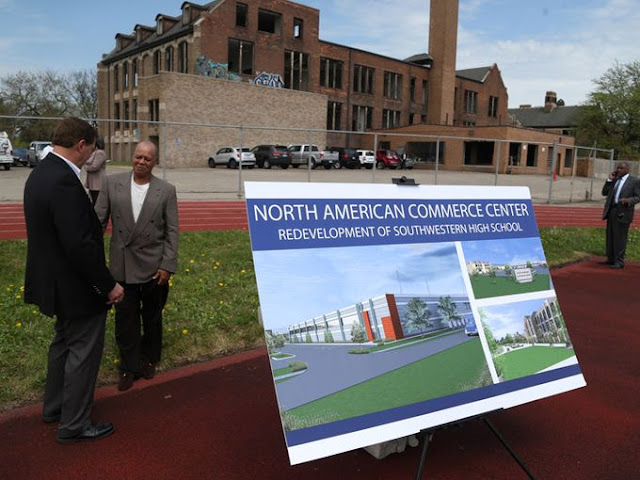 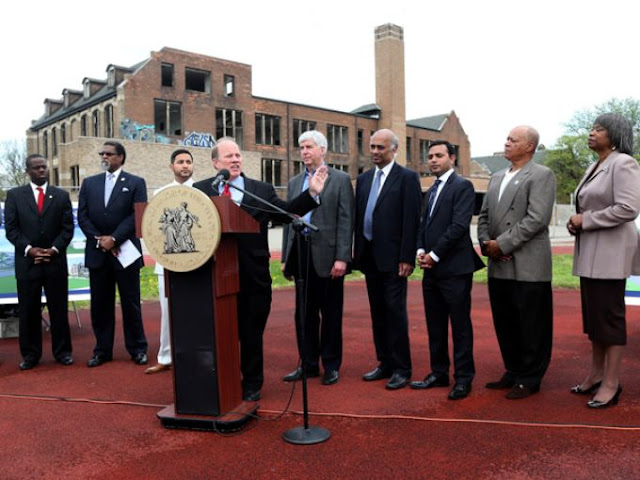 In 2015 Detroit Mayor Mike Duggan Announced the school would be turned into a manufacturing facility employing 600 workers.

Posted by BytesMaster at 3:45 AM