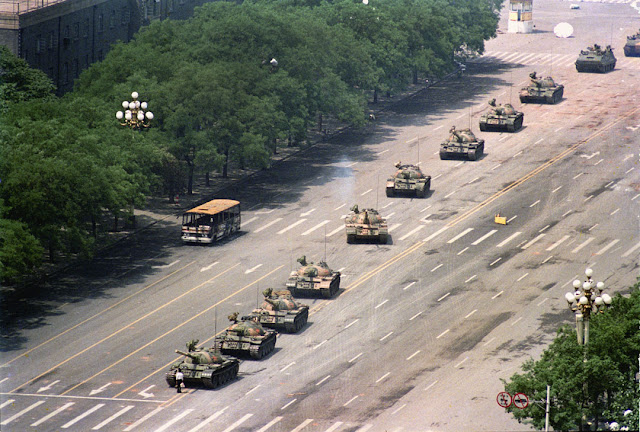 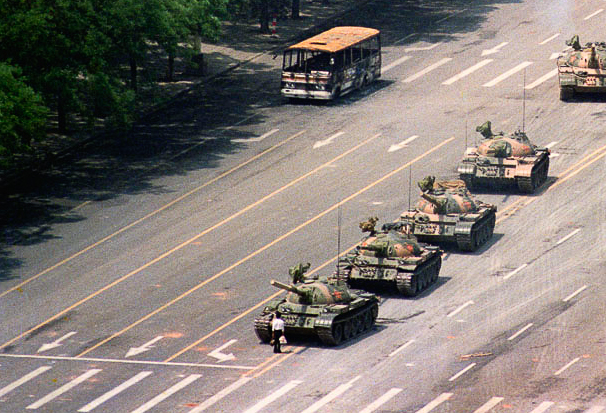 Back in 2011 I posted an item about this iconic image, which I reprint as follows:

A photograph may be iconic for being a memorable moment frozen in time, or because it is a significant first or records a historic event, or simply because it has developed a popular awareness for some reason. There are a myriad reasons as to why a photograph comes to be regarded as iconic.One photograph has developed such a status by recording a brief moment of courage by an unknown, ordinary individual, a moment of inspiration in history.At time when protests against governments have spread from Egypt to other middle east countries, it is worth reflecting on such earlier events.In 1989 hundreds of thousands of demonstrators occupied Tiananmen Square in Beijing, China, calling for political reform and the resignation of the communist leadership. They were led by students, 3,000 of whom staged a hunger strike in the square. The old guard of leaders determined to crack down on the protest and sent in troops. In the massacre that followed, more than one thousand unarmed protesters were killed by government troops. Apart from troops, tanks were used to crush vehicles, obstacles and people.The morning after the massacre, more tanks were sent to the scene. A man with a shopping bag in each hand stood in front of the column of tanks, bringing it to a halt. He even climbed onto the lead tank to remonstrate with the occupants before being led away. There has been conjecture as to whether those who led him away were concerned civilians or secret police and as to whether he was executed. To this day his identity and fate remain unknown.Four photographers managed to capture the image on film, although the photograph by Jeff Widener is the most commonly reproduced. It appears above.
The four photographs of the man and the tanks on Changan Avenue, all taken from the Beijing Hotel. Left to right, top to bottom:Charlie Cole, Jeff Widener/Associated Press, Stuart Franklin/Magnum Photos, Arthur Tsang Hin Wah/Reuters.

Known today only by the name Tank Man, the man who stopped the tanks, if only for a brief time, has become an iconic symbol for the democracy movement in China.  He has also become an international symbol for ordinary citizens standing up to injustice, no matter how powerful the opponent.To this day, no one knows who he is or what became of him.

Charlie Cole, working for Newsweek, hid his roll of film containing Tank Man in a Beijing Hotel toilet, sacrificing an unused roll of film and undeveloped images of wounded protesters after the PSB raided his room, destroyed the two aforementioned rolls of film and forced him to sign a confession to photography during martial law, an imprisonable offence. Cole was able to retrieve the roll and have it sent to Newsweek.  He was awarded the 1990 World Press Photo of the Year and the picture was featured in Life's "100 Photographs That Changed the World" in 2003. 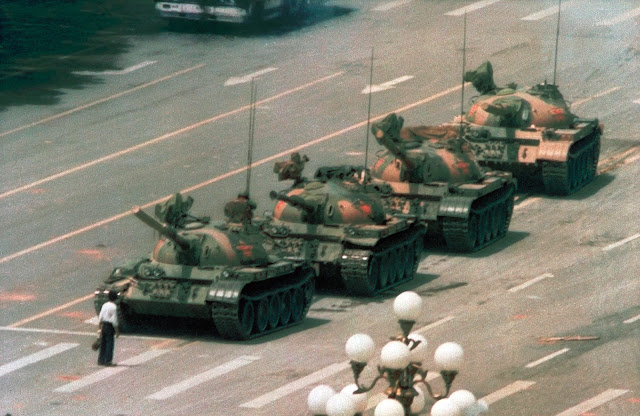 Jeff Widener’s photo of Tank Man, which is the most widely used of the similar images from different photographers:
Hear and see Jeff Widener talk about the taking of his photograph and the events which led up to it, plus a video of Tank Man (including his climbing up on the tank to talk to the tank crew), by clicking on the following links:

A final note:  Why was Charlie Cole’s image selected as the World Press Photo of the Year ahead of the others who photographed the same scene?

Here are some comments about that:

·     Jeff Widener of Associated Press was nominated for a Pulitzer for Tank Man in 1990 but did not win. Neither Charlie Cole (Newsweek)  nor Stuart Franklin (Time) were eligible.

“The Pulitzer Prize is like the American World Series, it’s a bit of a misnomer, since the only ones who can apply are those working for an American newspaper or wire service, not exactly a world wide photojournalism competition, not to say they don’t produce some great winners that would’ve done well or won in a true world event. American magazines are not allowed to enter the Pulitzer competition although there was a time when they were back in the 60-70’s.”

“Although our magazines were competitors, Stuart and I were far more concerned with watching each other’s backs than anything else. We also shot our tank photos shoulder to shoulder, and used various focal lengths at different moments. I think it is pretty safe to say that we both have fairly identical photos of the scene. He has them tighter than the one shot Magnum released and I have them more loose, and closer to his version, than what Newsweek and World Press released.”

“Upon being notified of the World Press Award, I requested that they make us co-winners, since we had the same frames just different cropping. They refused and said they liked the tighter crop. I’ve always said about photo contests that with one set of judges you get one set of winners, given a different set of judges they most likely would’ve selected his version, I still think they should’ve given it to both of us, and always will.”

“Later, Stuart left to go to Beijing University and I stayed behind to see what else might happen. Shortly after he left, PSB agents crashed through our hotel room door. Four agents swept in and assaulted me while a few others grabbed my cameras.

They ripped the film from my cameras and confiscated my passport. They then forced me to write a statement that I was photographing during martial law, which unbeknown to me carried a hefty prison sentence. They then put a guard at the door.

I had hidden the roll with the tank pictures in its plastic film can in the holding tank of the toilet. When they left, I retrieved it and later made my way to AP to develop and transmit it to Newsweek in New York.”

“What most people don’t realize is how much firepower was actually at the scene and had been going since the night of June 3.”

Some of Cole’s other photos show that firepower: 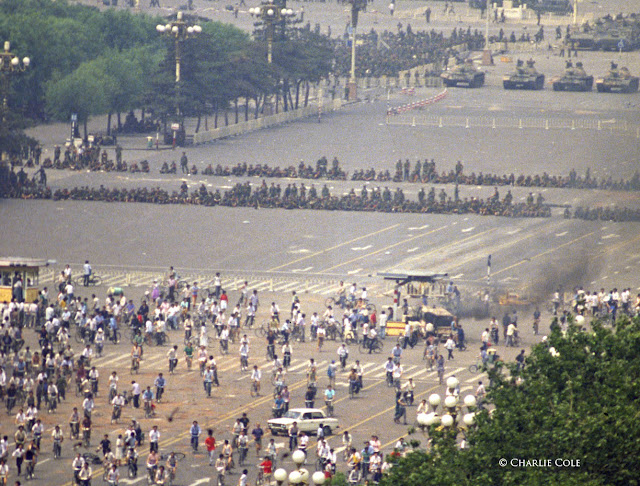 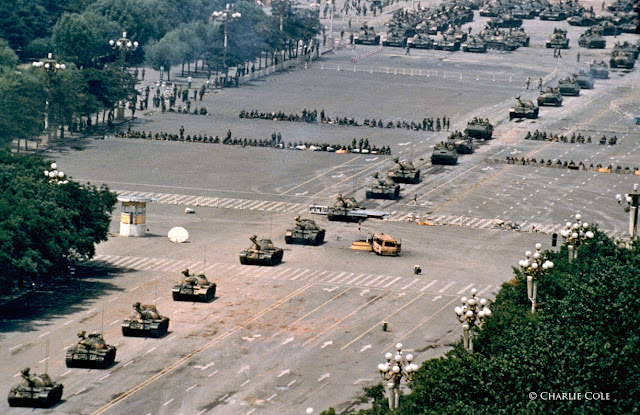 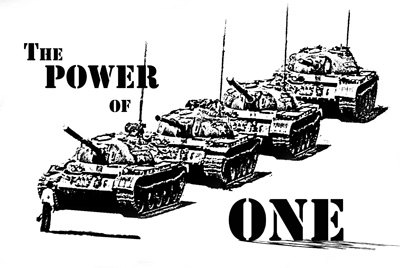 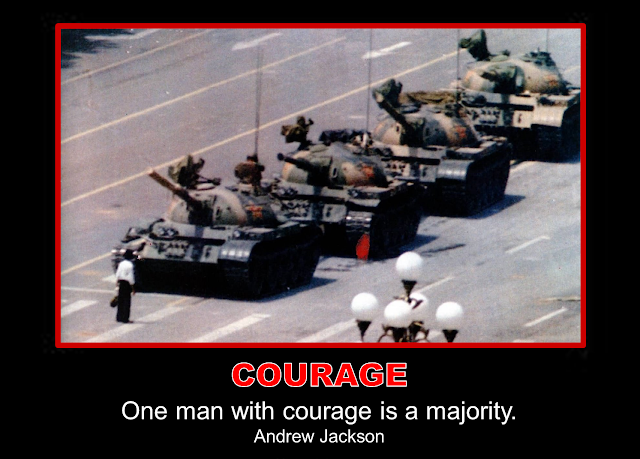 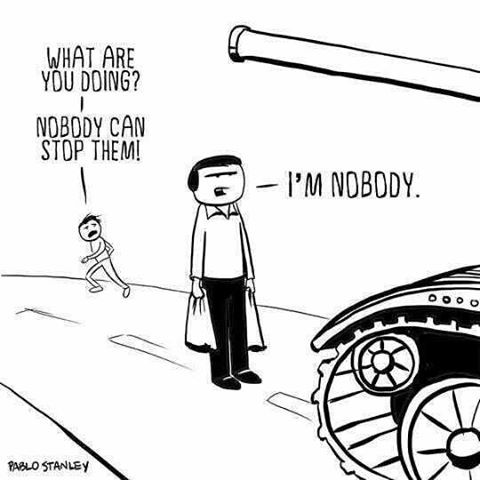 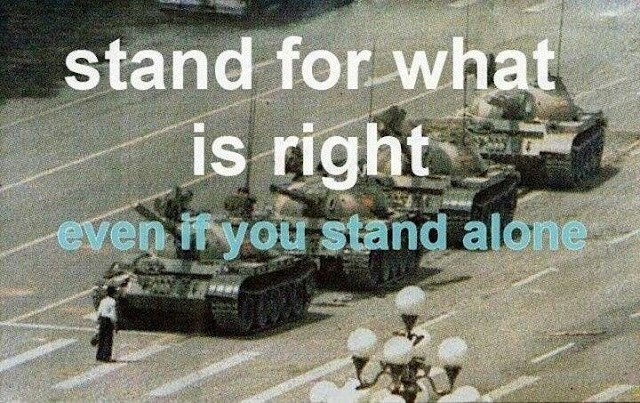