Spread across the U.S. states of southern Nevada, northern Arizona, northwest Colorado, and Utah is a geological formation known as Navajo Sandstone. Within south-central and southeastern Utah the sandstone and iron have combined with weathering to produce what are known as concretions, more commonly known as Moqui Marbles.

These iron oxide concretions exhibit a wide variety of sizes and shapes. Their shape ranges from spheres to discs; buttons; spiked balls; cylindrical hollow pipe-like forms; and other odd shapes. Although many of these concretions are fused together like soap bubbles, many more also occur as isolated concretions, which range in diameter from the size of peas to baseballs. The surface of these spherical concretions can range from being very rough to quite smooth.

The word “moqui” comes from the Hopi Tribe, and it means “the dead” in the Hopi language. The Hopi Tribe itself was known as the Moqui Indians, named so by the early Spaniards, until their name was officially changed to Hopi in the early 1900s. According to one Hopi legend, Hopi ancestors’ spirits return to Earth at night and play marble games with these iron balls, and in the mornings the spirits leave the marbles behind to reassure their relatives that they are happy and content. 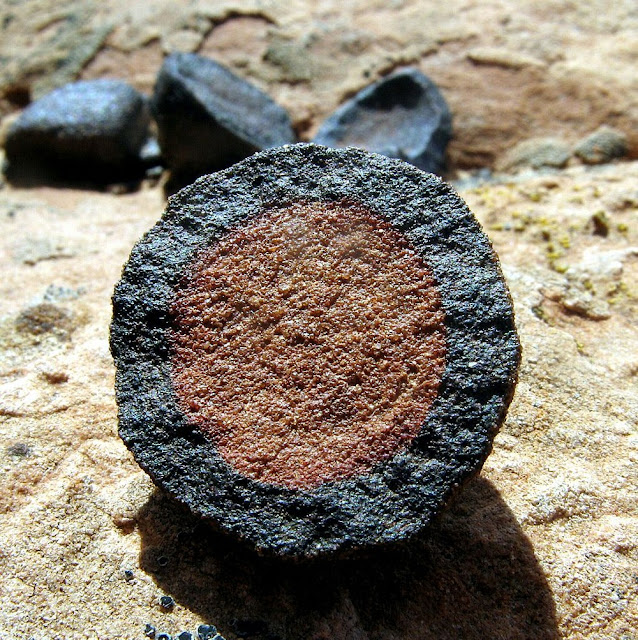 Interior of a Moqui Marble 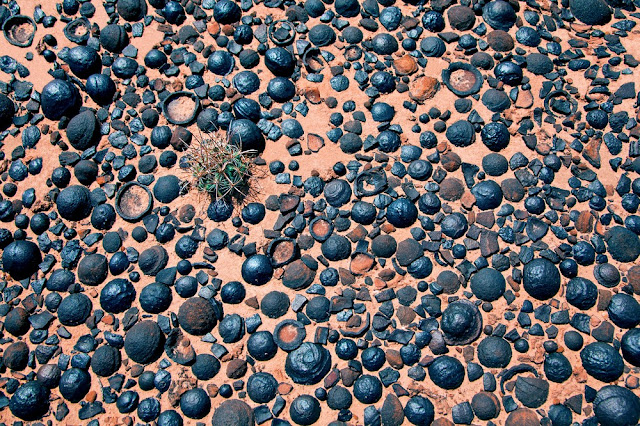 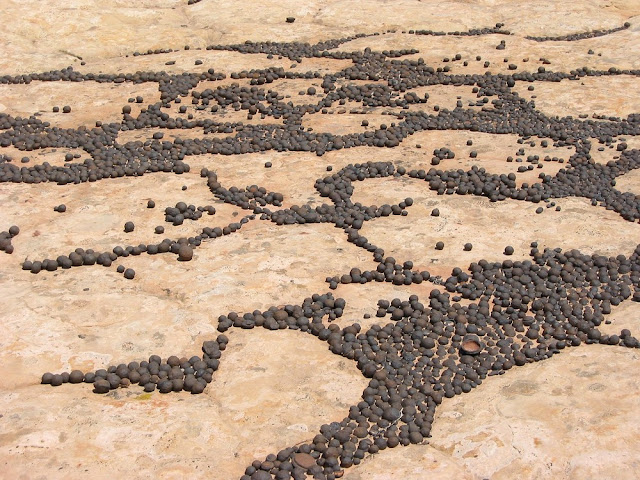 Moqui Marbles have a Martian geological equivalent, known as Martian Blueberries or, for those with less imagination, Martian spherules.

In 2004, NASA’s Mars Rover found Martian concretions, believed to have formed in a similar manner as Moqui Marbles, providing evidence that Mars once had a wet surface. There is also evidence that certain bacteria and microorganisms can help iron to form concretions, a fact bearing on the search for evidence of past life on Mars. 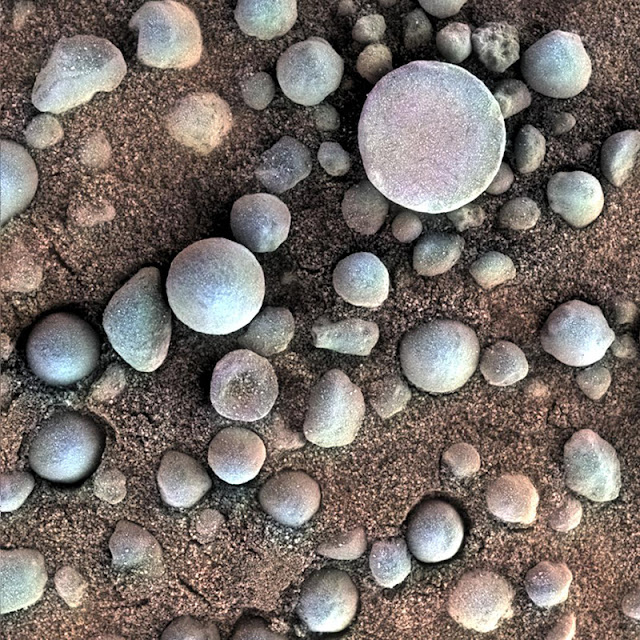 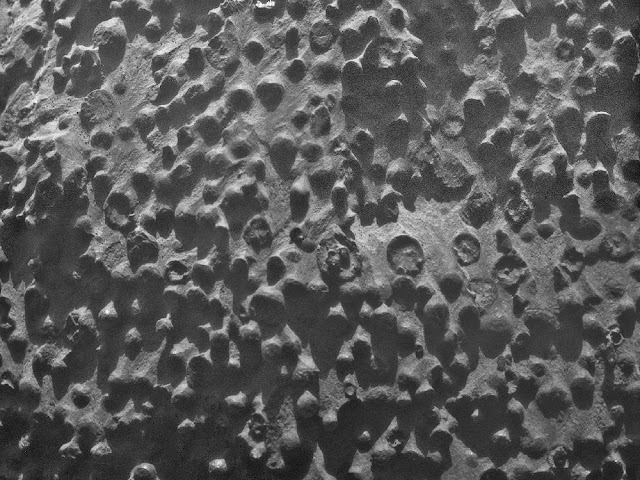 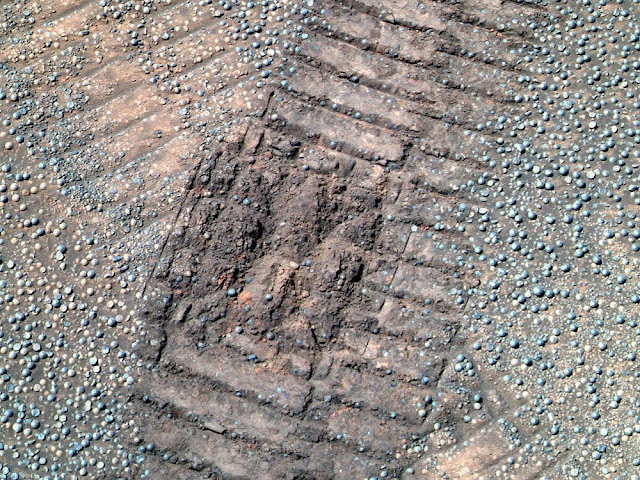 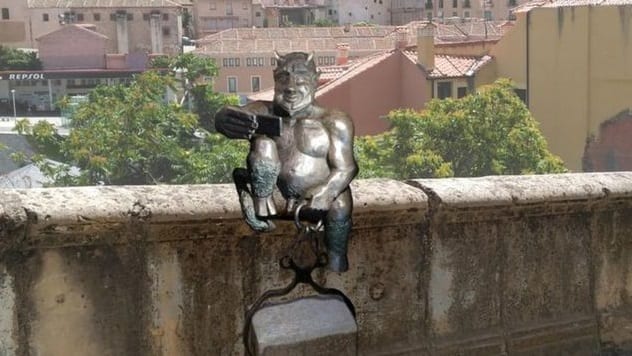 Residents of the Spanish city of Segovia are up in arms over a Devil sculpture because it looks too friendly.

Segovia has a famous Roman aqueduct which, according to legend, was built by the Devil at the request of a servant girl. Local artist Jose Antonio Abella was working on a sculpture that commemorated this particular piece of lore. It was Satan taking a selfie. However, about 5,400 people (roughly a tenth of the city’s population) have signed a petition calling for the cancellation of the statue (mock-up pictured above). As a result, a judge has placed the artwork on hold until the matter is resolved.

Their problem is that the Devil looks too jovial and good-natured. It exalts evil and offends Catholics. They believe that Satan should be depicted as looking repulsive and fearsome and that the statue, as is, would turn Segovia into a hot spot of Satanism.

The city’s heritage councillor, Claudia de Santos, promised the project will continue despite the “unfair, dispiriting” push against it. Abella also admitted to being shocked at the response and says that his sociable Satan has a far more innocuous purpose: It’s for tourists to take selfies with. 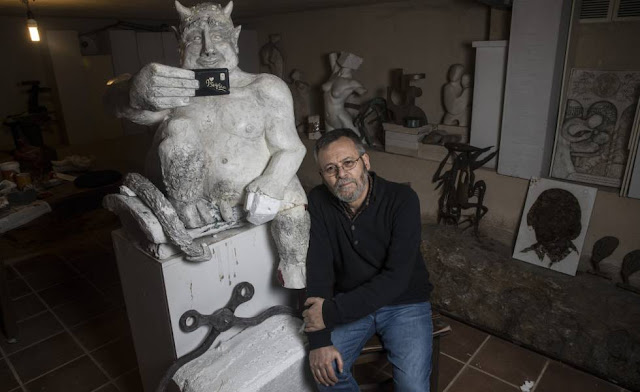 Sculptor José Antonio Abella Mardones poses with a plaster model of his sculpture. 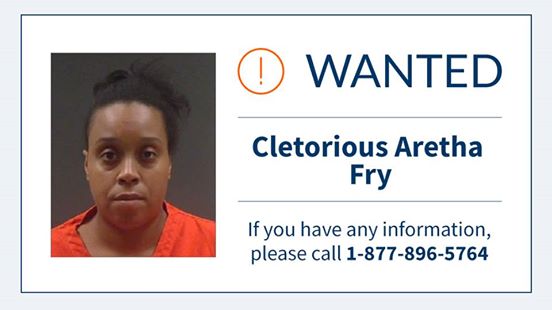 Fugitive File: Cletorious Aretha Fry, age 34, is wanted for violating the terms and conditions of her supervised probation. She removed her ankle bracelet and her whereabouts are unknown. Her last known address is 163 Chancellor St. Apartment 5, Charlottesville, VA.

A woman who is on the run from police has gained a lot of attention after police posted her mugshot online but its not her crimes that have people talking, it’s her name. The Virginia Department of Corrections in the US uploaded a photo of the fugitive to their Facebook page and people immediately started mocking her unusual name.

“Cletorious Aretha Fry, age 34, is wanted for violating the terms and conditions of her supervised probation,” the post read. “She removed her ankle bracelet and her whereabouts are unknown.”

Social media users seemed to think her name sounded very similar to a part of the female anatomy, resulting in hundreds of hilarious comments.

Here are some of the best comments:

“VIRGINIA is looking for its CLETORIOUS? Not today internet. Not today,” one person wrote.

“Her husband’s been looking for her for years,” another said.

One added: “She was sentenced to five years hard labia.”

Once a Year, Over 27,000 Elvis Fans Flood This Small Australian Town

Many places lay their claim to Elvis Presley: Tupelo, Memphis, Hawaii...and Parkes, a small town in the southeast corner of Australia. Although The King never set foot Down Under, for the past 26 years, close to 27,000 tourists — over double the town’s population — flood the locale for the Parkes Elvis Festival. Held the second weekend of January to coincide with Elvis’ birthday, the 5-day festival celebrates all things Elvis from the music to the jumpsuits.

The idea for the festival came about — as many great things do — at an Elvis-themed dinner party. Elvis aficionados Bob and Anne Steel, two of the guests, decided to host the first festival at their Gracelands restaurant. The hot summer months are slow for tourism in Parkes, so they thought holding a festival in January would be good for the town’s economy. "(January is) a pretty slack time,” Bob told the BBC. “I went to a hoteliers' meeting, and they were all having their grizzle about quiet times. I said, well, Elvis's birthday is in January, and we could have a birthday party."

Only a few hundred people attended the first one-night festival in 1993, but the festival has steadily grown each year and now draws Elvis fans from across the globe and is endorsed by Presley’s estate. 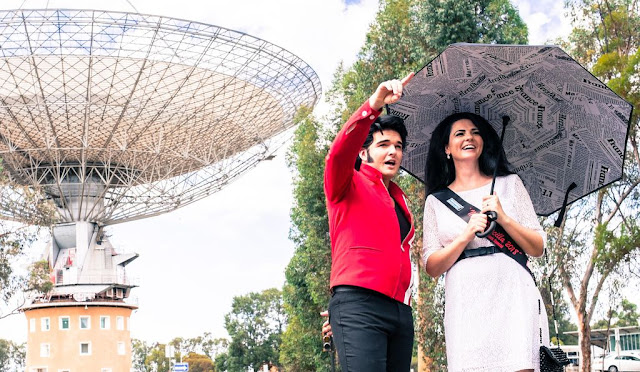 An Elvis and Priscilla lookalike at the 2019 Parkes Elvis Festival

Posted by BytesMaster at 9:30 PM