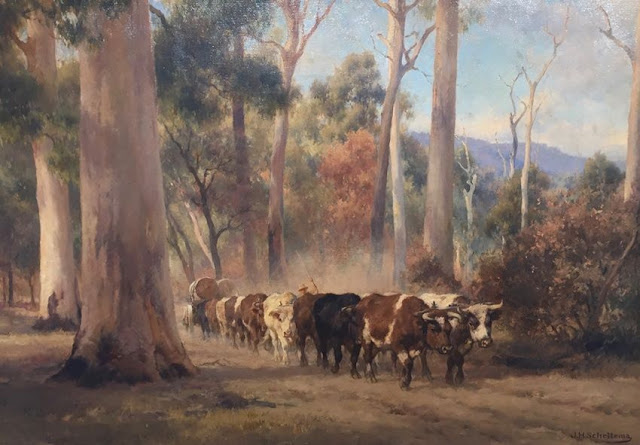 Early Australia was settled by convicts and their military guards. When development outstripped the capacity of convict labour, working bullocks were used for transport wool, timber and supplies. Australia may have "rode on the sheep's back" but the wool that brought prosperity was transported from the outback stations to the ports on bullock wagons.

A bullock is the Oz term for a mature, desexed bull. Overseas they are more commonly known as oxen and steers. In the US a bullock may also mean a youn
g bull. Castrated bullocsks are more docile and easier to control.

As many as thirty bullocks driven by one man were used to haul enormous loads on massive wagons long distances from outback farms and stations to their destinations on the coast.

Bullocks are usually harnessed in pairs as their strong necks make them ideally suited to wearing a wooden yoke which efficiently transfers their draught power through a chain or pole to the load. When two or more pairs of bullocks are harnessed together to perform draught work, you have a bullock team.


Bullocks have been used singly and in pairs or teams for much of human history. Bullock teams had their peak in the late 19th and early 20th centuries, particularly in the rapidly developing countries of Australia, South Africa and New Zealand. In Australia, as many as thirty bullocks driven by one man, were used to haul enormous loads on massive wagons long distances from outback farms and stations to their destinations on the coast.

Why did people choose to have a Bullock Team?

In a developing country like Australia, a bullock team had many advantages over other forms of transport. Compared to convict labour they were much stronger and probably much easier to control and get along with. Cattle were included in the livestock that arrived on the first fleet and they did very well here, rapidly increasing in number. In comparison to horses bullocks have always been much cheaper to aquire when young and of much greater value when they are old. Additionally, the harness for a bullock team can be made from almost nothing other than scrap metal and bush timber in the hands of an amateur blacksmith and timber worker. On the other hand, producing a horse's harness is a job for a highly skilled saddler and could cost as much as the horse itself.

Bullock teams were renowned for their steady, patient and determined pull in difficult situations where horses were prone to jerkiness and panic leading to expensive injuries and breakages. Bullocks didn't often need shoeing and could live and work on rough herbage rather than the expensive feed required by working horses. It wasn't until improved road surfaces meant that the greater strength and speed of draught horses could be put to advantage, that bullock teams began to be displaced on the road.

In our forests and on our farms bullocks have been used up to the present day. Australia's last full-time professional bullockies retired from the forest in the early 2000's, but there are still a few hardy individuals who train and yoke bullock teams as hobbies, for demonstrations or for part-time work in forests and on farms. In the case of Rohan the Bullocky, his bullock team began as a hobby, developed into a genuine working team and is now available on and off his farm for displays. 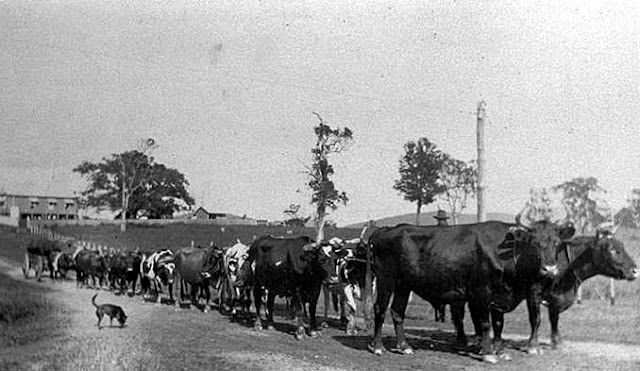 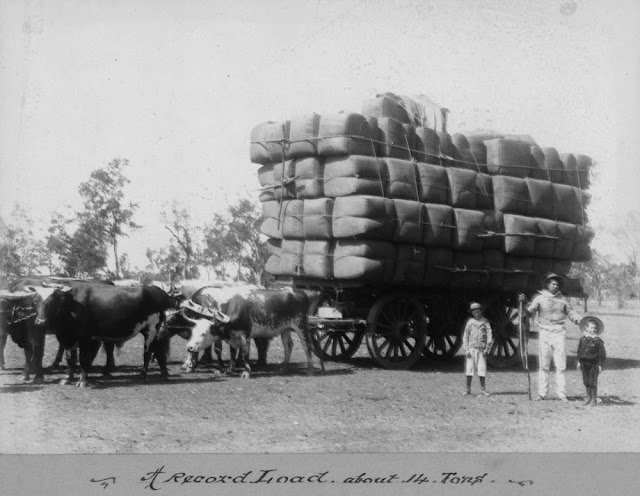 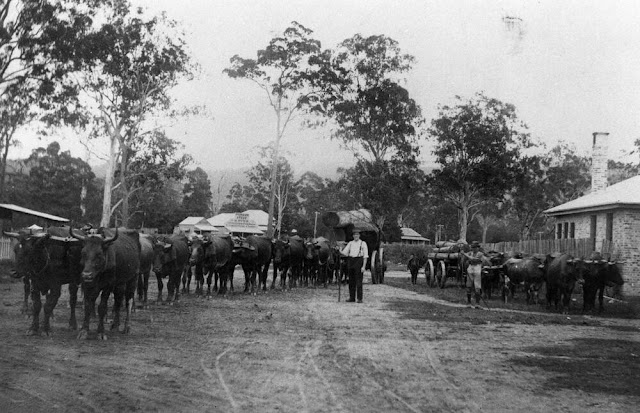 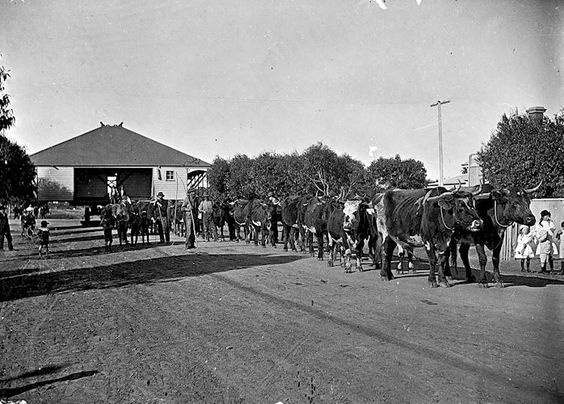 House being moved by a bullock team, Victoria, circa 1910 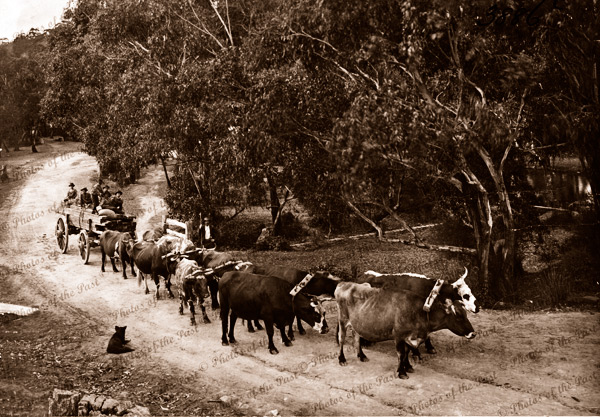 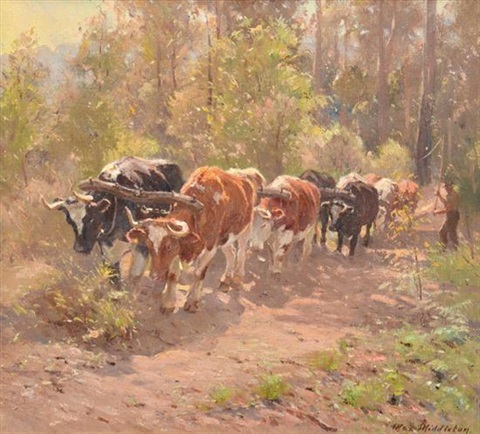 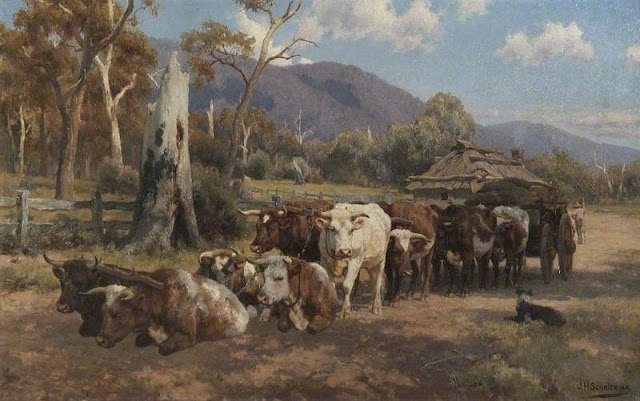 Bullock team pulling a timber jinker on the streets of Caboolture 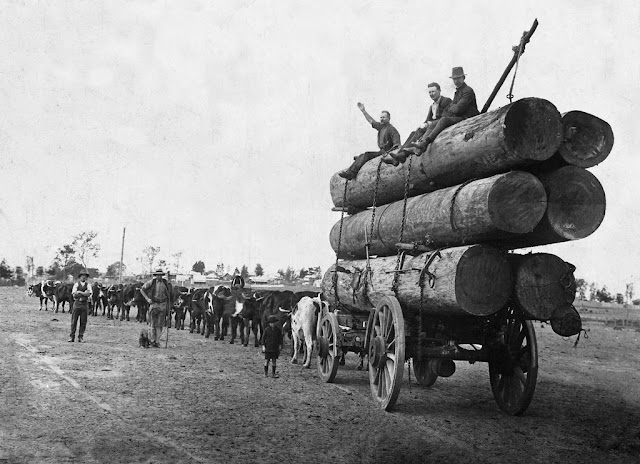 Gundagai is a town known for its tourist attraction of a dog sitting on a tucker box. For the benefit of overseas readers, “tucker” meaning “food”, a tuckerbox thereby being a food-locker, as carried by bullockies with their bullock teams. I have previously written about the dog sitting on the tucker box and that it is a later sanitised version of the dog excreting in the bullocky’s tucker box. The post can be viewed at:
http://bytesdaily.blogspot.com/2010/08/gundagai-and-dog-sitting-on-tuckerbox.html#more 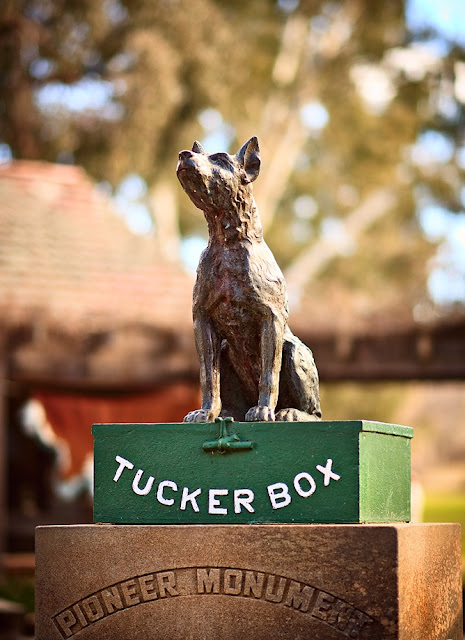 I'm used to punchin' bullock teams across the hills and plains.
I've teamed outback for forty years through bleedin' hail and rain.
I've lived a lot of troubles down, without a bloomin' lie,
But I can't forget what happened just five miles from Gundagai.

'Twas getting dark, the team got bogged, the axle snapped in two.
I lost me matches and me pipe, so what was I to do?
The rain it was a-coming on, and hungry too was I,
And me dog shat in me tucker-box five miles from Gundagai.

Some blokes I know have stacks of luck, no matter where they fall,
But there was I, Lord love a duck, no bloody luck at all.
I couldn't heat a pot of tea or keep me trousers dry,
And me dog shat in me tucker-box five miles from Gundagai.

According to A L Lloyd at:
https://mainlynorfolk.info/trevor.lucas/songs/fivemilesfromgundagai.html

The bullock-driver with his wagon piled high with wool-bales, his eight or ten yoke of oxen, his long whip and fluent oaths, was eminent among the oldtime bushman. We hear of Slabface Bill, whose bullock team was so long, he'd a telephone wire running along the tips of the bullocks, from the polers to the lead. He'd an Aborigine for a helper, and whenever Bill wanted to stop, he would just ring through; the blackfellow would halt the lead bullocks, and twenty minutes later the polers could stop. Bill got a wrong number one day, and the team didn't halt in time and half the Tabratong wool-clip tipped into the Bogan River. Bill wasted two hours trying to ring the exchange to make his complaint; finally his curses burnt the cable and started the big bush fires of 1908.

One of the monuments of Australian folklore is the bullock teamsters' song about the dog that “shat” in the tucker-box five miles from Gundagai. On November 28, 1932, the Rt. Hon. J.A. Lyons, Prime Minister of Australia, unveiled a statue to this redoubtable dog at the point where O'Brien's Creek crosses the main Gundagai Road, the site of an oldtime bullockies' camping-ground. Dog and tucker-box are set on a plinth. [...] A dog souvenir shop is nearby, and the post-office puts on the local letters a special dog postmark. Such is fame in Australia. 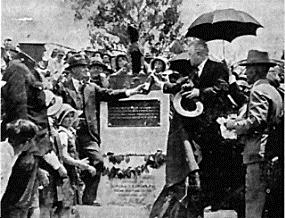