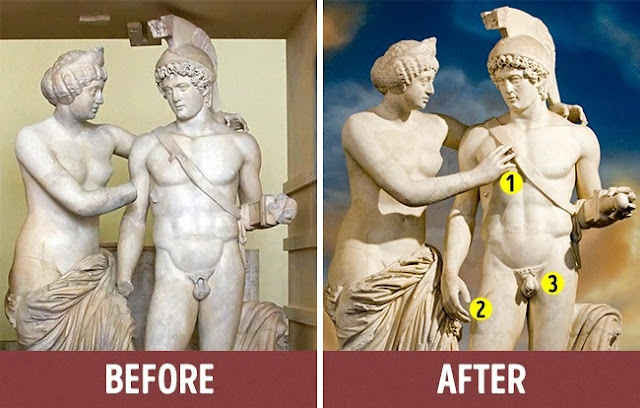 In 2010, workers installed statues of Mars and Venus (circa 175 AD) in front of the residence of Italian Prime Minister Silvio Berlusconi. The statues had been found with missing body parts.

Berlusconi ordered them to be restored. It turned out okay, but art critics did not appreciate the Prime Minister’s impulse. It is believed that remodeling monuments however one pleases is akin to vandalism because we do not know how the figures looked originally. After this criticism, Mars and Venus were returned to their initial state.
_________________ 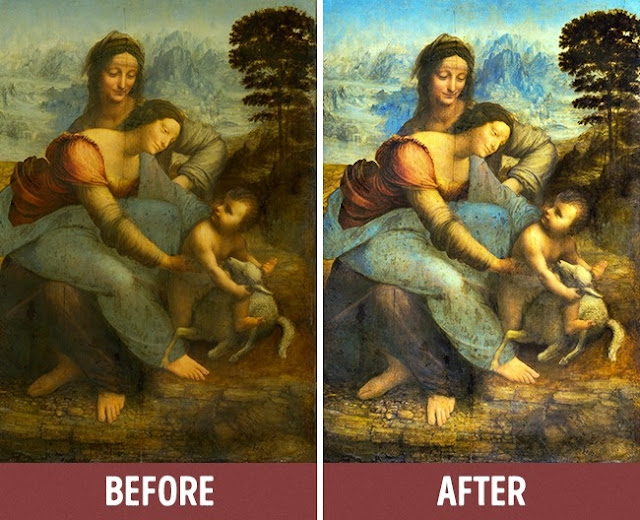 The Virgin and Child with St. Anne by Leonardo da Vinci was restored and came out much lighter. If earlier it was cloudy dark shades that prevailed, now the painting is dominated by bright colors, as if the action takes place on a sunny day. According to experts, this is contrary to da Vinci’s vision.

Some experts of the Louvre Committee even quit their jobs in protest against such a restoration. But is the work of restorers really so bad?
_________________ 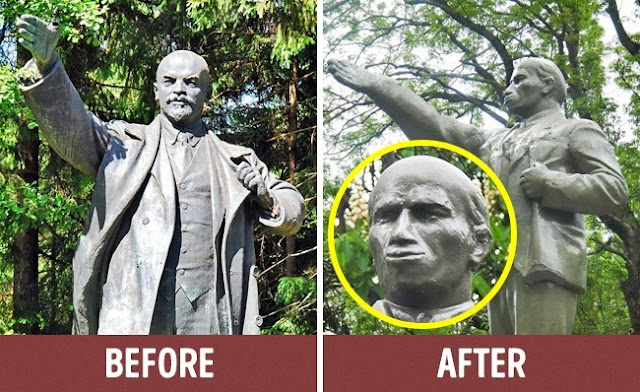 Every city in Russia has a Lenin statue. But the one in Krasnodar Krai was unlucky. After the restoration, it acquired a disproportionately long hand and someone else’s face.

It turns out the monument had such a look for a long time, but the photos did not circulate until 2016. The story even appeared on central television, after which the leader of the world proletariat got a makeover.
_________________

The Great Wall of China: 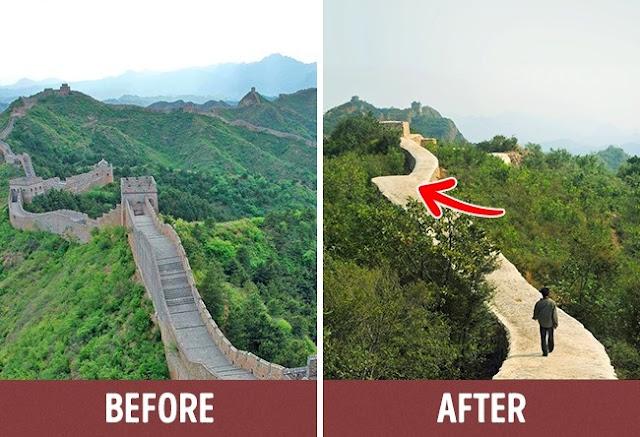 The Great Wall of China is the largest architectural monument on Earth, and, unfortunately, it is also slowly decaying.

Several years ago, restorers unsuccessfully reconstructed one of the most beautiful sections of the 780-meter-long wall, simply covering it with a layer of concrete. 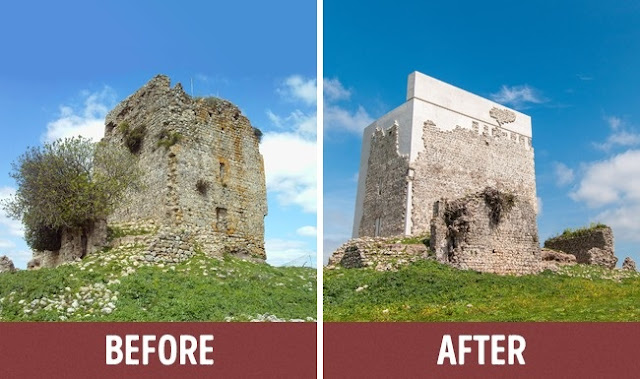 The reconstruction of the ancient fortress of Matrera in Spain was very controversial: the tower began to look too modern. It turned out that the restorer, Carlos Quevado, wanted to make it clear which parts of the fortress are new and which ones are ancient.

By the way, Architizer, an authoritative community of architects, took the side of Quevado. But the locals still weren’t happy.
_________________ 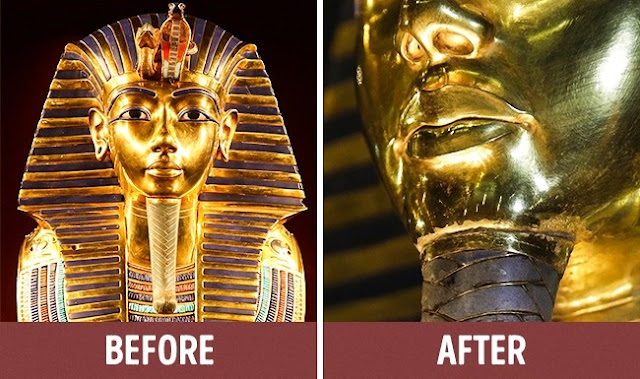 In 2014, an employee of the Cairo Museum dropped a 30-pound (10 kg) golden mask of Tutankhamun, and the beard broke off from the relic. Instead of going to the professionals, the woman turned to her husband, a restorer.

He stuck the beard back on with superglue. What’s more, he chose the wrong angle. At the same time, he stained Tutankhamun’s chin with glue and decided to scrape it off, making scratches. Fortunately, the mask has recently been restored properly.
_________________

A baby with someone else’s head: 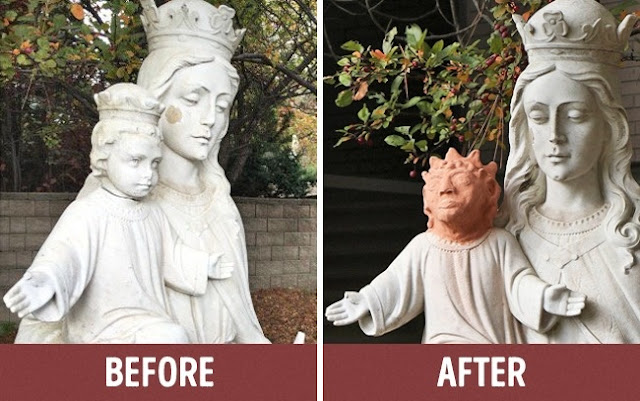 The sculpture of the Virgin Mary and Baby Jesus in Sudbury, Canada, once suffered at the hands of vandals: the baby’s head was chipped off and stolen.

Artist Heather Wise volunteered to make a new head, but the result of her work looked more than strange and provoked discontent among the locals.

But in the end, Heather’s actions played a positive role: the man who stole the real head got embarrassed and brought it back. The sculpture was restored.

Remember how in part 1 of this series there was a story of the elderly parishioner who sought to remedy her Spanish church’s deteriorating fresco of Jesus wearing the crown of thorns? The work was called Ecco Homo, “behold the man”, the Latin words used by Pilate to present a scourged Jesus to a hostile crowd. After the old lady’s attempt at restoration it was dubbed Ecco Mono, “behold the monkey”. 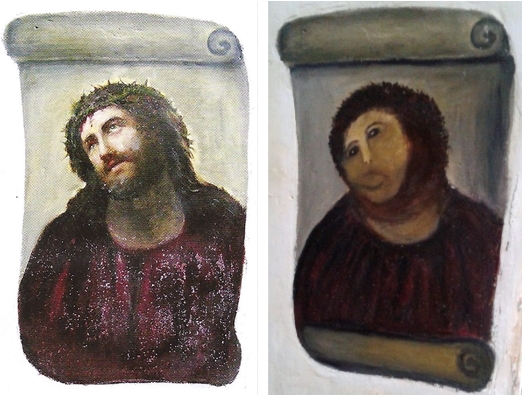 A new restoration fail in Spain is drawing comparisons with Ecco Mono. Instead of hiring an expert, a church hired a local art teacher to restore a carved-wood sculpture of Saint George.

Housed at the Church of San Miguel de Estella in Navarre, Spain, the sculpture shows a typical depiction of Saint George on horseback clad in armor and fighting a dragon. The sculpture was commissioned to be restored by the Parish priest of the church and was carried out by the local teacher. Unfortunately, the 500-year-old artwork now resembles something out of a Disney cartoon: The uniformity of the paint distribution has left Saint George with a pink face, beady eyes, and a garish red and gray suit of armor. 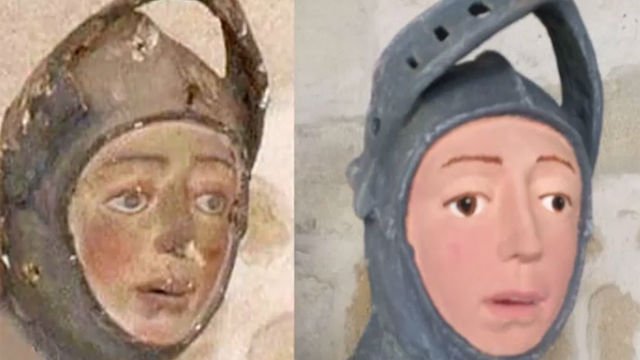 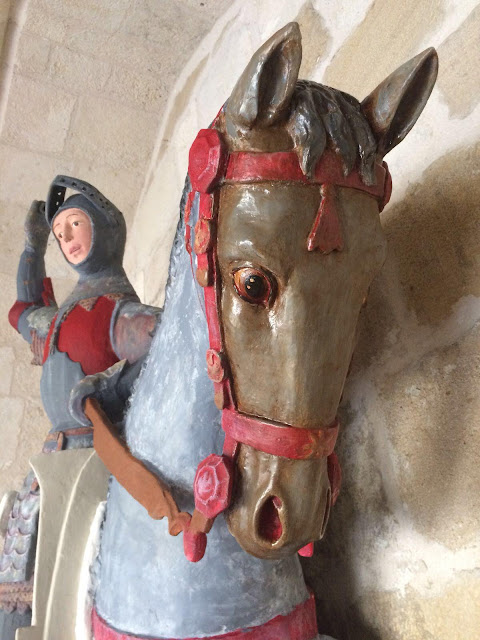