Aesop's Fable: The Wolf and the Shepherd 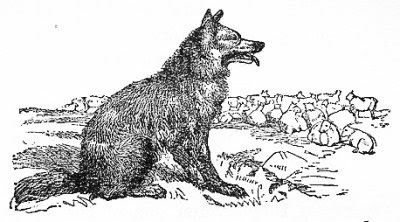 A WOLF followed a flock of sheep for a long time, and did not attempt to injure one of them.

The Shepherd at first stood on his guard against him, as against an enemy, and kept a strict watch over his movements. But when the Wolf, day after day, kept in the company of the sheep, and did not make the slightest effort to seize them, the Shepherd began to look upon him as a guardian of his flock rather than as a plotter of evil against it; and when occasion called him one day into the city, he left the sheep entirely in his charge.

The Wolf, now that he had the opportunity, fell upon the sheep, and destroyed the greater part of the flock. The Shepherd, on his return, finding his flock destroyed, exclaimed: I have been rightly served; why did I trust my sheep to a Wolf? 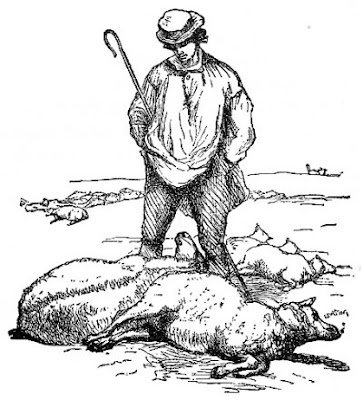 An evil mind will show in evil action, sooner or later.

The Shepherd had obviously never heard the moral of the Frog and the Scorpion: 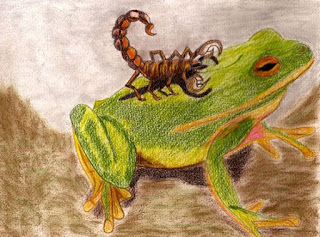 The scorpion climbs on the frog’s back and the frog begins to swim across the river.

Halfway across the river, the scorpion stings the frog.

The dying frog asks, “Scorpion, why did you sting me?”

The scorpion answers, “I’m a scorpion. It’s my nature.”

Aesop has a similar tale called the Farmer and the Snake: A Farmer walked through his field one cold winter morning. On the ground lay a Snake, stiff and frozen with the cold. The Farmer knew how deadly the Snake could be, and yet he picked it up and put it in his bosom to warm it back to life.

The Snake soon revived, and when it had enough strength, bit the man who had been so kind to it. The bite was deadly and the Farmer felt that he must die. As he drew his last breath, he said to those standing around, "Learn from my fate not to take pity on a scoundrel."

Some food for thought, and some lessons, there.