I have previously posted items from the website “We Want Plates”, where contributors post pics and comments about wanky serving methods that focus more on the ridiculous presentations than on the taste of what is being served. The site was started because it’s founder wanted to vent his spleen about a ridiculous serving and could find no place where he could do so. Apparently a lot of the public agree. I have experienced occasions when I have exclaimed “We want plates!”

Here are more examples, with site headings and reader comments, from the website “We Want Plates!" at:
https://www.reddit.com/r/WeWantPlates/
and
http://wewantplates.com/
followed by a recent selection posted on Bored Panda at:
https://www.boredpanda.com/weird-food-serving-restaurants-we-want-plates/?utm_source=newsletter&utm_medium=referral&utm_campaign=Newsletter
_________________

Pudding in a half-pint glass: 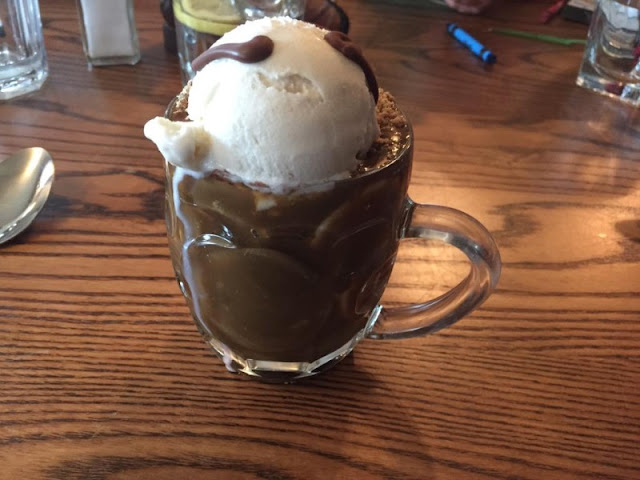 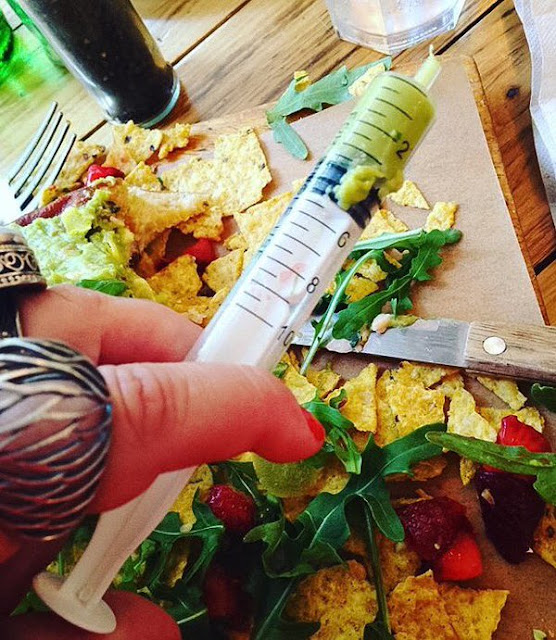 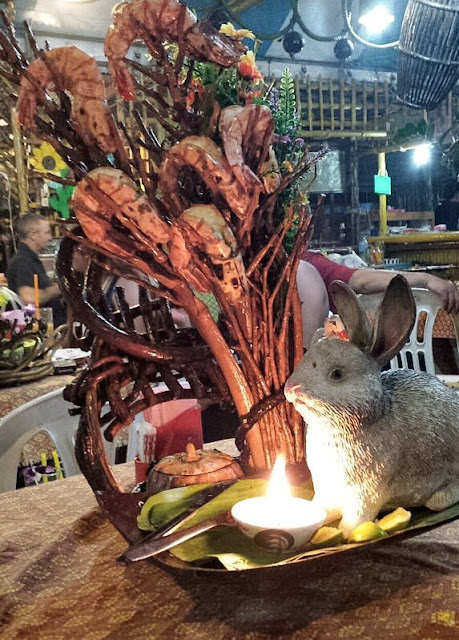 Hot wings with a toe bag: 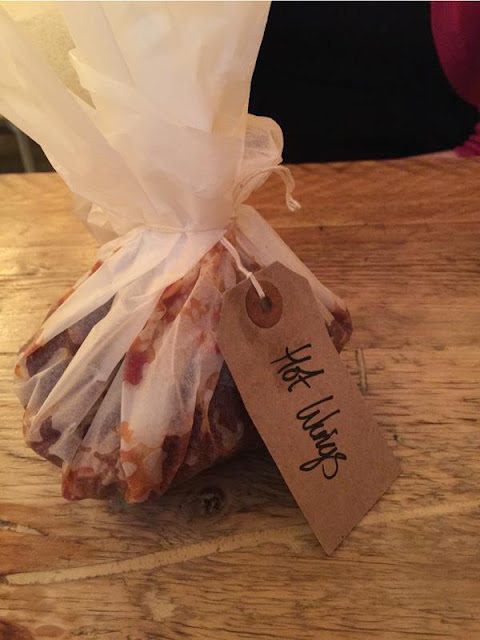 Scotch egg in a trophy: 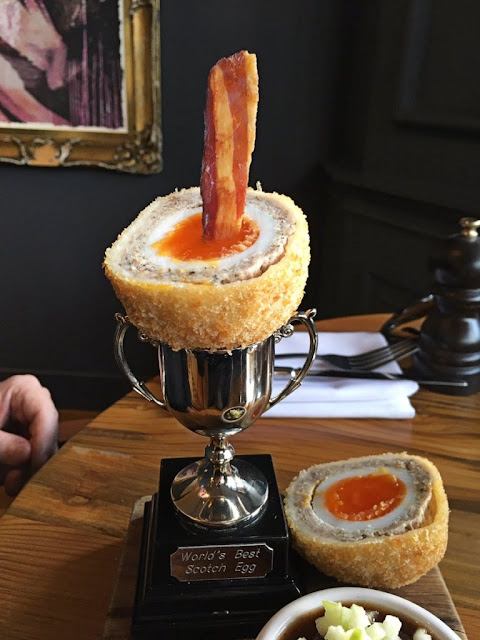 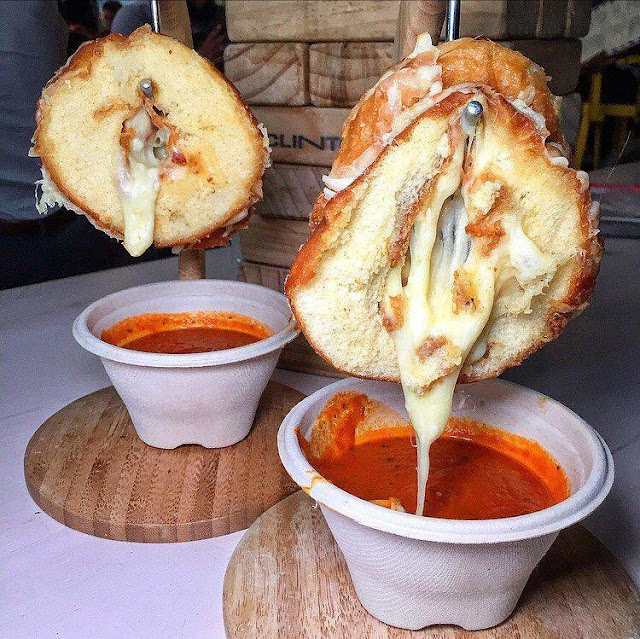 It uh...almost needs a NSFW label. 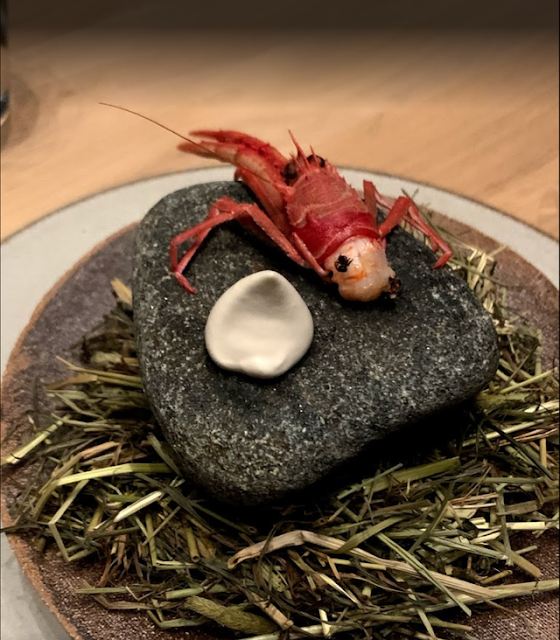 Which part is the food?

Yea is the hay like stuff food? Is it decorative?

The only way to justify this is if the hay is edible, and the black rock, white stuff and crawfish is part of an elaborate cake

Is that a single crawfish?!

I think explanation is absolutely needed!

One crawfish wouldn't even feed a second crawfish.

Idk how much this costs but no matter what it isn't worth it. You don't eat just one. A seat at a crawfish boil with live music is only 10 dollars!

That's why I love being in Cajun country. I haven't paid for crawfish in years. Old Maw Maw gonna cook up some for ya sha.

It’s like when you don’t want to dirty a plate.... 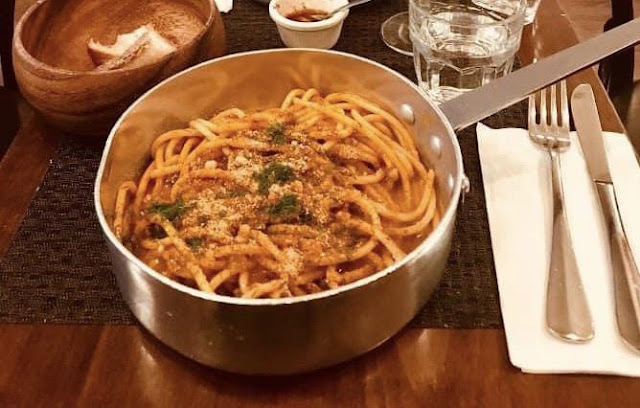 cold pasta is the best breakfast

Just don't try cold baguette. It's not worth the trip to the dentist.

see, as a concept i don't mind this but i can't get shake the feeling of the metal fork scraping against the bottom

I hate it as a concept. What's wrong with a plate? Why use what's probably a fresh pan? 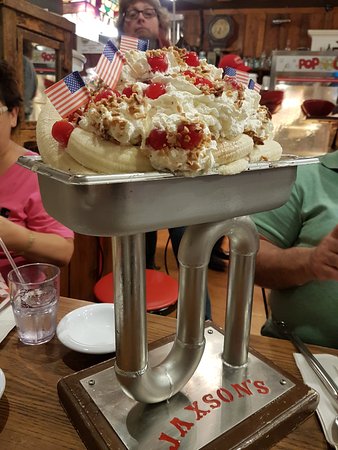 I have to say... I don't get the whole American flags all over the thing... I have not seen anyone here in Ireland put 27 Irish flags in Guinness stew.

The 'drain' is presumably closed so kinda cute.

Also...it wouldn't happen to be called the 'Everything including the kitchen sink Sundae', would it?

Oh yeah! I went to many birthday parties at Jaxson’s as a kid. I mean thinking about it now is nauseating but it was a blast as a kid.

It's a stainless steel storage pan decorated to look like a sink. I would still need a bowl and 10 friends, but it's definitely hygienic.

Most Expensive Restaurant I've Ever Been. Chef Literally Made The Starter In Our Hand: 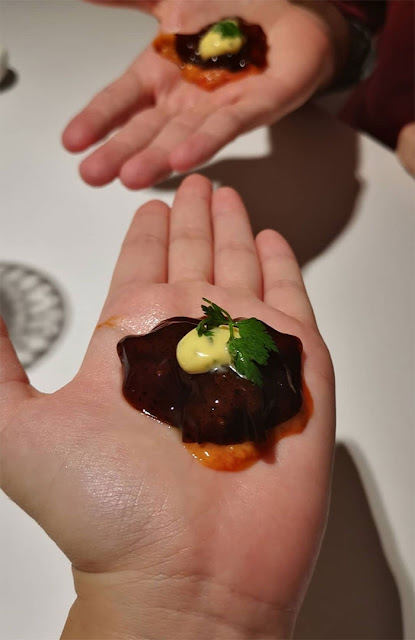 Ug! It reminds me of a blood clot.

It usually doesn't have parsley on top.. but yeah..

Oh good god. I think I just threw up a little.

Maybe that's why the chef makes it in your hand--so you KNOW it's not!

Here's My Cocktail. With Ducks. In A Bath: 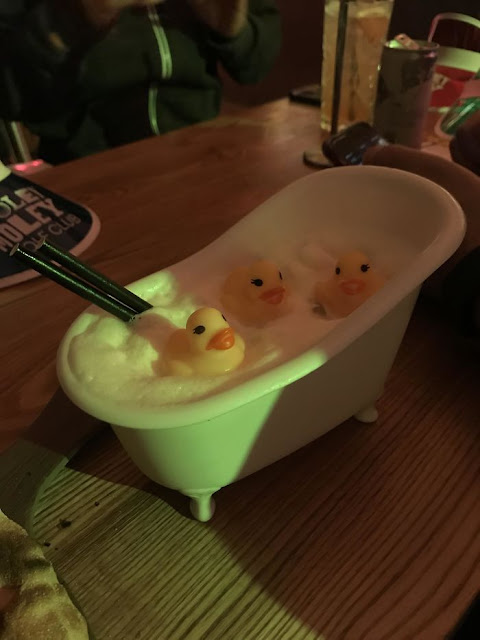 Those ducks are so cute, I would totally play with them while I'm drinking and maybe keep one

whaha this one is not bad, find it creative to be honest.

Maybe for an ice cream float kind of thing this would work. But not a cocktail.

Rubber ducks get slimy and moldy inside. No way these things get excruciatingly cleaned after every use. Maybe not with alcohol, but with water. You have to get all the water out after cleaning. Dirty ducks.

Only if they have a hole at the bottom, not all do. And you can toss them in the dishwasher to be sterilized. I did this with my daughter's bath toys when she was an infant. I won't buy the ones with holes because of the mold issue. The ones gifted to us never go near water

That's no cocktail... it's a ducktail!

I think I could order this only after a few shots of something else.

Though This Really Is The Stairway To Heaven: 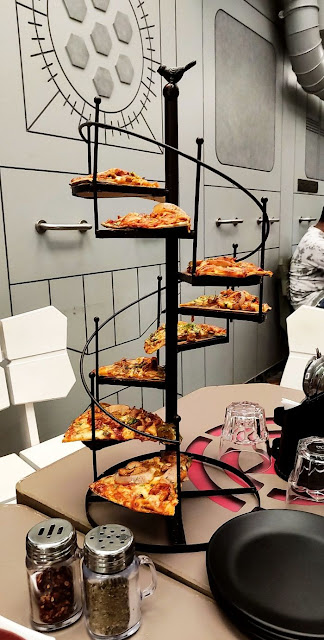 Do they have a massive sink to wash that? or just re-use for next customer?

Like the idea but this would make the pizza get cold very quickly, so it’s a no from me!

Not to mention they unnecessarily handled each piece of pizza to get it on there, also taking time to let it get cold instead of getting it straight to the table.

This makes me feel like someone man-handled my pizza....not sure I'd eat that....

What even was it pre-pizza? A spiral staircase for gnomes?

My Friend Was Served A Single Potato On A Tiny Chair: 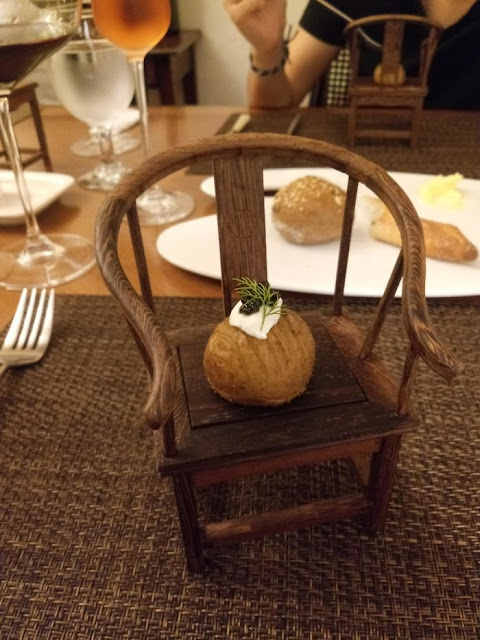 I would probably be laughing too much to even eat it. It's so cute and ridiculous at the same time.

Carrot served on a telephone: 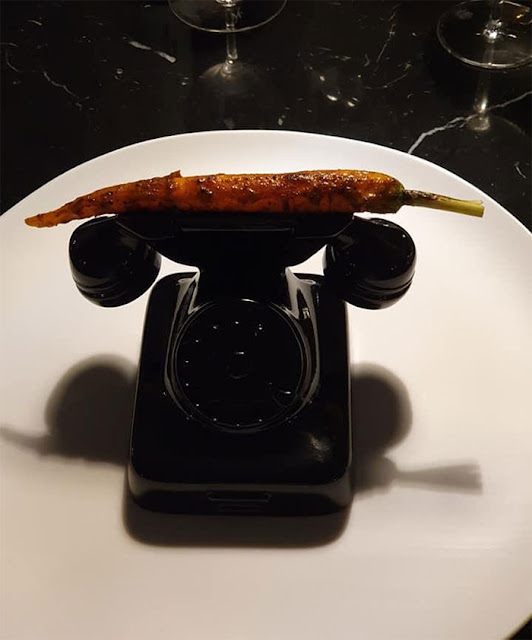 Not just....why? More like WTF and you charged me how much for it?!

One carrot. That’s it. That’s the whole entree.

Unless the phone is edible I’d send this back and ask where the hell the rest of my food is? Really don’t get food snobs.

This looks like something Salvador Dali would have done.

That is literally the only acceptable explanation for this. I've been to his house (which is preserved as a museum) and it's full of bonkers stuff like this, including a lobster-phone, if I remember rightly.

Waste of a nice telephone

Spaghetti bolognese in a bread cone: 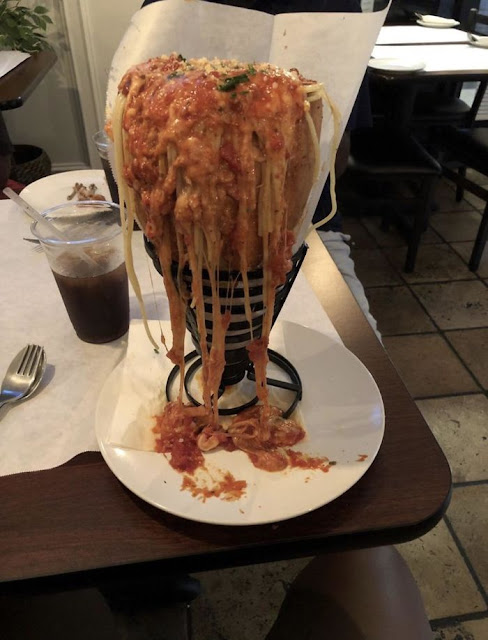 How is it possible to make one of the best meals to eat, universally loved, look SO unappealing...

Saw A Bird Nest Post Here And Thought This Was Comparable: 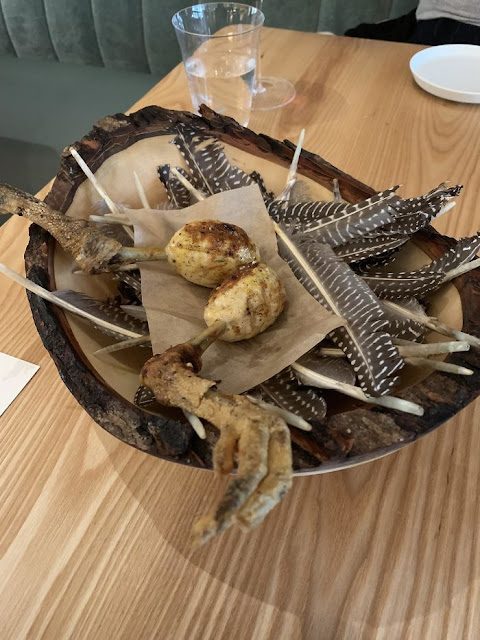 Did they hit that with a car?

Lol my bf worked as a cook in a fancy restaurant with a long driveway: some diners reported a poor pukeko (chicken sized native bird) was dead in the drive, hit by a car. My bf was sent out to remove it (to dispose of!) But as he had his kitchen uniform on he get a lot of horrified looks from ppl lol. Shouldn't be worn his kitchen gear out there XD

That's either a strategy to turn people vegetarian/vegan or to revive their hunter gatherer instincts :))

chicken feet are a delicacy where I'm from, but THAT is definitely not appetizing looking

Are you from Malaysia. I lived there for a while and I couldn't do the chicken feet or the fish with heads and eyes. NOPE

They're working REAL hard to remind you that your food was a loving creature before you eat it.

Why would anyone think that’s a good idea for presentation?

At least there is no denying you’re eating a dead body as you hold hands with it...

It’s Getting Out Of Hand: 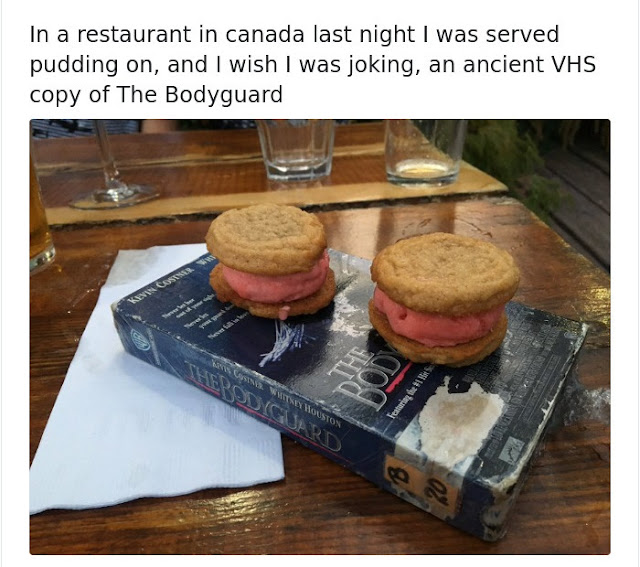 Why would you want food on some decrepit, dirty, yard sale find?

And look how clean it looks. Did the diarrhea end, yet?

Okay, I realize this is entirely not the point, but it's how my mind works; Why is it The Bodyguard? Is there a reason for THAT movie that I'm not getting? Do they just have a massive backlog of video cassettes in the kitchen that they rotate through? Do you have the option to take your movie/plate home at the end of the meal, and if not, could you conceivably steal it and the wait staff not notice, just to show your friends and tell the tale? I MUST KNOW THESE THINGS O.O

wait... do you still have a VHS player?

How can that be sanitary, I mean you can't wash the VHS cover in hot soapy water.

That's the real problem. It may be weird, it may look bad, but the worst part is you just cannot clean that. Even if you use it once and throw it out, there is no way to clean it properly for the first use.

Pudding also look ancient to me. I am sorry.

Oh yes Madame, here we have your side of dysentery for dessert. Enjoy.

That Jello tasted alright, nothing special: 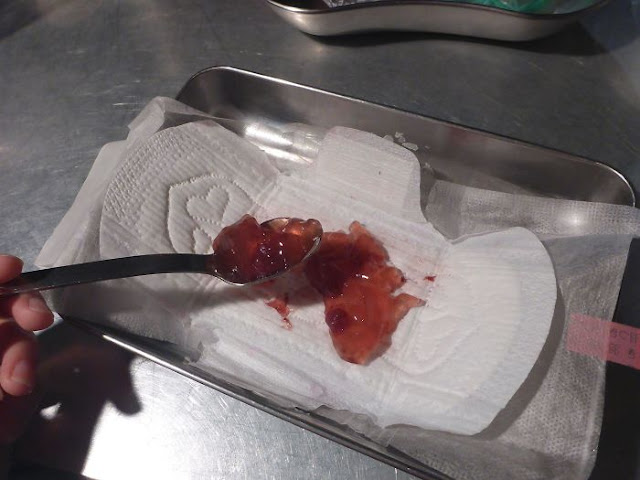 I'm a woman but oh that is just utterly disgusting.

I'm a man and I agree. It definitely is disgusting.

I cannot say how enormously big is my NO for this...

This has to be a joke right

Thats nasty as hell and no way food safe. Most pads have some sort of perfume/ deoderizer in them

I do not believe for one second that this was served in a restaurant. No one could be that oblivious to how truly disgusting this is. I call BS!

Given the dish the pad is served in makes we wonder whether this is really in a restaurant, or whether it's just a joke played at some sort of nurse's leaving or graduation party or something. (The diner's short and clean finger nails would further indicate medical profession.)

I was thinking the same - how many restaurants have stainless steel tables like that? Looks more like a mortuary table. Which would also fit with the dark sense of humour.

Not a plate, but an actual glass would be nice: 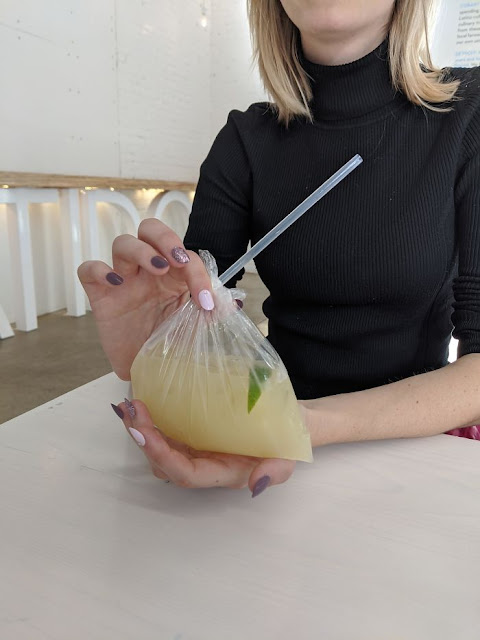 that's what you get for a few cents from a street hawker, not in a fancy ass restaurant where you pay extra for dine in service.

If you can't put your drink down, you will drink it faster and either order another one quickly or leave early...win for the restaurant

I lived in Malaysia for several years and this is how most fast places and food stalls/food trucks hand you the drinks.

Oh some latin american sell their drinks like this, especially street vendors. But that looks like a fancy restaurant so idk

That's pretty common in Asia, when you get a drink from a street vendor.

Check to see if there is a fish in there. 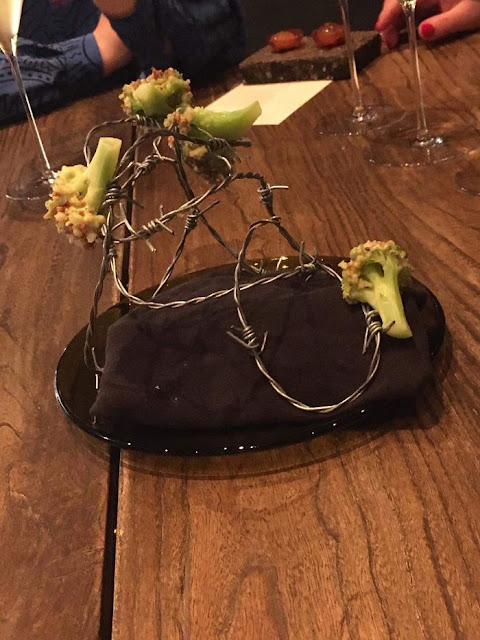 Just 4 pieces? That better be gold flakes on the sh*t if I got to pry it off of Bob wire.

Think of all their comrades who didn't even make it to the fence...

And you wonder why kids won't eat broccoli

Okay, this one I understand. Broccoli deserves bad things happening to it.
Posted by BytesMaster at 12:08 AM