The buttered cat paradox is a tongue-in-cheek combination of two adages:

- cats always land on their feet;

The paradox arises when a piece of buttered toast is strapped to the back of a cat, buttered side up, and the cat is then dropped off a building at a great height.

The question then is: which lands first, the toast, or the feet of the cat?

There has, however, been considerable debate and humorous conjecture about the possibility of the two opposing forces causing the cat to go into a faster and faster spin as the two forces act against each other.

There is further conjecture that as the cat nears the ground it will end up hovering in a steady state. 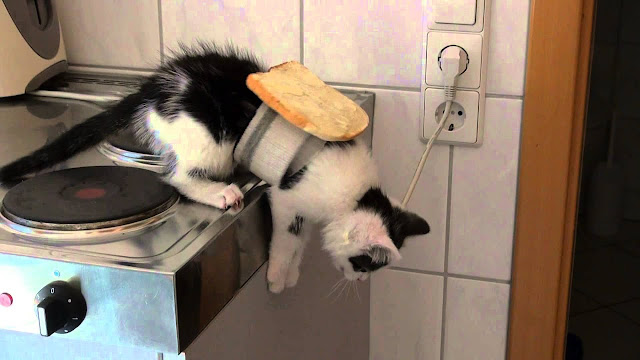 - There is a detailed analysis of the paradox in the comments section, and an application to the principles of hovercraft, at:
http://echochamber.me/viewtopic.php?f=18&t=30263

- For the practical application of the buttered cat paradox as an antigravity vortex (also known as a “gravitic warp”), see: :
http://uncyclopedia.wikia.com/wiki/Murphy%27s_law_application_for_antigravitatory_cats

A YouTube video on the paradox is at:
http://www.youtube.com/watch?v=wvRzWYCZ2e0&eurl=http%3A%2F%2Fwww%2Ebibi%2Eorg%2Fbox%2Farchives%2F2007%2F02%2Fbuttered%5Fcat%5Fparadox%2Ehtml&feature=player_embedded

I like the comment from one person in response: “I tried it, but my cat went totally flat when I put it under the train and it refuses to meow anymore."