From Steve M, in response to the post showing sexist ads of yesteryear:

Amazing Bytes today Otto, just love the old ads. How things have changed... no longer are women chained to the sink wearing seductive underwear, forever ready to serve their hard working husbands when they return from work... and they call that progress? Terrific stuff Otto. Really fun. Thank you.

PS: please don’t show this email to my wife!

Also from Steve M, this time responding to the Phillip Larkin Poem “This be the Verse”:

A great Bytes today Otto, the Philip Larkin poem. So much wisdom and so much truth there. I found it very moving.

From Maria B in response to the street art pics and to the following Quote for the Day: 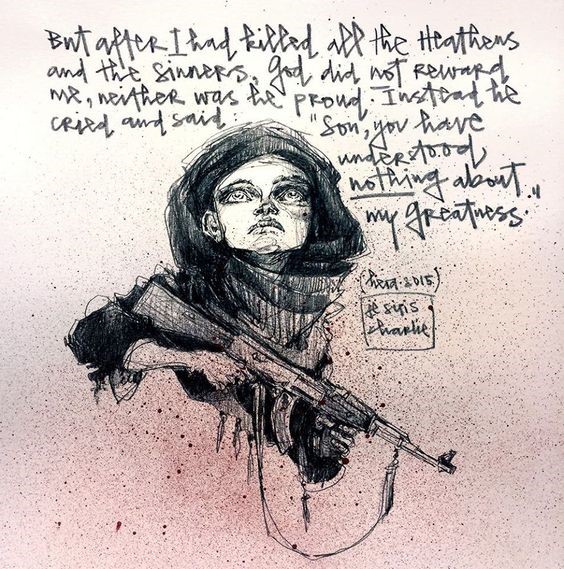 Hello Otto
How very true – we have learned nothing from war!
He who lives by the sword dies by the sword!
I love the paintings!!
They have really brighten my morning!!
Thank you!
Love Maria

From David C B, in response to the following Funny Friday joke:

Two lawyers went into a diner and ordered two drinks.
Then they produced sandwiches from their briefcases and started to eat.
The owner became quite concerned and marched over and told them, “You can't eat your own sandwiches in here!”
The lawyers looked at each other, shrugged their shoulders and then exchanged sandwiches.

There is a nice continuation to joke about two lawyers eating their own food in the diner.

After they exchange sandwiches the even more irate owner yells "You can only eat food in this diner if you buy it in the diner!!" At which point he two lawyers exchange dollar bills.

From Charlie Z, who commented that he relates to the Patience one . . .

I WAS DRINKING AT A BAR SO I TOOK A BUS HOME. THAT MAY NOT SEEM LIKE A BIG DEAL TO YOU, BUT I'VE NEVER DRIVEN A BUS BEFORE.

I THOUGHT GETTING OLDER WOULD TAKE LONGER.

A WISE MAN ONCE SAID NOTHING.

RESPECT YOUR ELDERS; THEY GRADUATED FROM SCHOOL WITHOUT THE INTERNET.

I'VE DECIDED I'M NOT OLD; I'M 25 PLUS SHIPPING AND HANDLING.

BEHIND EVERY ANGRY WOMAN STANDS A MAN WHO HAS ABSOLUTELY NO IDEA WHAT HE DID WRONG.

INSTEAD OF "SINGLE" AS A MARITAL STATUS I PREFER "INDEPENDENTLY OWNED AND OPERATED".

PATIENCE: WHAT YOU HAVE WHEN THERE ARE TOO MANY WITNESSES.

I LOOK AT PEOPLE AND SOMETIMES THINK..."REALLY? THAT'S THE SPERM THAT WON?"

IN MY DEFENSE I WAS LEFT UNSUPERVISED.

MY DECISION-MAKING SKILLS CLOSELY RESEMBLE THOSE OF A SQUIRREL WHEN CROSSING THE ROAD.

SOME THINGS ARE JUST BETTER LEFT UNSAID. AND I USUALLY REALIZE IT RIGHT AFTER I SAY THEM.

CAMPING: WHERE YOU SPEND A SMALL FORTUNE TO LIVE LIKE A HOMELESS PERSON.

IF MY BODY IS EVER FOUND ON A JOGGING TRAIL JUST KNOW THAT I WAS MURDERED SOMEWHERE ELSE AND DUMPED THERE.

IF MONEY IS THE ROOT OF ALL EVIL, WHY DO CHURCHES BEG FOR IT?

Posted by BytesMaster at 6:09 AM