Judge called for jury duty in own case:

A news item from last week reported that Judge Keith Cutler, the senior resident judge of Winchester and Salisbury since 2009, told a jury in Salisbury Crown Court that he had been called for jury duty in that case.  According to the judge:

“I was selected for jury service here at Salisbury Crown Court for a trial starting April 23. I told the Jury Central Summoning Bureau that I thought I would be inappropriate seeing I happened to be the judge and knew all the papers.  They wrote back to me, they picked up on the fact I was the judge but said ‘Your appeal for refusal has been rejected but you could apply to the resident judge’, but I told them ‘I am the resident judge’.  I had to phone them up and they realised it was a mistake.” 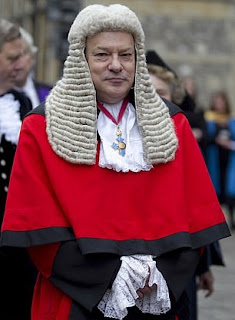 I was reading up on the Simon & Garfunkel song “America” (“Let us be lovers, we’ll marry our fortunes together . . . “) and came across some references to Saginaw. Remember the line “It took me four days to hitchhike from Saginaw . . .”?

The song was written and composed by Paul Simon, and concerns young lovers hitchhiking their way across the United States, in search of "America," in both a literal and figurative sense. It was inspired by a 1964 road trip that Simon took with his then girlfriend Kathy Chitty.

In 2004, Bob Dyer, a former disc jockey from Saginaw, Michigan, explained how Simon wrote the song when visiting Saginaw in 1966.  Dyer had booked Simon for a concert series hosted by the Saginaw YMCA.

I asked Paul Simon if they were still charging the $1,250 we paid them to play and he said they were getting about four times that much then. Then I asked him why he hadn't pulled out, and he said he had to see what a city named Saginaw looked like. Apparently, he liked it; he wrote 'America' while he was here, including that line about taking four days to hitchhike from Saginaw.

In 2010, lyrics from the song began appearing spray-painted on vacant buildings and abandoned factories in the town of Saginaw, Michigan, which is mentioned in the song. The group of artists, Paint Saginaw, decided to paint the phrases after the population had dwindled vastly.  The song's entire lyrics are painted on 28 buildings in the city, including railroad tracks and bridge supports. 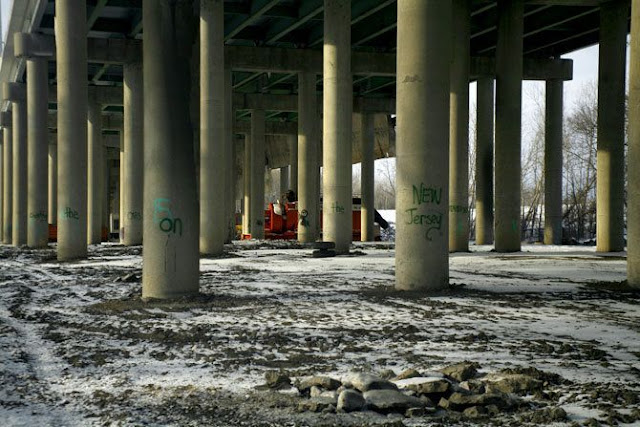 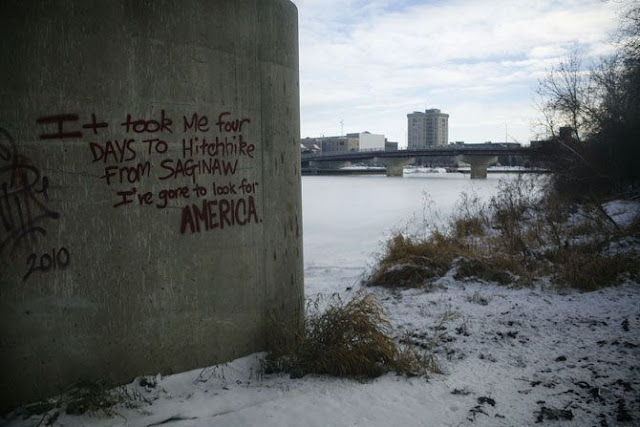 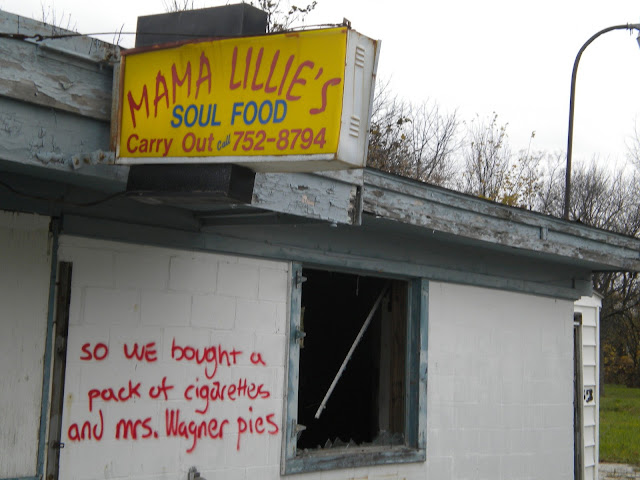 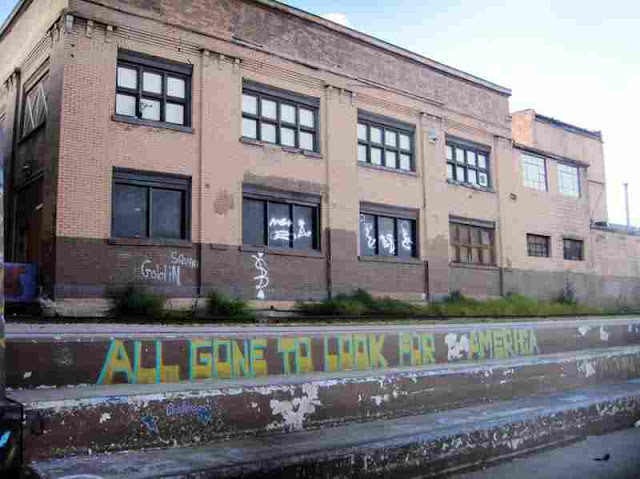 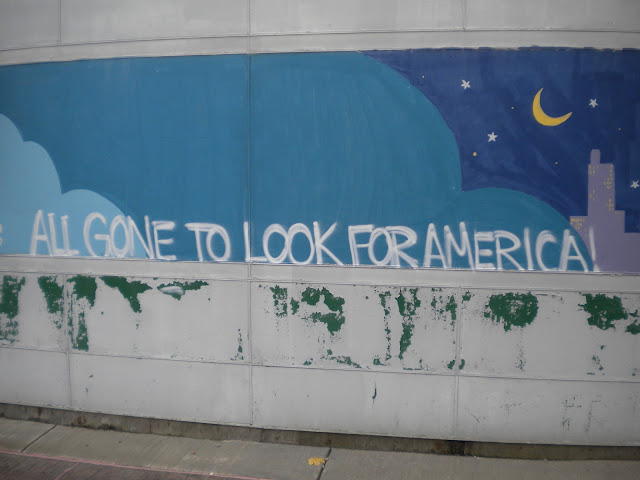 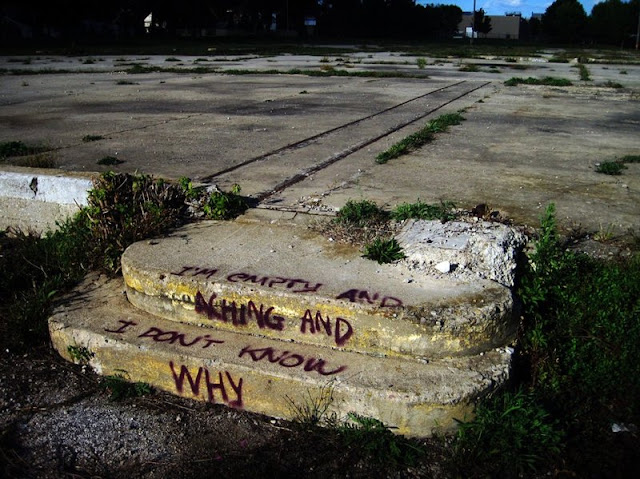 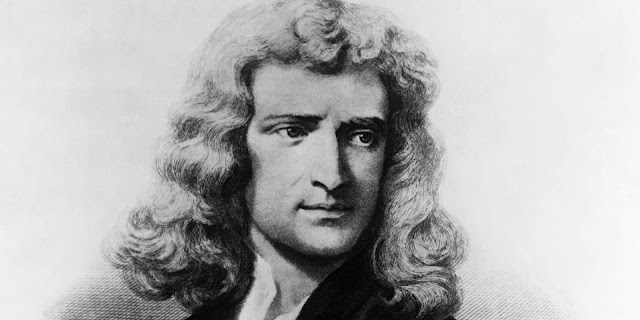 Sir Isaac Newton (1642 – 1726) was an English mathematician, physicist, astronomer, theologian, and author who is widely recognised as one of the most influential scientists of all time and a key figure in the scientific revolution. His book Philosophiæ Naturalis Principia Mathematica ("Mathematical Principles of Natural Philosophy"), first published in 1687, laid the foundations of classical mechanics. Newton also made seminal contributions to optics, and shares credit with Gottfried Wilhelm Leibniz for developing the infinitesimal calculus, whatever tis.

What is lesser known is his sticking a needle in his eye and moving it around as a means of testing on himself.  What???

As noted above, Newton studied, amongst other things, optics.

Wondering whether the ability to see colours was influenced by the eye, Newton stuck a bodkin between his eyelid and eye and dug around the backside of his eyeball.

How do we know all this?  Because like Samuel Pepys and his diary, he recorded it in his notebooks, even including illustrations: 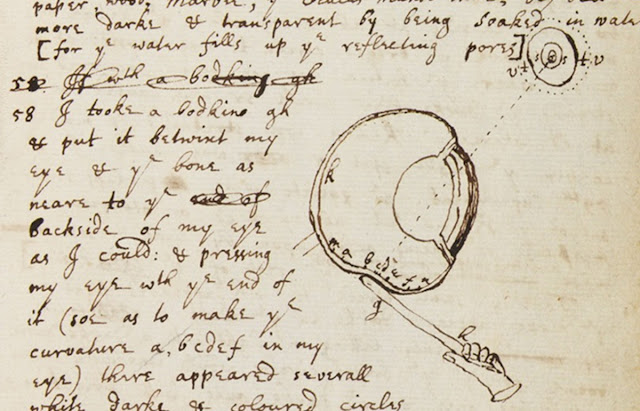 He learned that, when you poke yourself in the eye, you disrupt your vision.  When he stuck the bodkin between his eyeball and his eye socket, “as neare to backside of my eye as I could”, then he saw spots.  Those spots were clearest “when I continued to rub my eye [with the] point of bodkine”.

A man of vision indeed.