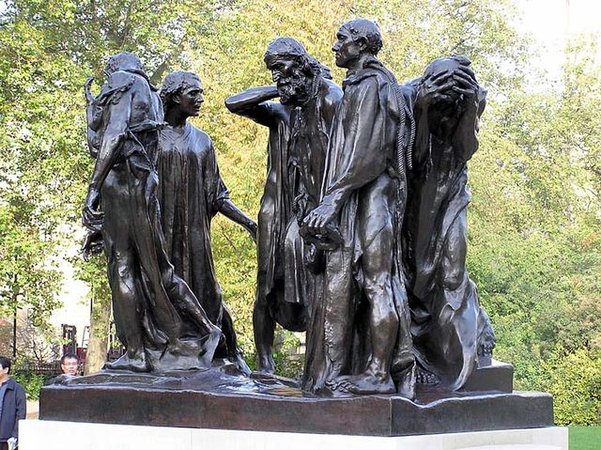 Three readers sent me emails after I posted the Bytes item about Rodin’s sculpture The Burghers of Calais, all three readers having the same, or similar, idea . . .

First cab off the rank was Steve M, who said:

I thought I would help you out with your Bytes today – you seem to have missed a few
Calais Burghers. The following link may assist:THE BEST 10 Burgers in Calais, Francehttps://www.yelp.com/search?cflt=burgers&find_loc=CALAISCome on Otto... get your act together mate... the standards are dropping somewhat;

Next came Graham E, who suggested that do I do a Bytes on the following: 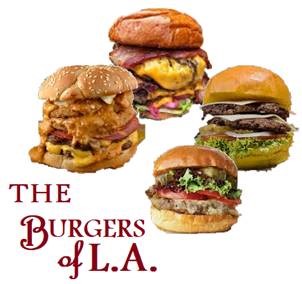 Final email was from David B, who wrote:

Loved your article on the famous sculpture(s).  But it reignited a mischievous query:  is there a fast food joint in that French city called "Burgers of Calais"

I haven’t been able to find a business in Calais by that name.

David, you may be interested in the following item from the Telegraph (UK) by Henry Samuel from 3 August 2016:

Le burger’ now top selling dish in French restaurants, new study reveals:
New figures suggest the decidedly un-French burger is served in 75 per cent of French eateries from the most humble fast food outlets to top-notch restaurants.
For the guardians of French gastronomy, the prospect of being served something as unsophisticated as a slab of mincemeat with a bap and slice of cheese would long have been considered sacrilegious.
Today, however, the tables have turned. In a culinary revolution, three quarters of French restaurants now sell hamburgers and 80 per cent of these say it has become their top-selling dish, according to a new study.
“Le burger” – as the French dub the quintessentially American invention to the despair of linguistic purists of the Académie Française – has become a feature of even the most illustrious eateries.
Indeed, such is its success that sales are set to overtake those of the classic “jambon beurre” (ham and butter baguette), the nation’s staple lunchtime sandwich.
Last year, the French chomped their way through 1.19 billion burgers, an 11 per cent rise on the previous year, while “le jambon beurre” fell to 1.23 billion.
“Burger mania (in France) is unstoppable,” declared Bernard Boutboul, head of Gira Conseil, the food consultancy behind the study. 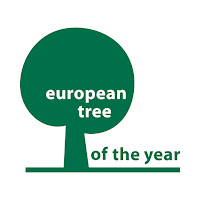 Following from the look at the nominated trees, the first, second and third places in the European Tree of the Year competition were announced on 19 March 2019,  They are: 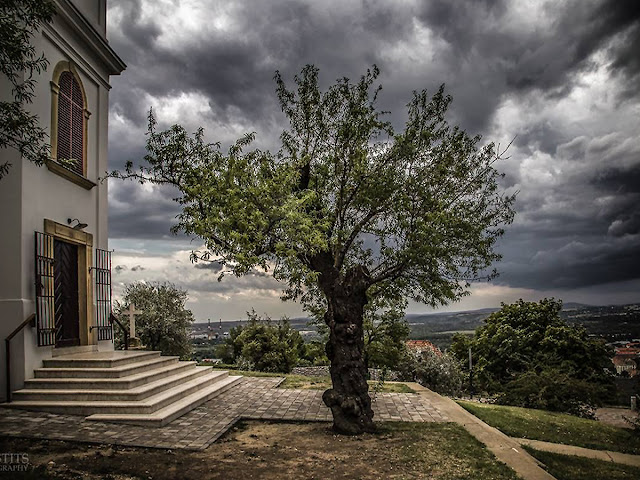 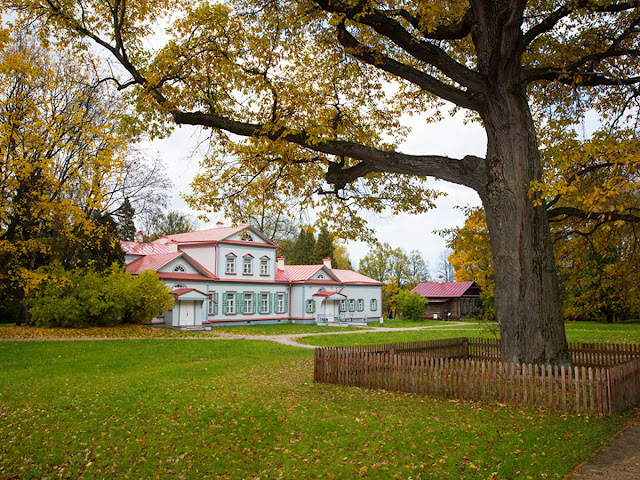 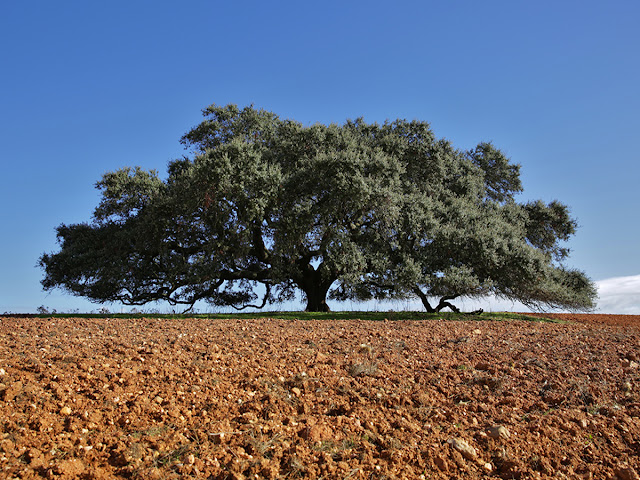 Victorian Tree of the Year:

Did you know that Victoria in Oz has a Tree of the Year competition?

It’s done through the National Trust, the link is: https://www.nationaltrust.org.au/treeoftheyear/

The 2018 winner was the Lollipop tree (Monterey Pine) at the Parks Victoria Mount Beckworth Scenic Reserve. receiving 351 of the total 830 votes. 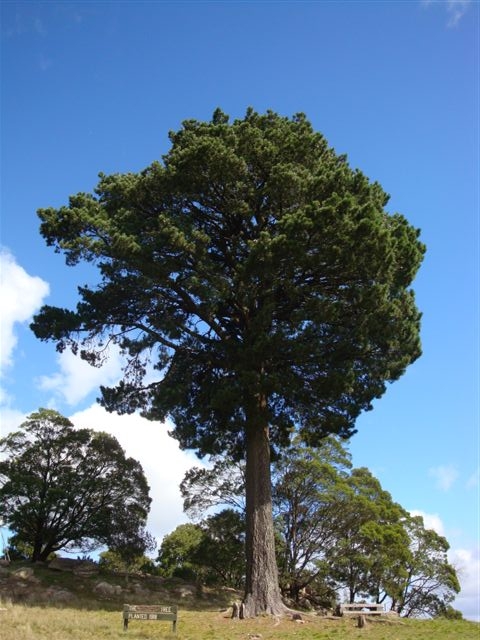 About:
This tree is located in the Mount Beckworth Scenic Reserve. The "Lollipop" is one of five trees planted in 1918 by Mr Jack Scarfe, a forest overseer from Maryborough, and four schoolboys; Arch Andrews, William Young, Francis Kinersley and Colin Drife. One tree died and 3 others were cut down during World War II. This tree is a well known landmark in the district as it can be seen from almost any direction for up to 50kms. The tree was used for practice bomb-aiming sorties by the RAAF during World War II. The airmen were based at the Ballarat Aerodrome during this time. It is particularly vigorous and healthy specimen of a very widespread species, The name comes from the spherical shape of the crown; unusual for the species, and a result of low pruning of branches in the 1940s and wind pruning of the crown. 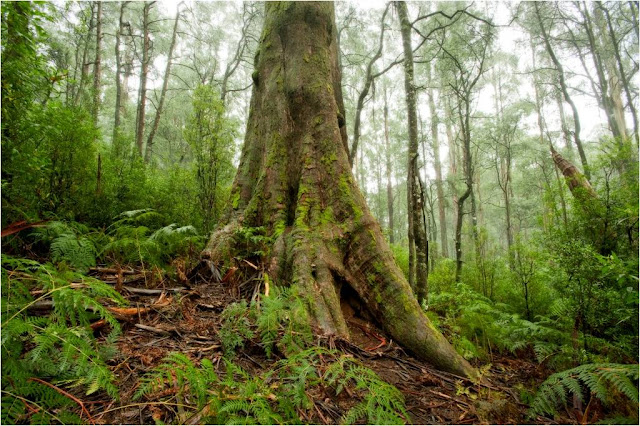 The 'Kalatha Giant' Mountain Ash (Eucalyptus regans) is significant at a State level for its outstanding size and social significance.

About:
The 'Kalatha Giant' is a very large Eucalyptus regnans approximately 400 years old. It is currently one of the largest living trees in Victoria. It bears a very old fire scar at its heavily buttressed base (possibly from fires in 1851) and is hollow all the way up its trunk to where the top is broken off. Nevertheless, it is in good health for its age. It is in an area of Toolangi State Forest that has a history of selective logging in the early twentieth century, and there has been more recent clear felling of coupes in the surrounding area. Two-thirds of the State Forest was burned in the 2009 Black Saturday Fires and the 'Kalatha Giant' is in a tiny area that survived unburnt. During the bushfire recovery after Black Saturday, the Toolangi & Castella District Community House (supported by the Victorian Bushfire Appeal Fund) built a walking trail to tell the story of the Kalatha Giant and the forest in which it grows, with a boardwalk around the tree to protect the soil from increasing numbers of visitors. For many, it has become a symbol of bushfire resilience.