Good morning, readers, unless you are overseas, in which case it may be good afternoon, I suppose.

I have been without a computer since Sunday night when my HP laptop, less than 3 months old, refused to charge or hold a charge and ended up as dead as the Monty Python parrot. It has ceased to be, expired and gone to meet its maker. It is a laptop no more. It has rung down the curtain and joined the choir invisible.

Fortunately HP replaced it but that left me with getting our computer geek chappie to transfer all the data and restoring settings. 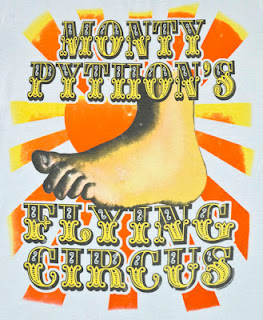 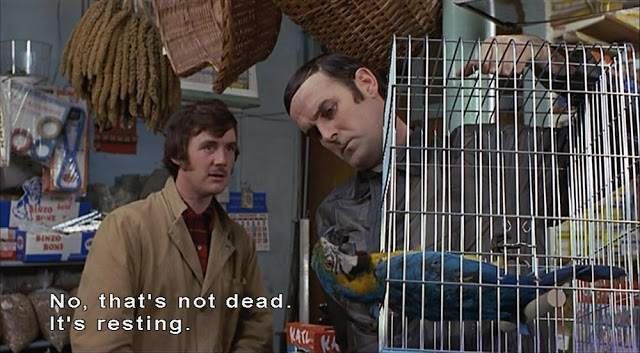 The Dead Parrot Sketch, from the first season, is one of their best known and most famous sketches. In it John Cleese plays Mr Praline, a dissatisfied customer who has purchased a Norwegian Blue parrot from a shopkeeper, played by Michael Palin. The owner of the store refuses to acknowledge that the parrot is dead and offers a variety of explanations and alternatives, causing Mr Praline to become more and more exasperated.

(The sketch was inspired by a used car salesman who wouldn't acknowledge gross defects in a car sold by him).

See the sketch at:
https://www.youtube.com/watch?v=-SB4gB3DEhA
The cast:

The sketch:
A customer enters a pet shop.

Mr. Praline: 'Ello, I wish to register a complaint.

(The owner does not respond.)

Owner: What do you mean "miss"?

Mr. Praline: (pause)I'm sorry, I have a cold. I wish to make a complaint!

Mr. Praline: Never mind that, my lad. I wish to complain about this parrot what I purchased not half an hour ago from this very boutique.

Mr. Praline: Look, matey, I know a dead parrot when I see one, and I'm looking at one right now.

Mr. Praline: The plumage don't enter into it. It's stone dead.

Mr. Praline: All right then, if he's restin', I'll wake him up! (shouting at the cage) 'Ello, Mister Polly Parrot! I've got a lovely fresh cuttle fish for you if you show...

Owner: There, he moved!

Mr. Praline: No, he didn't, that was you hitting the cage!

Owner: I never, never did anything...

(Takes parrot out of the cage and thumps its head on the counter. Throws it up in the air and watches it plummet to the floor.)

Mr. Praline: Now that's what I call a dead parrot.

Owner: Yeah! You stunned him, just as he was wakin' up! Norwegian Blues stun easily, major.

Mr. Praline: Um...now look...now look, mate, I've definitely 'ad enough of this. That parrot is definitely deceased, and when I purchased it not 'alf an hour ago, you assured me that its total lack of movement was due to it bein' tired and shagged out following a prolonged squawk.

Mr. Praline: Look, I took the liberty of examining that parrot when I got it home, and I discovered the only reason that it had been sitting on its perch in the first place was that it had been NAILED there.

Owner: Well, o'course it was nailed there! If I hadn't nailed that bird down, it would have nuzzled up to those bars, bent 'em apart with its beak, and VOOM! Feeweeweewee! 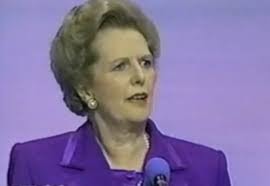 Fast forward 21 years to 1990. Margaret Thatcher is Prime Minister (her last year of office as PM) and she is addressing the Conservative Party Conference.

One of her targets was the new logo of the Liberal Democratic Party, adopted in 1989. The logo of a yellow bird in full flight is called the Bird of Liberty:

See Margaret Thatcher’s comments by clicking on the following link, well worth the look:
http://www.youtube.com/watch?v=DQ6TgaPJcR0

For those not inclined to view, the text is as follows:

“..Now, that brings me to the Liberal Party.
I gather that during the last few days there have been some ill-natured jokes about their new symbol, a bird of some kind, adopted by the Liberal Democrats at Blackpool.
Politics is a serious business, and one should not lower the tone unduly. So I will say only this of the Liberal Democrat symbol and of the party it symbolises.
This is an ex-parrot.
It is not merely stunned. It has ceased to be, expired and gone to meet its maker. It is a parrot no more. It has rung down the curtain and joined the choir invisible. This is a late parrot.
And now for something completely different…”
By the Way Moment:

Margaret Thatcher had to be persuaded by her advisor to use the reference to the dead parrot, that the lines were funny and that they would be recognised by the audience.

She famously pondered it for a long time backstage and was shown the parrot sketch, repeatedly, until she could mimic John Cleese perfectly.

Still undecided, she asked her advisor: “This Monty Python. Is he one of us?”