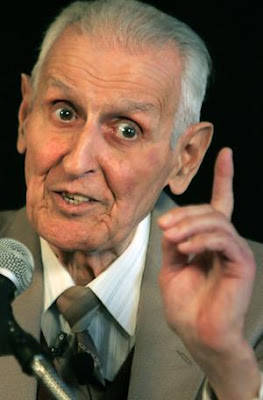 Dr Death Dies
Jack Kevorkian, the man known as 'Dr Death' for helping more than 100 people end their lives through assisted suicide, died early on Friday after a short illness.
-        News Report, Sydney Morning Herald, 4 June 2011
The above announcement and a recollection of some earlier reading about  Jack Kevorkian raised a conundrum in my mind, which I will come to later.
Jacob “Jack” Kevorkian (1928 – 2011) was born in the US of Armenian parents.  He became a doctor in 1952 and became a physician consultant in death counseling in 1987.  From 1990 he became involved in public assisted suicides and he was tried a number of times for murder.  Convictions were not secured in that Kevorkian, who maintained that “dying is not a crime”, did not actually cause the death.  Instead, he provided  patients a means of suicide - a machine he called a Thanatron (death machine) and another called a Mercitron (mercy machine) – which delivered fatal doses of drugs when activated by the patient. 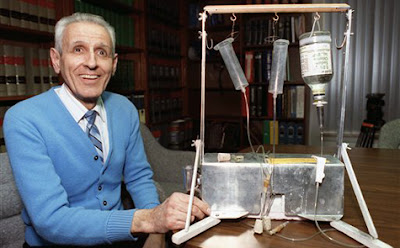 This was controversial, especially in that there were reports that more than half of the patients who had committed suicide were not terminally ill, that there was inadequate counseling and consideration of alternatives, that there was inadequate referral to pain specialists and that ins some cases medical records were incomplete.  Kevorkian denied allegations of inadequate consideration, counseling and treatment, and of hasty termination.  In response to the assertion that not all the suicides were terminally ill, he responded "What difference does it make if someone is terminal? We are all terminal.”  His view was that a patient could be assisted with suicide not if they were terminally ill but that they were suffering, saying that he rejected 4 out of every 5 requests.
In 1998 Kevorkian departed from his past practice.  Instead of providing the means of suicide, he gave Thomas Youk, 52, a lethal injection.  Youk was in the final stages of Lou Gehrig’s Disease, a fatal degenerative motor neuron disease.  A tape of Kevorkian giving the injection was broadcast on Sixty Minutes .  On the tape, Kevorkian dared the authorities to try to convict him or stop him from carrying out mercy killings.
Kevorkian had already lost his licence to practice medicine in 1991.  In 1999 he was charged with second degree murder and the delivery of a controlled substance, the lethal injection, the controlled substance being unlawful for him to have and use without a medical licence.  He was convicted and sentenced to serve 10–25 years in prison, the Judge Jessica Cooper saying:
"You were on bond to another judge when you committed this offence, you were not licensed to practice medicine when you committed this offence and you hadn't been licensed for eight years. And you had the audacity to go on national television, show the world what you did and dare the legal system to stop you. Well, sir, consider yourself stopped."
Kevorkian was repeatedly refused parole until, having spent more than 8 years in jail, he was paroled in 2007 on condition that he would not offer suicide advice to anyone, would not help anyone else die and would not provide care for anyone older than 62 or disabled.  On his release he lectured on not only euthanasia but also on tyranny, politics and the criminal justice system.  A 2010 telemovie, You Don’t Know Jack, earned Al Pacino an Emmy and a Golden Globe for portraying him.
Kevorkian died of liver cancer.  According to his attorney, there were no artificial attempts to keep him alive and he died without pain.  He was 83.
Now here is where it gets a bit complicated.
At the trial that sent him to prison, Judge Jessica Cooper said:
"Well, we are a nation of laws, and we are a nation that tolerates differences of opinion because we have a civilized and a nonviolent way of resolving our conflicts that weighs the law and adheres to the law. We have the means and the methods to protest the laws with which we disagree. You can criticize the law, you can write or lecture about the law, you can speak to the media or petition the voters. But you must always stay within the limits provided by the law. You may not break the law. You may not take the law into your own hands. . .
This trial was not about the political or moral correctness of euthanasia. It was all about you, sir. It was about lawlessness. It was about disrespect for a society that exists and flourishes because of the strength of the legal system.
No one, sir, is above the law. No one."
In contrast, Judge Thomas Jackson, who presided over Kevorkian’s first murder trial in 1994, stated on Kevorkian’s death that the 1994 case had  been  “under a badly written law aimed at him. . . .  I tried to give him the best trial possible, I want to express sorrow at his passing.”
In 1945-1946, the Allies brought various members of the political, military an economic leadership of Nazi Germany to trial as war criminals.  In  so doing, the International Law Commission of the United nations formulated a set of principles, known as the Nuremburg Principles (the trials being held in Nuremburg) as the guidelines underlying the trials.  Many of the principles deal with breaches of international law.
Principle IV states that "The fact that a person acted pursuant to order of his Government or of a superior does not relieve him from responsibility under international law, provided a moral choice was in fact possible to him".  This principle has been paraphrased as "It is not an acceptable excuse to say 'I was just following my superior's orders'" and has been variously dubbed as the Nuremburg Defence,  Superior Orders and Lawful Orders.
The Nuremburg Defence was not accepted as a defence at the military trials.  In legal parlance, it was not a defence but was a matter in mitigation, that is, to lessen punishment.
Since Nuremburg, however, the Nuremburg Defence has been accepted in some cases, rejected in others.
There may be principles of international law and constitutional law that apply, but I am not an international or constitutional lawyer.
My conundra (?) are as follows:
How does an individual determine what is, and what is not a bad law?
What if a majority of people feel it is not a bad law, does that mean the individual should follow it?
History shows that laws change.  At one time witches were burned at the stake.  Will we in future allow euthanasia?  Was Jack Kevorkian wrong to follow what he believed to be right?
Don’t look to me for the answers, as I said, I am puzzled.