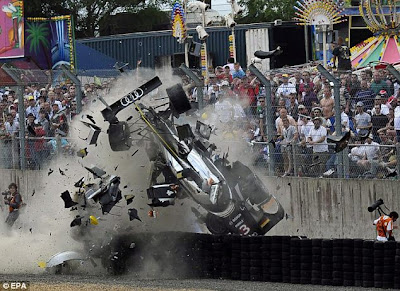 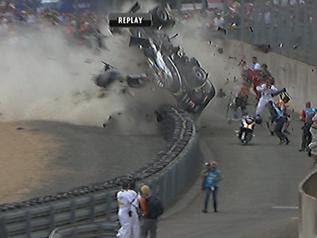 Scottish racing driver Allan McNish and nearby photographers were lucky to escape death when his car crashed into a barrier at the LeMans 24 hour race. McNish’s Audi R18 collided with a slower Ferrari GT, driven by Frenchman Anthony Beltoise, careered across a gravel trap and smashed into the barrier.  Mcnish, a two time winner of the race, crashed in the first hour.
-        News report
See the crash at:
http://www.youtube.com/watch?v=7-cv0Izr11s
Anyone who watched the news on this Queen’s Birthday long weekend would have seen film of the above accident and, like me,  wondered how it was that some of the nearby photographers escaped injury.

It brought to mind an accident at the Le Mans 24 hour race some 56 years earlier, in 1955, when a driver and spectators were not so lucky.  It remains the worst accident in racing history in terms of fatalities.
The race:


The 24 Hours of Le Mans endurance race is the world’s oldest sports car race in endurance racing, held annually since 1923.  Race teams and drivers have to balance speed against mechanical performance and have to safeguard against mechanical breakdown.  Drivers rotate and spend up to 2 hours at the wheel.  It is compulsory today that at least 3 drivers share the driving.
In 1955 the Le Mans circuit remained largely unaltered from that at inception in 1923.  At that time top speeds were about 100kph; by 1955 they were in excess of 300kph.  Safety features, such as seatbelts, commonplace today, were lacking in 1955.  Drivers preferred to be thrown clear of a burning wreck than to be trapped in it.
The popularity of the race is illustrated by the fact that the 1955 race had 250,000 spectators present.
The driver: 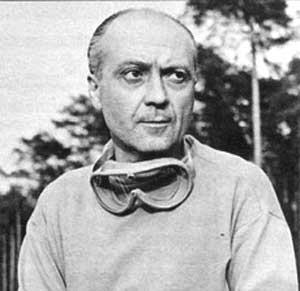 Pierre Levegh , 49, had driven for a straight 23 hours in the 1952 Le Mans, even though he had a relief driver, and was known for his determination.  He had been engaged by Mercedes Benz in 1955.
The car:
1955 saw many of the leading manufacturers competing in various racing events as PR exercises, including Jaguar, Aston Martin and Maserati.  Mercedes-Benz was no exception and that year had debuted a 300 SLR sports car with a body of an extremely light magnesium alloy called Elektron, thereby enabling faster speed and increased performance. 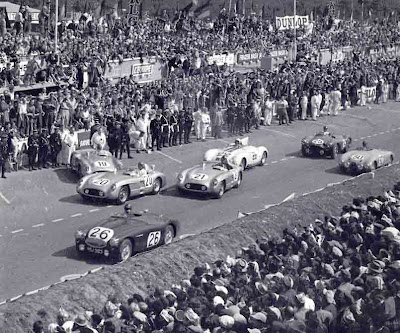 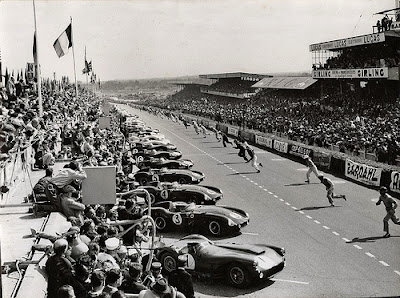 The start of the 1955 race.
The Le Mans was traditionally started by drivers running to their cars from the opposite side of the track as soon as the French flag was waved. 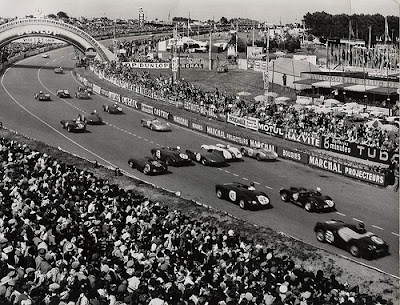 Another view of the beginning of the race
The accident:
The race was extremely fast with records being broken at nearly every lap.
As the race entered its third hour, Jaguar driver Mike Hawthorn overtook the slower Austin-Healey 100 of Lance Macklin.  He then belatedly noticed that his pit crew had signalled him to come in for petrol, causing him to brake.  Hawthorn’s vehicle was fitted with the newer disc brakes and was able to stop more quickly than the vehicles behind him, which were still using the conventional drum brake system.  Macklin in the Austin-Healey that had been overtaken applied his own brakes but could not slow as fast as Hawthorn.  He swerved to avoid Hawthorn.
Driving behind Macklin were Levegh in the Mercedes and Juan Fangio in another Mercedes 300 SLR.  Fangio was actually in second place and was trying to lap Levegh. Levegh held up his hand to signal Fangio to slow but he had no opportunity to do so himself.  He collided with the left rear of Macklin’s car at about 250kph.  The rear of the Austin Healey design was akin to a long ramp, designed to take advantage of aerodynamics.  It caused Levegh’s car to become airborne like a rocket, landing on the left hand side earthen embankment that separated the track from the spectators.

Levegh’s vehicle struck the embankment at such speed and at such an angle that it somersaulted for 80 metres.  The following is a diagram prepared for the inquest into the accident: 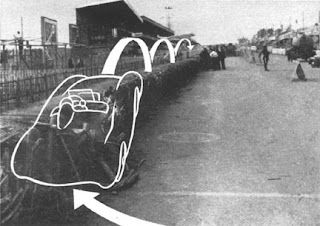 Parts of the car were flung into the crowd as it turned end over end, including the engine and front axle, killing spectators in a swath.   A number of the tightly jammed spectators were decapitated by the flying bonnet.  Levegh was thrown from the vehicle as it was somersaulting, being killed from a crushed skull.

The hood and front axle in the air.
As the somersaulting slowed, the fuel tank of the Mercedes exploded, causing the magnesium body to flare in white-hot flames.  Embers and flames killed more spectators.  Attempts by rescue workers to extinguish the magnesium fire by pouring water onto it only worsened the situation.  The wreck burned for hours. 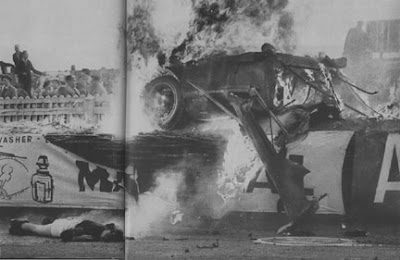 Levegh’s burning Mercedes, the body of a spectator in front. 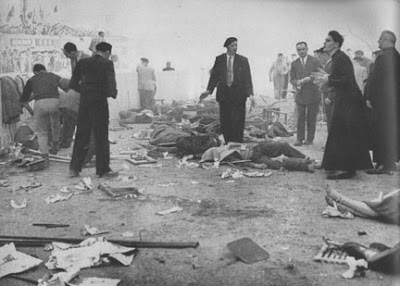 Priests walk among the dead, having given last rites.
Driver Pierre Levegh and 83  spectators died.  Another 120 were injured, many severely.

Film of the accident may be viewed  by clicking on the following link:

Fangio managed to avoid both Levegh’s Mercedes and Macklin’s damaged Austin-Healey.
Macklin skidded across the track to the right, hit the barrier wall and skidded back onto the track, colliding with the barrier on the left hand side of the track near Levegh’s burning Mercedes. In so doing Macklin’s vehicle killed another spectator.  Macklin  survived without serious injury.

As Levegh's hood and axle fall into the crowd, Macklin’s Austin-Healy, with hood open from the impact, skids across the track before killing another spectator.  Fangio’s Mercedes is approaching.
Race results:
Race officials elected to continue the race, the official reason being the need to prevent roads from being clogged and slowing don ambulances.
Mercedes-Benz withdrew its 2 other cars from the race, although not until 8 hours after the accident. It is believed that the company was also concerned at anti-German feeling in France 10 years after the end of WW2.
None of the other participants withdrew.
Mike Hawthorn, whose braking had precipitated the accident, won the race.  Photographs were published in the French press of Hawthorn and his co-driver with the customary champagne but were met with scorn. 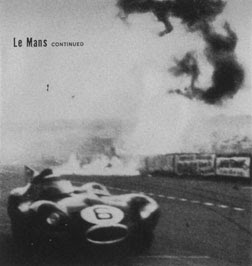