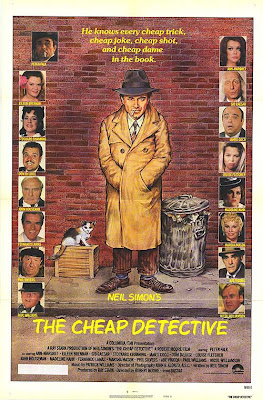 The Cheap Detective (1978)
Comment:
Yesterday I mentioned Neil Simon’s Murder by Death.  That movie was followed up by The Cheap Detective, a very funny detective flick that parodies a selection of Humphrey Bogart movies including The Maltese Falcon, The Big Sleep and Casablanca, as well as Chinatown, To Have and Have Not and a Streetcar Named Desire.  Another movie to beg, borrow or steal, or hire if you can find it, or buy on Amazon.
Synopsis:
Peter Falk plays Lou Peckinpaugh, a detective in the Humphrey Bogart mould who is suspected of murdering his partner at the instigation of his partner’s wife, with whom he was having an affair.  At the same time as he tries to stay ahead of the cops and find out who killed his partner, he meets up with various characters in various situations, including John Houseman as Jasper Blubber, parodying Sydney Greenstreet as Kasper Gutman in The Maltese Falcon.
Quote:
Jasper Blubber:  You drink, of course?
Lou Peckinpaugh:  Why not?
(Blubber calls out to the Asian waiter).
Jasper Blubber: One gin sling!
Lou Peckinpaugh:  I'd rather have a brandy.
Jasper Blubber: Won Jin Sling is the waiter. One brandy, Won Jin Sling.
(The waiter brings the drink).
Lou Peckinpaugh:  This is a gin sling!
Jasper Blubber: It is? I was wrong - the waiter's name is Brandy.
Trivia:
I love the way that the corpses die standing up.