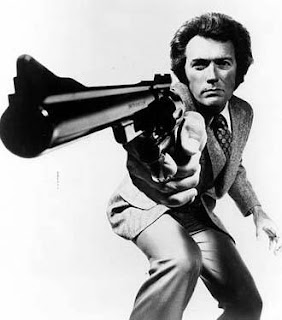 Dirty Harry (1971)
Comment:
Despite its right wing message glorifying police brutality, misogyny, racism and political incorrectness, this remains a rollicking good yarn.  Besides, how can a film series that has contributed so many memorable lines to the English language be all bad?
Synopsis:
Harry is dubbed Dirty Harry because he is given “every dirty job that comes along”.  He is on the trail of a serial killer named Scorpio and in a race against time when Scorpio kidnaps and ransoms a young teenage girl.
Quote:
Harry Callahan:  I know what you're thinking. "Did he fire six shots or only five?" Well, to tell you the truth, in all this excitement I kind of lost track myself. But being as this is a .44 Magnum, the most powerful handgun in the world, and would blow your head clean off, you've got to ask yourself one question: Do I feel lucky? Well, do ya, punk?
Link:
Do I feel lucky? Scene:
http://www.youtube.com/watch?v=u0-oinyjsk0&feature=related
Trivia:
When Universal let go of the script, Warner Bros. purchased it with a view to cast Frank Sinatra. Sinatra was interested, however he had broken his wrist during the filming of The Manchurian Candidate eight years previously, and during contract negotiations, he found the large handgun too unwieldy. Additionally, his father had recently passed away, and Sinatra decided he wanted to do some lighter material. After Sinatra dropped out, Warner Bros. considered Marlon Brando for the role, but never officially approached him. Next, they offered it to Steve McQueen and then Paul Newman, both of whom turned it down. Newman however suggested Clint Eastwood as a possible star.

Posted by BytesMaster at 5:56 AM