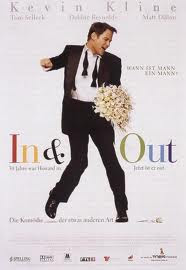 Comment:
Another movie that stands repeated viewings over time, usually a sign that it is more than just a time-filler.  A large well known cast; a well written, funny script and numerous memorable moments make this a film to put on the list to rent from your local video store.  (Am I the only one who still calls them video stores, when they o longer have videos, only Blu-ray and DVD’s?).
Synopsis:
Howard Brackett, the English teacher in a small Indiana high school, is looking forward to his coming wedding to fellow teacher Emily.  When one of his former students wins an Oscar for portraying a gay soldier and thanks Howard for being  his inspirational gay motivator, the media descend.
Quote:
[at the Academy Awards]
Glenn Close (as herself): This is Cameron's first nomination and he's in extremely good company. Tonight he joins fellow best actor nominee Paul Newman for "Coot", Clint Eastwood for "Codger", Michael Douglas for "Primary Urges"
[blows him a kiss]
Glenn Close: and Steven Seagal for "Snowball in Hell".
Trivia:
The film was inspired by Tom Hanks’ outing f tow persons in his tearful speech when he accepted his 1994 Oscar for his role in Philadelphia.  In his speech Hanks mentioned his high-school drama coach Rawley Farnsworth, and his former classmate John Gilkerson, "two of the finest gay Americans, two wonderful men that I had the good fortune to be associated with".

Posted by BytesMaster at 4:37 AM