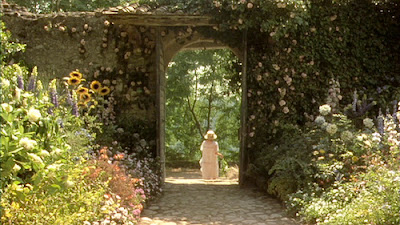 My House in Umbria (2003).
Comment:
Anyone who has been watching the superbly filmed Downton Abbey at one million pounds per episode will have seen Dame Maggie Smith’s portrayal of the Dowager Countess of Grantham, Violet Crawley.  She has played roles as diverse as Minerva McGonogall in Harry Potter, Reverend Mother in Sister Act, Miss Jean Brodie in The Prime of and Desdemona in Othello.  In the pic mentioned not long ago, Murder By Death, she was young and a stunner.  My House in Umbria is one of my wife’s faves and is an enjoyable Maggie Smith vehicle, even if it is a made for TV flick.  The part could have been written for her, it is the type of role she plays so well.  She also received an Emmy for Best TV miniseries/movie for her portrayal.
Synopsis.
Emily Delahunty, an eccentric British author living in Umbria, Italy, takes an assortment of 3 people into her house after they survive a terrorist attack on a train in which they are all passengers.
Quote:
Emily Delahunty: “Sometimes I feel as if we are all in a story that’s being made up as each day passes.”
Links:
The trailer for the film:
http://www.youtube.com/watch?v=kVcdo24gaiE
Dame Maggie Smith commenting on the film:
http://www.youtube.com/watch?v=KGM2cBRZwWQ&feature=related