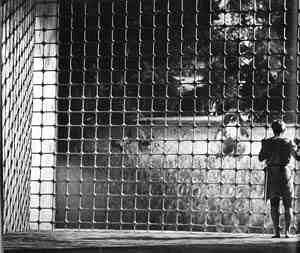 The Incredible Shrinking Man (1957
Comment:
You may need to get this from Amazon but, beyond the crap title and the crap science, this is a good film.  If it feels like an episode from The Twilight Zone, that may be because the story was written by Richard Matheson, who wrote 14 of the TZ episodes, including Nightmare at 20,000 Feet.  He is also the author of I Am Legend, What Dreams May Come and Duel.  Remember also that the movie predates computer-generated imagery.
Synopsis:
The 1950’s saw numerous sci-fi films where genetic mutations, size changes, abnormal characteristics etc were blamed on radioactivity and the effects of nuclear exposure.  This film is no exception.  Robert Carey is exposed to a radioactive cloud at sea and begins shrinking, as you have probably guessed from the title.  As he shrinks further and further, he has to do battle with a cat and then a spider, eventually becoming so small that he can escape what has become a prison by walking through a window mesh.  The implication being that he will shrink to atomic size, there is a final monologue win which he declares that he still matters.
Speech:
[closing soliloquy narration, added by the film’s director Jack Arnold]
Scott Carey: I was continuing to shrink, to become... what? The infinitesimal? What was I? Still a human being? Or was I the man of the future? If there were other bursts of radiation, other clouds drifting across seas and continents, would other beings follow me into this vast new world? So close - the infinitesimal and the infinite. But suddenly, I knew they were really the two ends of the same concept. The unbelievably small and the unbelievably vast eventually meet - like the closing of a gigantic circle. I looked up, as if somehow I would grasp the heavens. The universe, worlds beyond number, God's silver tapestry spread across the night. And in that moment, I knew the answer to the riddle of the infinite. I had thought in terms of man's own limited dimension. I had presumed upon nature. That existence begins and ends in man's conception, not nature's. And I felt my body dwindling, melting, becoming nothing. My fears melted away. And in their place came acceptance. All this vast majesty of creation, it had to mean something. And then I meant something, too. Yes, smaller than the smallest, I meant something, too. To God, there is no zero. I still exist!
Link:
http://www.youtube.com/watch?v=Bp3iHjGBfT4
http://www.videodetective.com/movies/trailers/the-incredible-shrinking-man-trailer/3603
Trivia:
Those who like their sci-fi straight will be disappointed to know that there is a remake in the works for 2012 to star Eddie Murphy, so expect screwball comedy and fart jokes.