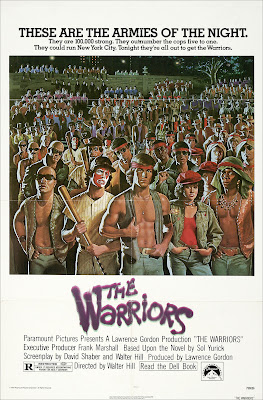 The Warriors (1979)
Comment:
A cult classic that puts the “Behind enemy lines trying to get home” genre in a different setting.  “Waaaaariors, come out to play-aaay . . . “
Synopsis:
Cyrus, the leader of a NY gang called the Gramnercy Riffs, calls a meeting of all NY gangs, each to send 9 unarmed reps with guaranteed safe conduct.  At the meeting, Cyrus is shot and killed, with the Warriors blamed.  The movie follows their attempt to get back to the safety of their home base, Coney Island, whilst pursued by every gang in NY.
Quote:
(To a gang member threatening him with a baseball bat)
Ajax:  I'll shove that bat up your ass and turn you into a popsicle.
Trivia:
The Homicides were a real Coney Island gang, and they didn't approve of fictional gangs wearing colours on their turf. The wardrobe department made sure nobody walked off location wearing The Warriors colours. The actors were safe during the cemetery scene in Brooklyn because of a fence surrounding it. Crew members were sent death threats because local gangs weren't cast. Thousands of dollars worth of equipment wase damaged when one gang tore through the set during a lunch break. The Warriors sign painted on the bath house for one of the photos was painted over a real gang's tag. The gang didn't take lightly to this, so the producers paid them to be in the film.

Posted by BytesMaster at 5:12 AM