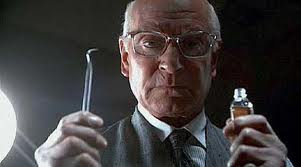 Marathon Man (1976)
Comment:
I have a dentist appointment next week, having broken a tooth on a Tic Tac.  Yes, I know that you are supposed to suck them, not crunch them, but I tend to get impatient with food that lasts a long time.  Tic Tacs, like Minties that rip out fillings, probably generate a lot of dentists’ fees.  I mention this because I have sometimes said to dentists, as they are about to start with their probe, “Yes, it’s safe”, or in a German accent “Is it safe?”  None have ever known what I was talking about.  It comes from this movie (see the clip below).  Sir Laurence Olivier portrays an ex-Nazi, a former dentist, who tortures Dustin Hoffman to find out whether it is safe for him to collect illicit diamonds.  What a superb idea for a torturer, a dentist working on teeth.  Even thinking of it makes me shudder.
Synopsis:
SS dentist Christian Szell, "the White Angel" of Auschwitz, seeks to smuggle priceless diamonds from the United States.  Other people want the diamonds as well.
Quote:
Janeway: In 1945, Szell let it be known around Auschwitz he could provide escape for anybody who could pay the price. He started out with gold naturally, but very quickly worked his way up to diamonds.
Babe: Why did you say "naturally" when you said he started with gold?
Janeway: Szell knocked it out of the Jews' teeth before he burned them. Szell was a dentist.
Link:
The torture scene (not graphic):
http://www.youtube.com/watch?v=dG5Qk-jB0D4
Trivia:
Producer Robert Evans was set upon getting Laurence Olivier to play the part of Szell. However, because Olivier at the time was riddled with cancer, he was uninsurable so Paramount refused to use him. In desperation, Evans called his friends Merle Oberon and David Niven to arrange a meeting with the House of Lords (the upper body of the UK's parliament). There, he urged them to put pressure on Lloyds of London to insure Britain's greatest living actor. The ploy succeeded and a frail Olivier started working on the film. In the end, not only did he net an Oscar nomination for Best Supporting Actor, but his cancer also went into remission. Olivier lived on for another 13 years.

Posted by BytesMaster at 5:24 AM