Aesop's Fables: The Horse and the Ass 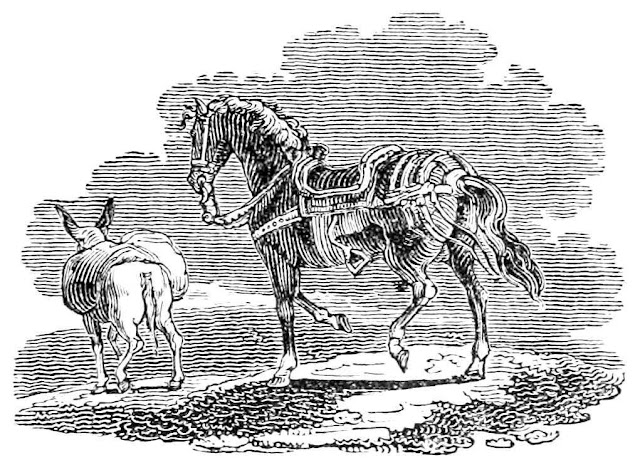 A Horse and an Ass were travelling together, the Horse prancing along in its fine trappings, the Ass carrying with difficulty the heavy weight in its panniers.

"I wish I were you," sighed the Ass; "nothing to do and well fed, and all that fine harness upon you."

Next day, however, there was a great battle, and the Horse was wounded to death in the final charge of the day.

His friend, the Ass, happened to pass by shortly afterwards and found him on the point of death.

"I was wrong," said the Ass: "Better humble security than gilded danger"

Alternative version of the moral:

The folly, and the fate, of pride and arrogance. The mistake of placing happiness in any thing that may be taken away, and the blessing of freedom in a mean estate. 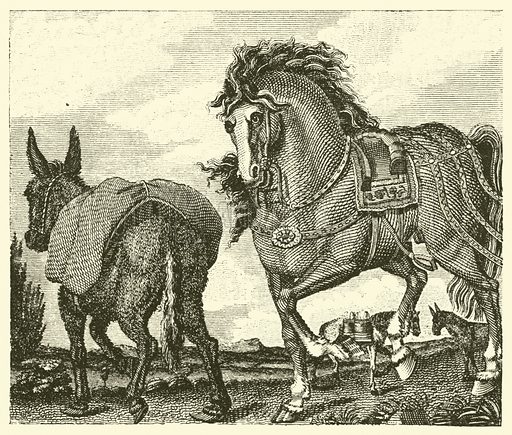 The above also reminds me of a poem previously posted:

When fishes flew and forests walked
And figs grew upon thorn,
Some moment when the moon was blood
Then surely I was born.

With monstrous head and sickening cry
And ears like errant wings,
The devil’s walking parody
On all four-footed things.

The tattered outlaw of the earth,
Of ancient crooked will;
Starve, scourge, deride me: I am dumb,
I keep my secret still.

Fools! For I also had my hour;
One far fierce hour and sweet:
There was a shout about my ears,
And palms before my feet.