Quote(s) for the Day

Byter Steve M sent me an email commenting on the limericks that spoke of a young man from Devizes in England, and mentioned Devizes being near Swindon, from whence he fails.  It reminded me that I had once posted an item about Brit sex symbol Diana Dors and that Steve had written about the time when obtaining her autograph, he asked her for a kiss and she obliged.  Read about it at:
https://bytesdaily.blogspot.com/2017/05/readers-write-and-monday-miscellany_29.html

My reason in mentioning this is that I also happened to see a reference to Swindon that same day when looking up something, what I saw being a quote by Diana Dors.  A sign, I thought, a message that I had to post that as the Quote for the Day, so here it is . . . 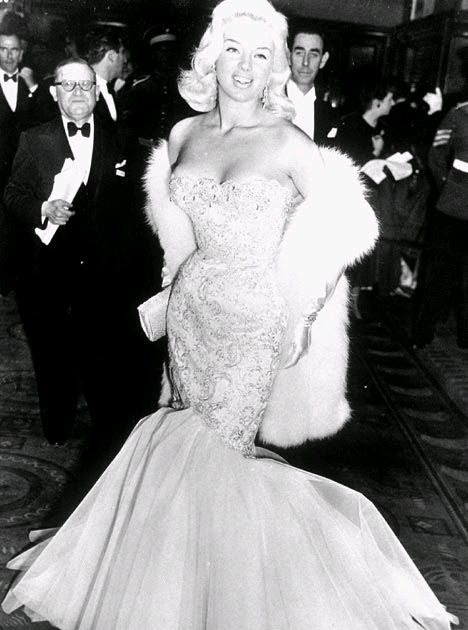 Diana Dors was born Diana Mary Fluck, When signing her first film contract, she changed her contractual surname to Dors, the maiden name of her maternal grandmother; this being at the suggestion of her mother Mary.  Dors later commented:

“They asked me to change my name. I suppose they were afraid that if my real name Diana Fluck was in lights and one of the lights blew ...”

There is also a story, recounted in her autobiography, where she was asked to open a fete in her home town of Swindon. Before proceedings began, she had lunch with the local Vicar who was due to introduce her. During the course of the conversation she revealed her birth name. The Vicar became worried that he would mispronounce her name and cause embarrassment so spent an hour or so fretting and rehearsing what he would say. He then marched out onto the stage and introduced Dors with the immortal words:

‘Ladies and gentlemen, it is with great pleasure that I introduce to you our star guest. We all love her, especially as she is our local girl. I therefore feel it right to introduce her by her real name; Ladies and Gentlemen, please welcome the very lovely Miss Diana Clunt.’

In 1968 she married English actor Alan Lake. He was nine years her junior but the marriage lasted until her untimely death at the age of fifty two. As she grew older, she once asked Alan:

“Will you still love me when I’m old and fat?”

(When Diana died of cancer, five months later Alan took his own life.)

Posted by BytesMaster at 1:14 AM