If you don’t know who Banksy is, you must have in a coma for 30 years or living on Mars. He is the anonymous pommy street artist, activist and film director renowned for his dark and satirical public street art, mostly stencilling. Hi street art is challenging, often confronting, distinctive and makes one think. Some examples: 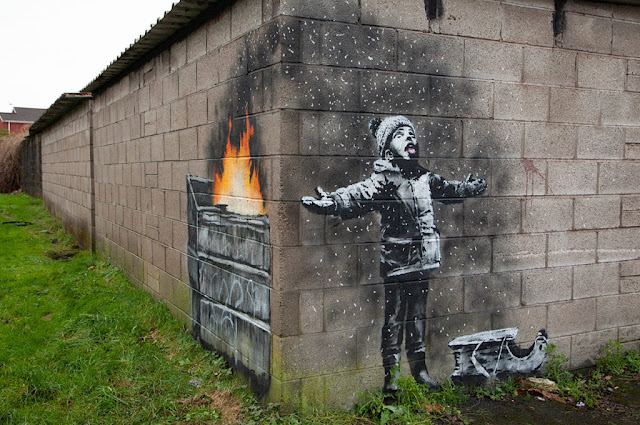 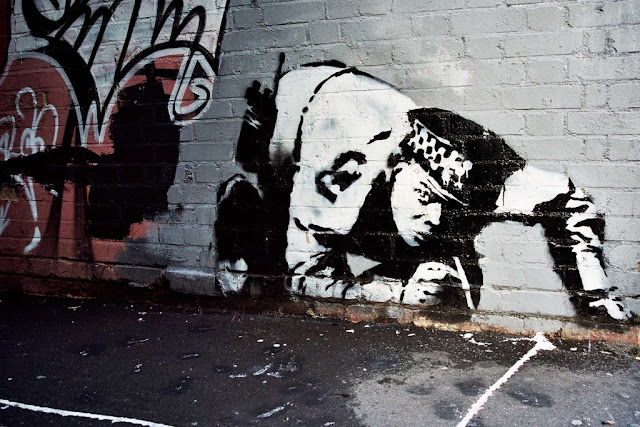 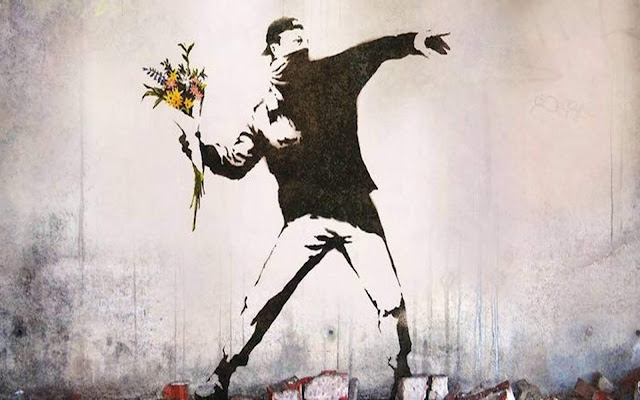 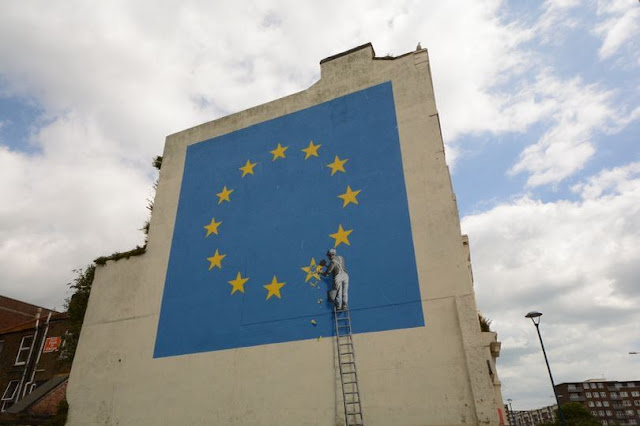 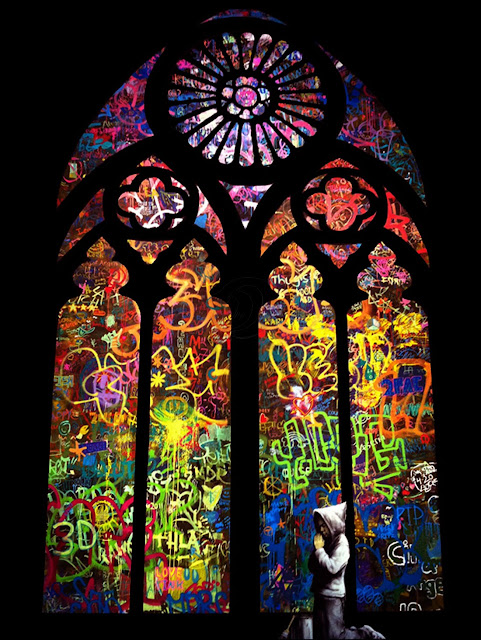 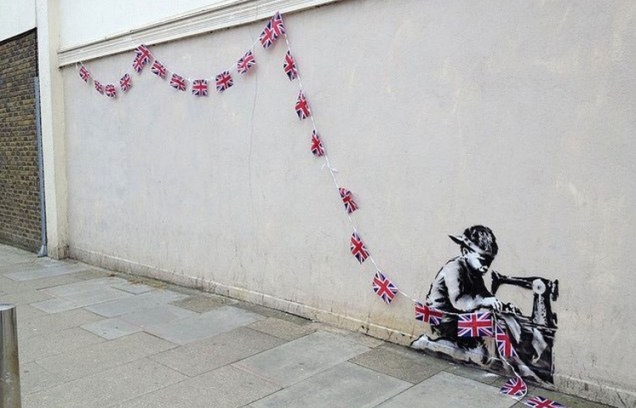 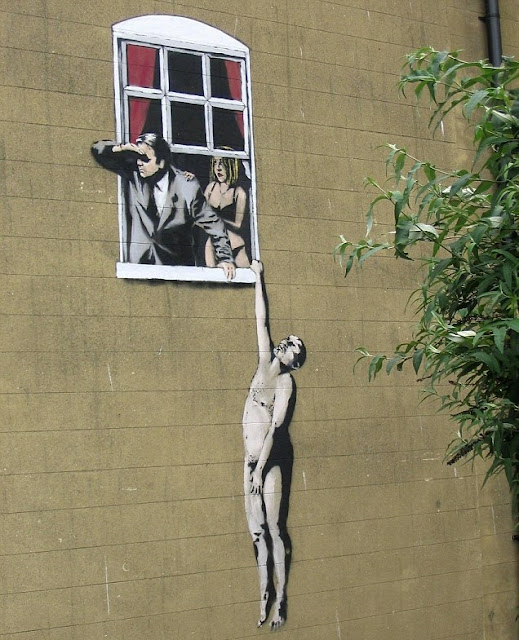 The latest Banksy development is that he has set up an online shop selling products including riot helmets turned into disco balls and the stab-proof vest he designed for Stormzy.

Named Gross Domestic Product, the online shop officially opened on 17 October, just a few weeks after the artist announced the launch of his own merchandise line with a pop-up shop installation in Croydon, UK. Banksy claimed that he was forced to release the branded merchandise following legal action from an unnamed greeting-card company that was trying to "seize legal custody" of his name.

Products on sale range from as little as £10 for an empty spray paint can to £850 for the Union Jack stab-proof vest that British rapper Stormzy wore during his headline set at this year's Glastonbury festival and a non-functional clutch bag made from a brick. A print made in homage to late American artist Jean-Michel Basquiat, a rug designed to look like the corpse of Tony the tiger and a ceiling mounted baby mobile with rows of novelty CCTV cameras attached to it are also on sale. The products each have tongue-in-cheek descriptions. For example the baby mobile is designed to "prepare your little one for the journey ahead – a lifetime of constant scrutiny both state sanctioned and self imposed".

Other products on sale include a clock printed with the trademark Banksy rat, and a tombstone made from a 230kg slab of Portland stone for "the person who has everything". The artist has also commercialised his well-known Girl with Balloon painting that was sent through a shredder at the moment of its auction sale last year, by making it into a tshirt with "fringing" as its bottom half. Other clothing items on sale include t-shirts taken from charity shops that have been vandalised by the artist with his own name printed in stainer ink, spray paint or oil stick.

Some of Banksy’s online shop items: 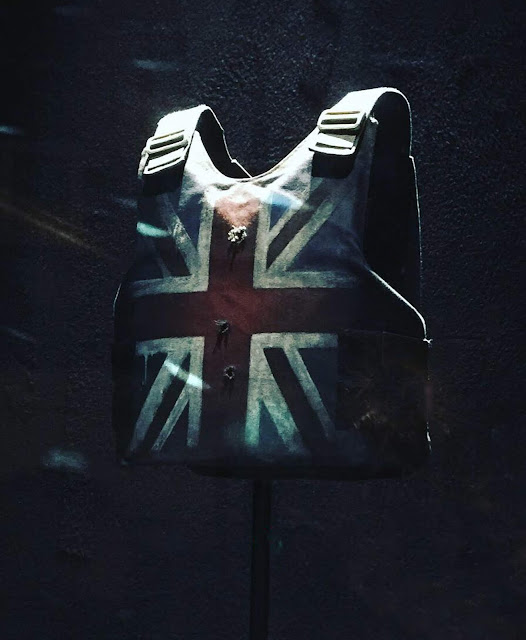 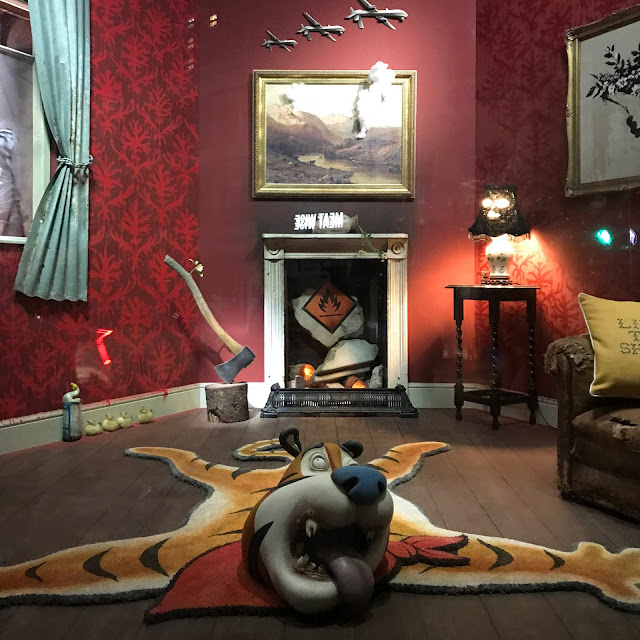 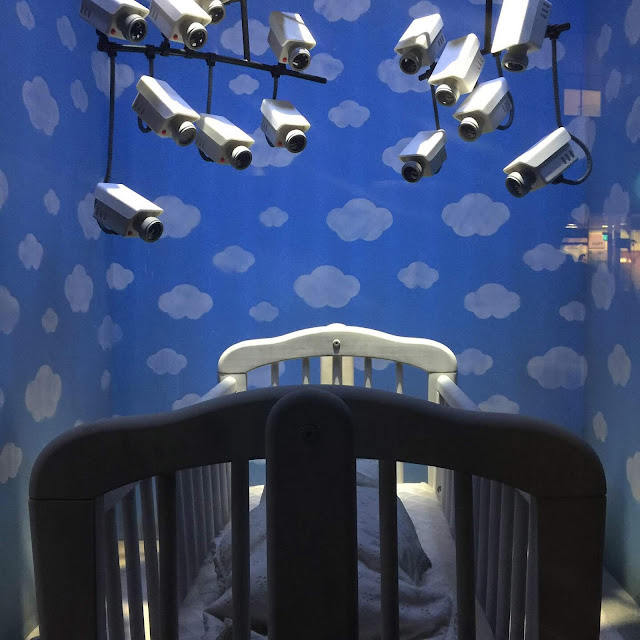 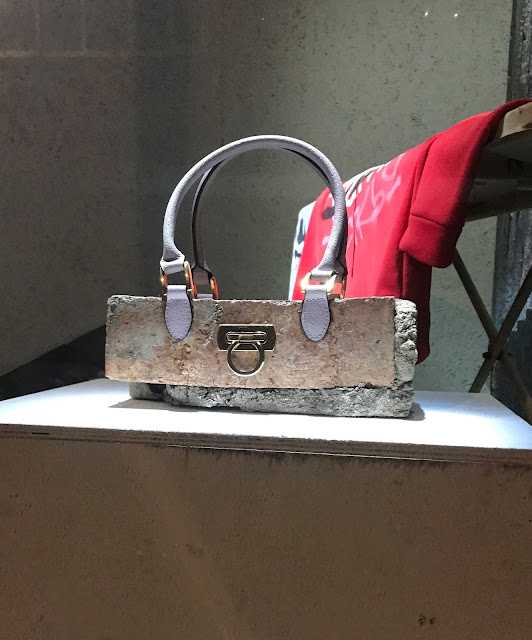 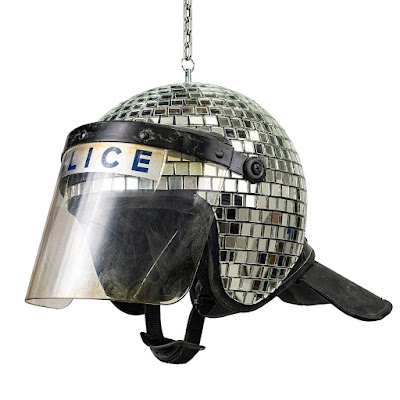 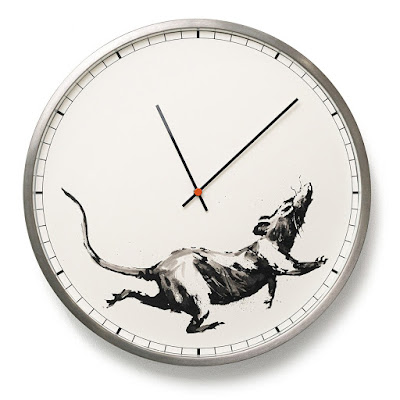 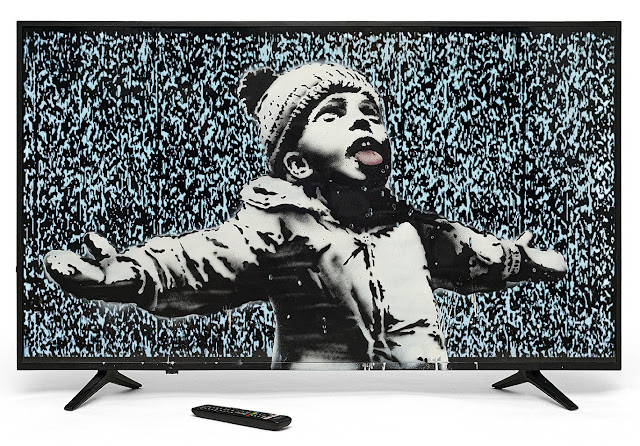 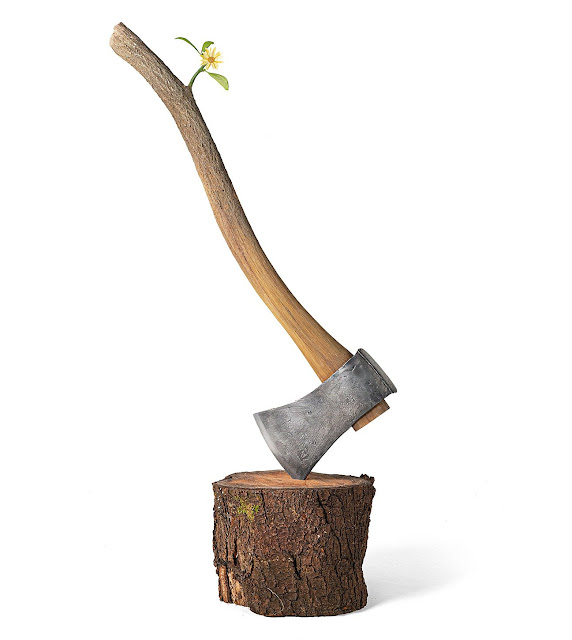 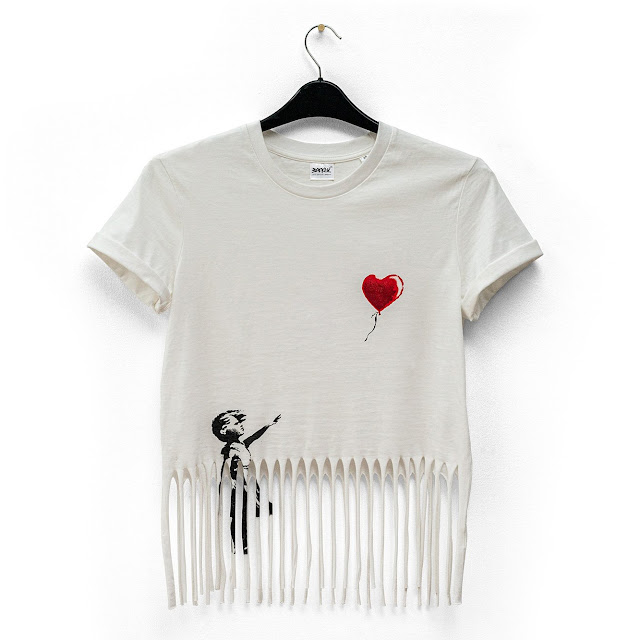 The t shirt references the artwork that was shredded by Banksy from a remote signal after sold at auction: 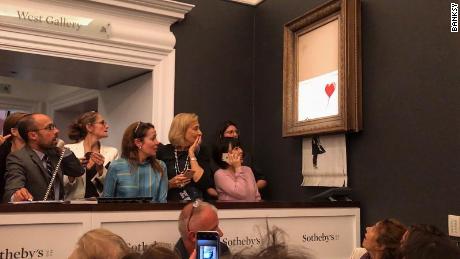 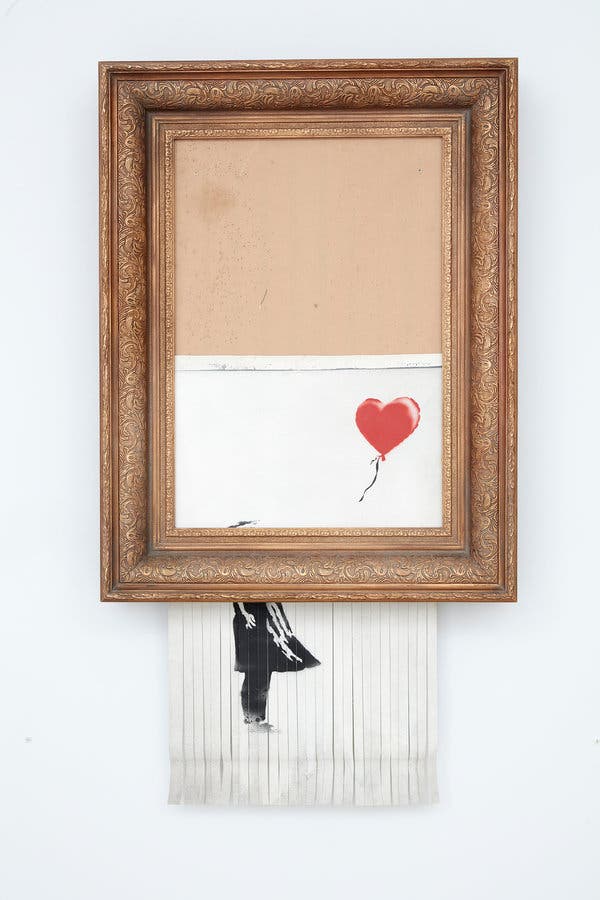 Funnily enough, art experts have opined that the picture shredded is worth far more than unshredded. 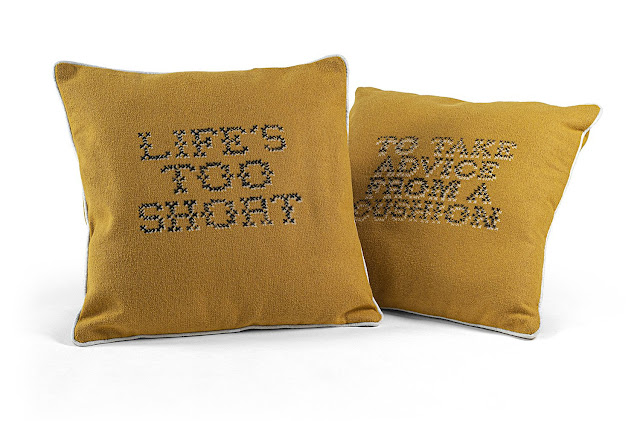 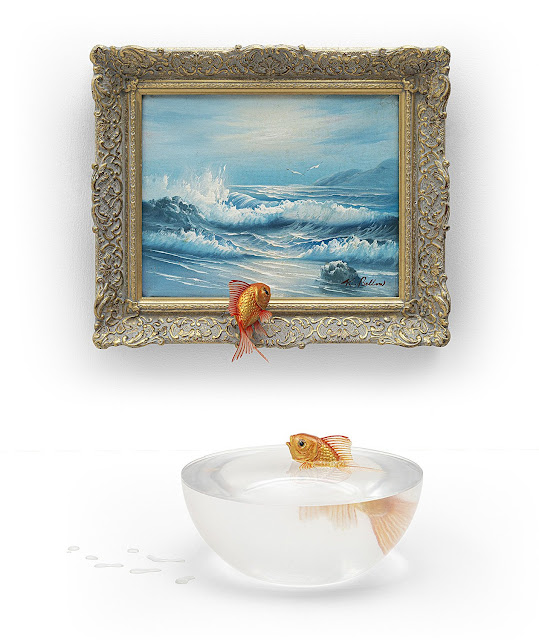 Posted by BytesMaster at 6:49 AM