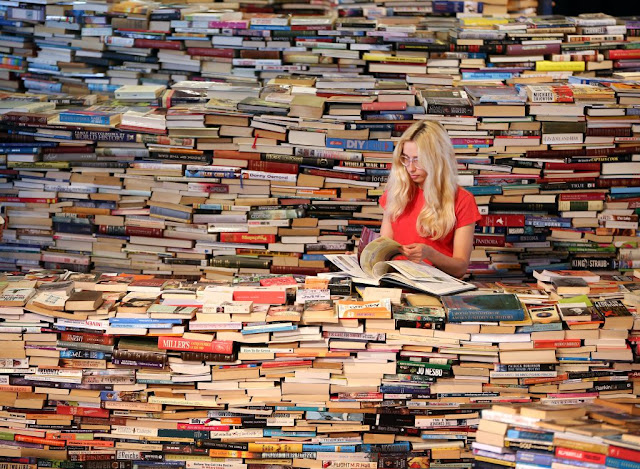 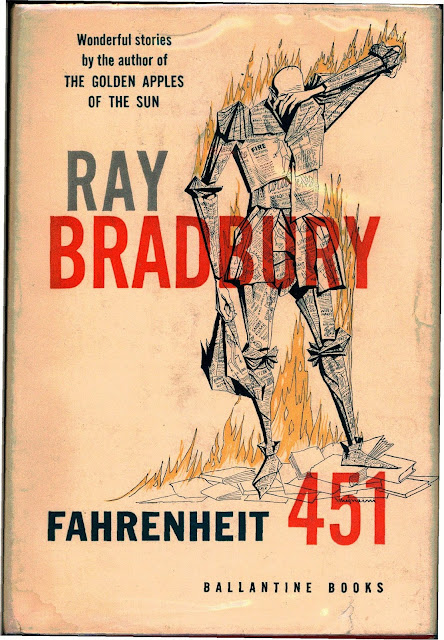 Fahrenheit 451 by Ray Bradbury is a 1953 novel set in a future America where firemen no longer put out fires in that everything is now made so as not to burn.  Instead, the role of firemen is to burn books, which have been declared illegal by the State.  Information is provided by the State via films and television.  The chief character, Montag, a fireman, starts questioning his society and the censorship he is required to carry out.  Those who resist are killed.   He secretly begins keeping and reading some of the books he is required to burn, eventually being detected and making an escape into the country.  Here he meets up with exiles who have each memorized literary works for the day that society begins again.  Montag’s memory piece is the book of Ecclesiastes from the Bible.  Shortly after bombers fly overhead, a war having started, and the city is obliterated by nuclear weapons.  The rebuilding of society can begin.

In a 1956 radio interview, Bradbury said that he wrote Fahrenheit 451 because of his concerns at the time (during the McCarthy era) about the threat of book burning in the United States. In later years he said that the real messages of Fahrenheit 451 were about the dangers of an illiterate society infatuated with mass media, how mass media reduces interest in reading literature.

The title page of the book states the meaning of the title:  “Fahrenheit 451—The temperature at which book paper catches fire and burns....”  The original title of the book was The Fireman but both Bradbury and his publishers thought that was too boring.  They called a local fire station and asked at what temperature paper burned. The firemen put Bradbury on hold while they burned a book, then reported back the temperature as 451 degrees Fahrenheit.  Studies have since shown that ignition temperature varies between 424 and 475 °F (218 and 246 °C), depending on the type of paper.

Over the years various school boards, schools and Christian organisations have banned, or sought to ban the book because of “vulgar”” words and because the firemen burn The Bible. 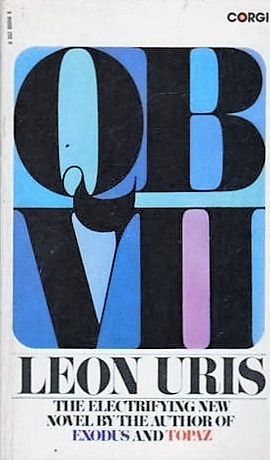 QBVII is a novel by Leon Uris.  In the book a famous author, Abraham Cady, stands trial for libel. In his book The Holocaust, he named eminent surgeon Sir Adam Kelno as one of the Jadwiga concentration camp's most sadistic inmate/doctors. Cady wrote the book after discovering the Jadwiga concentration camp was the site of his family's extermination.  Kelno has denied his involvement in sadistic practices, and asserts he worked hard to save prisoners, at great personal risk. Furious at his depiction by Cady, Kelno brings libel suit against him.  In the end, Kelno wins his case but is awarded one half-penny, the smallest coin of the realm, because his past actions were found to have been so bad that the minor inaccuracies in the book could not have damaged his reputation further.

QB VII is based on a court case for defamation (Dering v Uris) that arose from Uris's earlier best-selling novel Exodus and which led to him being sued.

Dering v Uris and Others was a 1964 English libel suit brought by Polish-born Dr Wladislaw Dering against the American writer Leon Uris. It was described as the first war crimes trial held in Britain at the time.Dering alleged that Uris had libelled him in a footnote in his novel Exodus, which described his participation in medical experiments in Auschwitz concentration camp during the Holocaust:Here in Block X Dr. Wirths used women as guinea pigs and Dr. Schumann sterilized by castration and X-ray and Clauberg removed ovaries and Dr. Dehring performed 17,000 'experiments' in surgery without anaesthetics.The case was tried in the High Court of Justice before Mr Justice Lawton and a jury between April and May 1964. On 6 May, the jury returned a verdict for Dering, but awarded him contemptuous damages of one halfpenny, the smallest coin in the currency. Since publisher Kimber and author Uris had paid a marginally larger token sum of £2 into court, Dering was liable for all the legal costs amounting to £25,000 from that point, due to court rules. Dering died, however, leaving Kimber having to carry the defence’s heavy legal costs.The trial attracted wide media coverage. In particular, The Times provided extensive coverage of the case, printing large portions of the testimony presented in court. The novel QB VII and its 1974 miniseries adaptation are loosely based on this case.

Author Stephen King’s addictions to alcohol and drugs in the 1980s were so serious that King’s family and friends staged an intervention, dumping on the rug in front of him evidence of his addictions taken from his office including beer cans, cigarette butts, grams of cocaine, Xanax, Valium, NyQuil, dextromethorphan (cough medicine) and marijuana.  As King related in his memoir, he then sought help, quit all drugs (including alcohol) in the late 1980s, and has remained sober since.

The most expensive book ever purchased was ‘Codex Leicester’, one of Leonardo Di Vinci’s scientific journals, bought by Bill Gates for $30.8 million at Christie’s auction house New York on 11 November 1994.  That figure is equivalent to $53,222,898.79 in 2019.

In September, 2017, the Church of Jesus Christ of Latter-day Saints purchased the printer’s manuscript of The Book of Mormon. The book is a handwritten copy of the original dictated manuscript, and reportedly sold for a record-setting $35 million.

Victor Hugo’s novel, Les Miserables, has a sentence that is 823 words long. No wonder that I have never been able to get past the first 20 pages.

J K Rowlings’s real name is Joanne Rowling.  Her publishers assumed that schoolboys would not be interested in reading a book by a woman so they asked her to use an initial and to add another.  She chose “K” after her grandmother Kathleen.

Rowling progressed from living on benefits to being the world's first billionaire author. She lost her billionaire status after giving away much of her earnings to charity but remains one of the wealthiest people in the world.

In the 1798 poem by Samuel Taylor Coleridge, The Rime of The Ancient Mariner, the mariner shoots an albatross with his cross bow.  The rest of the ship’s crew feel that he cursed the ship in so doing when the ship is becalmed, so that they hang the albatross about his neck:

Ah! Well a-day! What evil looks
Had I from old and young!
Instead of the cross, the albatross
About my neck was hung. 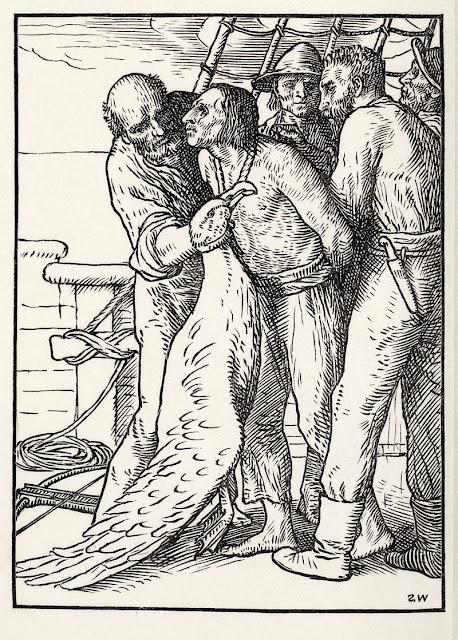 Frontispiece by William Strang for a edition Coleridge's poem. 1903. 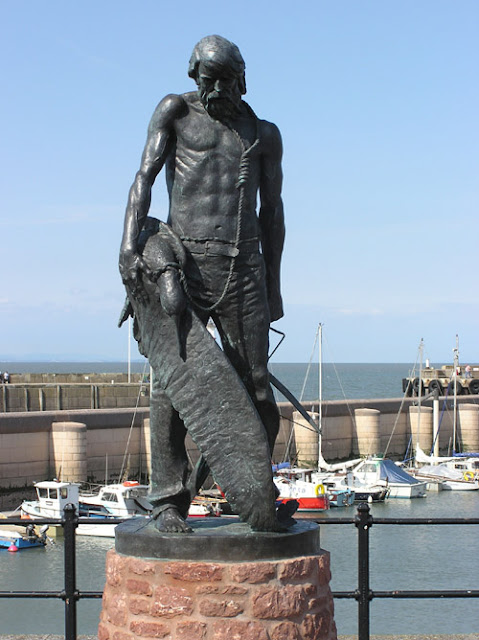 Commemorative statue at Watchet, Somerset: the albatross hangs on a rope looped around the ancient mariner's neck. 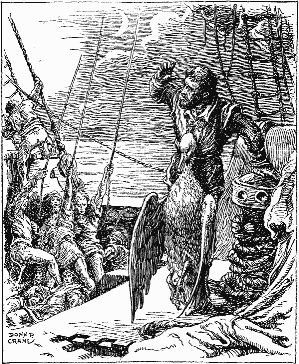 The incident in the poem has given rise to the expression of a heavy, continuing burden being an albatross around one’s neck.

Posted by BytesMaster at 5:49 AM