Two attempts were made throughout the nineteenth century to design a national flag. The first attempt was the National Colonial Flag created in 1823–1824 by Captains John Nicholson and John Bingle. 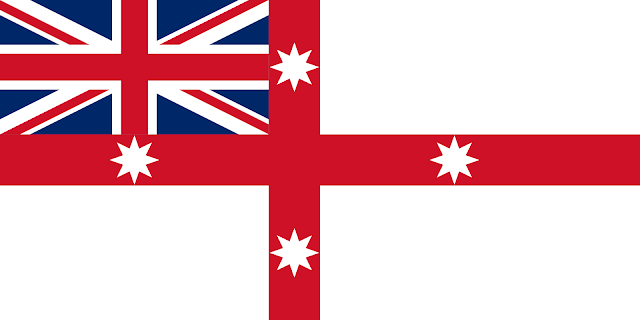 The most popular "national" flag of the period was the 1831 Federation Flag, also designed by Nicholson. This flag was the same at the National Colonial Flag, except that the cross was blue instead of resembling that of St. George. Although the flag was designed by Nicholson in 1831, it did not become widely popular until the latter part of the century, when calls for federation began to grow louder. 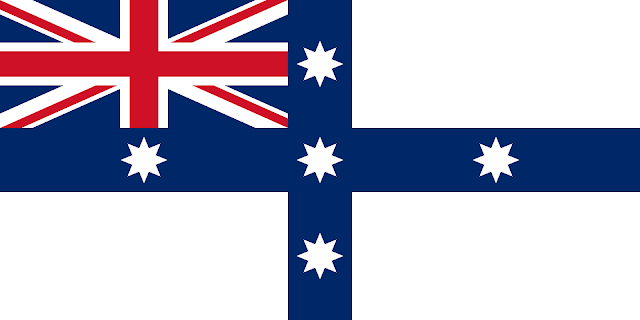 These flags, and many others such as the Eureka Flag (which came into use at the Eureka Stockade in 1854), featured stars representing the Southern Cross. 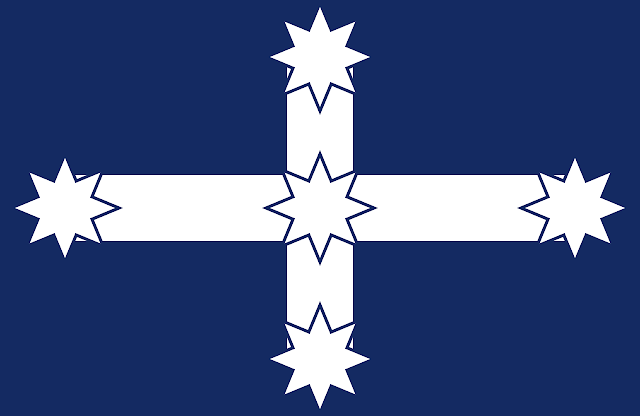 I have previously posted about the Eureka Stockade and its flag, a post worth visiting. Click on:
http://bytesdaily.blogspot.com/2011/01/eureka-stockade-and-its-flag.html#more

Btw, our trivia team is named Eureka after that event and our baseball caps carry the Eureka Stockade flag emblem.

The Eureka Flag is often viewed as the first "Australian" flag as it was the first notable example of a design that had the Southern Cross while excluding the Union Jack.
______________

The oldest known flag to show the stars arranged as they are seen in the sky is the Anti-Transportation League Flag, which is similar in design to the present National Flag. The differences were that there was no Commonwealth /Federation Star and the components of the Southern Cross are depicted with eight points and in gold. 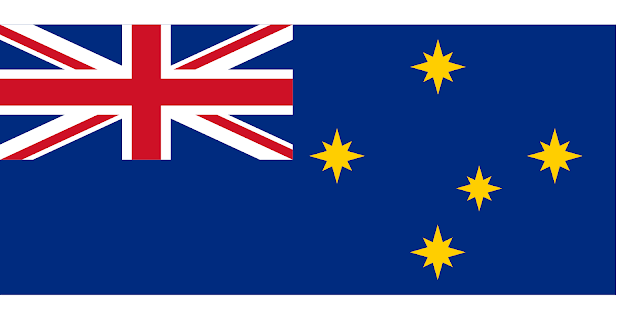 This flag was only briefly in use as two years after the formation of the Anti-Transportation League in 1851, the colonial authorities decided to stop the intake of convicts, so the ATL ceased its activities.
______________

The Murray River Flag, popular since the 1850s, is still widely used by boats that traverse Australia's main waterway. The four alternating blue and white stripes represented the four major rivers that run into the Murray River. 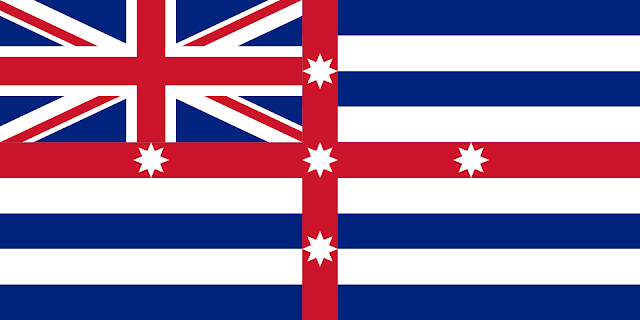 After Federation on 1 January 1901 and following receipt of a request from the British government to design a new flag, the new Commonwealth Government held an official competition for a new federal flag, with a £200 prize. The designs were judged on seven criteria:
- loyalty to the Empire,
- Federation
- History
- Heraldry
- Distinctiveness
- utility and
- cost of manufacture.

Of the 32,823 entries, the majority included the Union Jack and the Southern Cross. Many featured "every kind of flora and fauna identifiable with Australia – sometimes all at once". The kangaroo was particularly popular, seen in thousands of designs – including this noisy contender, which depicted "a winged cricket ball with a jolly-looking kangaroo on it, and two emus running down the pitch": 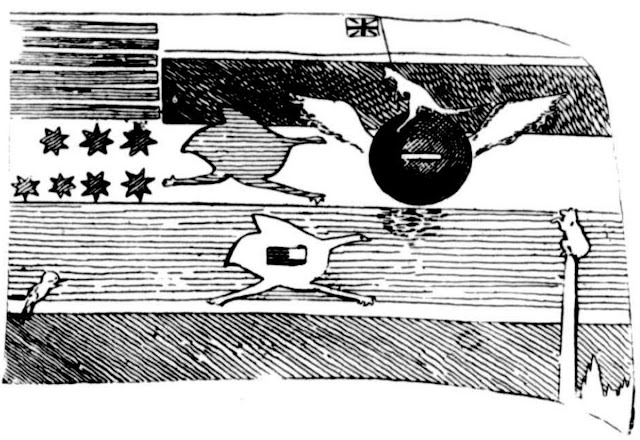 Five almost identical entries were chosen as the winning design, and the designers shared the £200 prize money. They were a fourteen-year-old schoolboy from Melbourne; a teenager apprenticed to an optician from Sydney; an architect from Melbourne; an artist from Perth; and a ship's officer from Auckland, New Zealand. 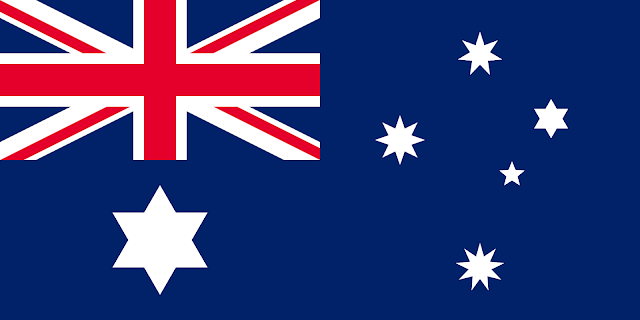 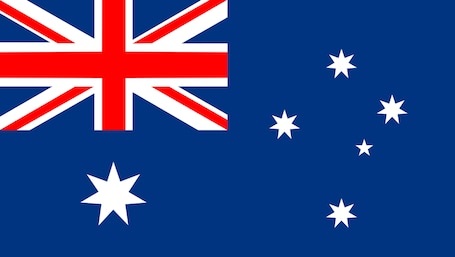 The flag's initial reception was mixed.

The Bulletin, staunchly pro-Republican (aa dish of warmed-up food left over from a previous meal.

yay for the Bulletin) called it:

a staled réchauffé of the British flag, with no artistic virtue, no national significance... Minds move slowly: and Australia is still Britain's little boy. What more natural than that he should accept his father's cut-down garments, – lacking the power to protest, and only dimly realising his will. That bastard flag is a true symbol of the bastard state of Australian opinion.

Btw, a rechauffe is a a dish of warmed-up food left over from a previous meal.

As the design was basically the Victorian flag with a star added, many critics in both the Federal Government and the New South Wales government objected to the chosen flag for being "too Victorian". 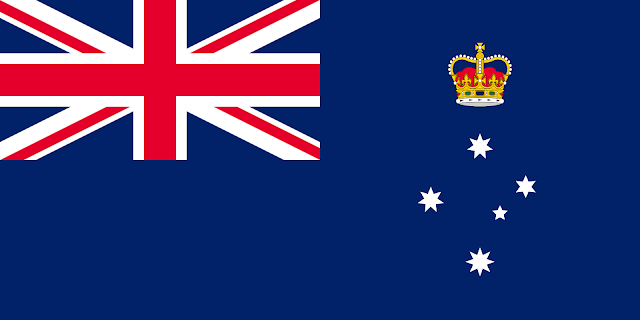 The competition-winning designs were submitted to the British Colonial Secretary in 1902. Prime Minister Edmund Barton announced in the Commonwealth Gazette that King Edward VII had officially approved the design as the flag of Australia on 11 February 1903. 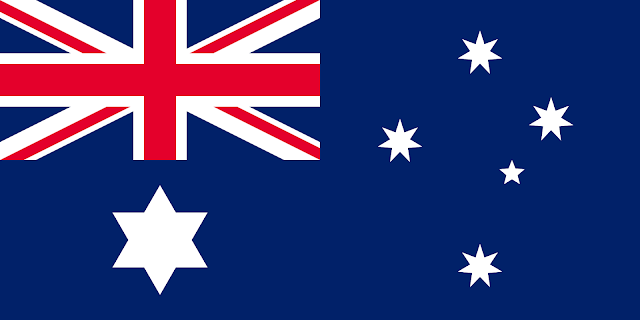 The flag as approved by Edward VII

The approved version made all the stars in the Southern Cross seven-pointed apart from the smallest, and is the same as the current design except the six-pointed Commonwealth Star.
______________

What I think the Oz flag should be: 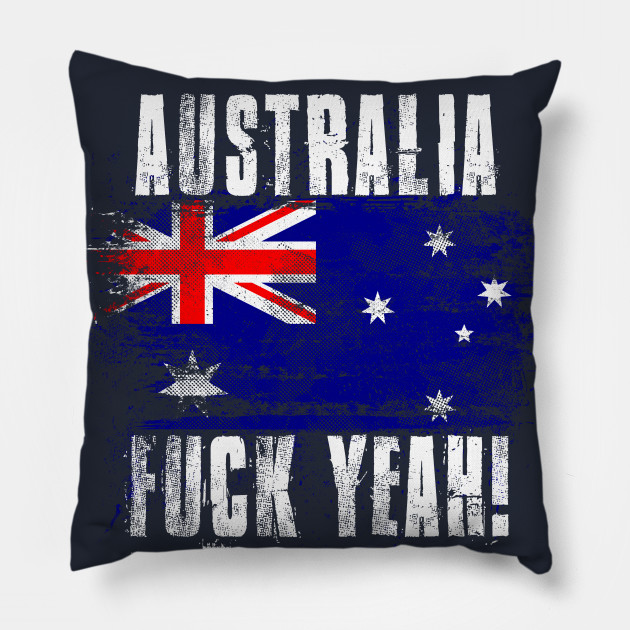 Posted by BytesMaster at 3:11 AM