Readers will note from the above title that this continuing series has been renamed from “Great Replies” to “Replies, Responses and Comebacks”. My reason in doing so is that the term “great” connotes approval whereas some of the replies are cruel (Churchill’s “ugly” response), some are inappropriate and some are historical but not approved. Moreover, responses are not always replies.

I have been reposting the past replies (which reached Number 31) with the intention of completing the series, up to Number 100.

Today, November 11, is significant for a number of events and I therefore propose to note those events through replies. That, however, presents a problem: how to number those items, out of sequence. I have decided to nonetheless number them 32, 33 and 34.

At 5:00am on the morning of November 11 an armistice was signed in a railroad car parked in a French forest near the front lines. The occasion was not a surrender, the armistice being an agreement in which both sides agreed to stop fighting, rather than a surrender. For both sides, an armistice was the fastest way to end the war's misery and carnage, Germany being drained and facing certain defeat, the Allies not wanting the cost in lives and resources of invasion. The terms of the agreement called for the cessation of fighting along the entire Western Front to begin at precisely 11:00am that morning. After over four years of bloody conflict, the Great War was at an end.

Marshall Ferdinand Foch (1851 – 1929), the Supreme Allied Commander during the First World War, primarily wrote the harsh terms imposed on Germany and oversaw the armistice of 11 November.1918. 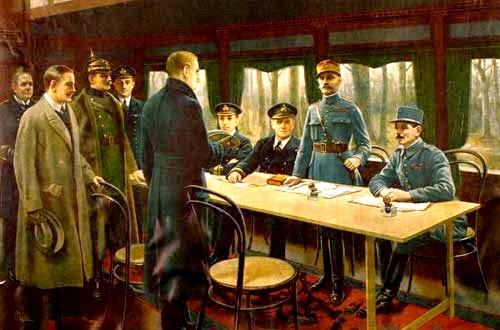 Painting depicting the signing of the armistice, Marshall Ferdinand Foch standing behind the table. 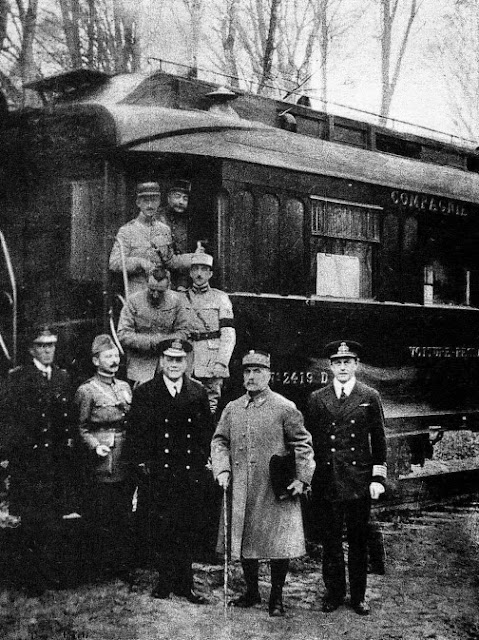 The allied representatives at the signing of the armistice. Ferdinand Foch is second from the right, pictured outside the railway carriage in which it was signed in the forest at Compiegne.

On 22 June 1940 France surrendered to Germany after German blitzkrieg and occupation, which began on 10 May 1940.

Hitler demanded that the signing of the surrender take place in the same railway carriage as had been used for the signing of the 1918 armistice, a carriage that had for 22 years been a monument to the defeat of Germany. The signing was attended, for Germany, by Hitler, Hermann Goring, Wilhelm Keitel, Joachim von Ribbentrop and others.

Hitler sat in the same chair that had been occupied by Marshall Foch in 1918, listened to the preamble of the armistice read out and then disdainfully walked out of the carriage, leaving it to subordinates to accept the surrender. The last sentence of the preamble read “Germany does not have the intention to use the armistice conditions and armistice negotiations as a form of humiliation against such a valiant opponent." 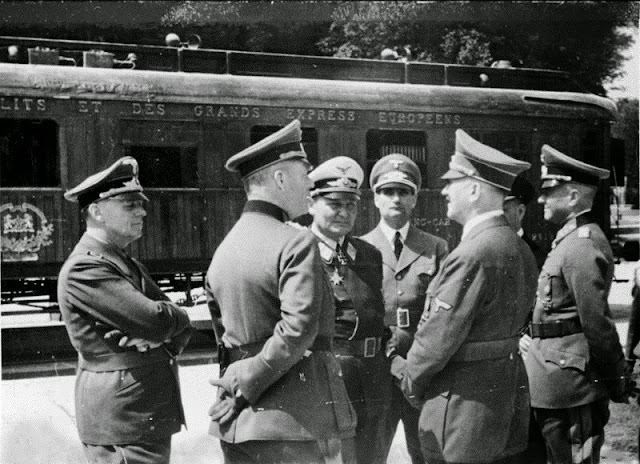 BTW, in another example of a military surrender response, witness the following photograph: 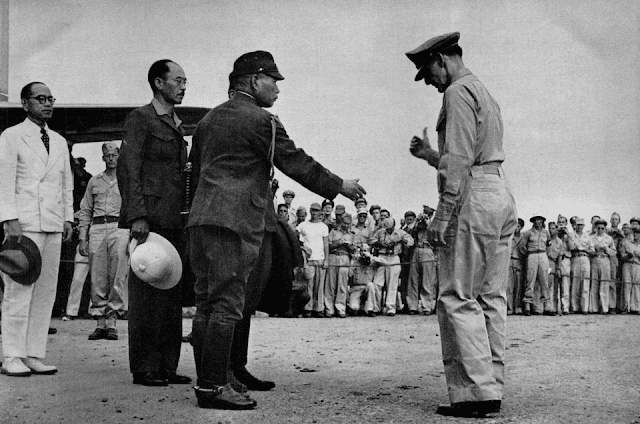 23 It shows a proffered handshake from Japanese Lt. General Torashiro Kawabe being refused by American Col. Sidney Mashbir (who knew Kawabe from before the war) during a Japanese visit to Manila to prepare the details for Japan's surrender ceremony. Col Mashbir is shown motioning by his thumb that Lt General Kawabe needed to move along. In his autobiography, Mashbir explained that he was not permitted to shake hands, and that it would have been rude to point, which ultimately lead to the awkward thumbing motion that was photographed.

Gough Whitlam, the 21st Prime Minister of Australia, was dismissed by the Queen’s representative, Sir John Kerr, the Governor General, after the Opposition blocked Supply (money to run the country). The Governor General’s secretary, David Smith, read the proclamation dissolving Parliament on the steps of Parliament House on 11 November 1975:

NOWTHEREFORE, I Sir John Robert Kerr, the Governor-General of Australia, do by this my Proclamation dissolve the Senate and the House of Representatives. Given under my Hand and the Great Seal of Australia on 11 November 1975.

God Save The Queen!

Whitlam stood fuming next to David Smith as the proclamation was read: 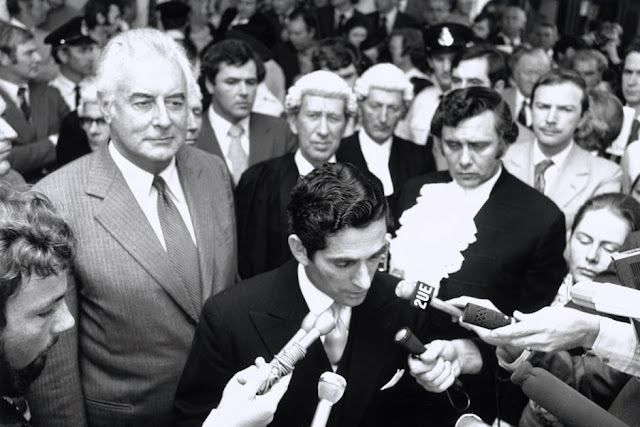 As soon as the words “God Save the Queen” were uttered, Whitlam took the microphone and spoke:

The proclamation which you have just heard read by the Governor-General’s official secretary was countersigned ‘Malcolm Fraser’ (boos and jeering) who will undoubtedly go down in Australian history from Remembrance Day 1975 as Kerr’s cur.

They won’t silence the outskirts of Parliament House, even if the inside has been silenced for the next few weeks (cheering).

The Governor-General’s proclamation was signed after he already made an appointment to meet the Speaker at a quarter to five.

Maintain your rage and enthusiasm through the campaign for the election now to be held and until polling day.

Ned Kelly (1854 - 1880), Australian bushranger (outlaw), was convicted of the murder of a police officer and sentenced to death by the harsh and unlikable Judge Redmond Barry. He had remained at large for 2 years, supported by an extensive network of sympathisers, and is renowned for his last stand with fellow gang members brother Dan Kelly, Steve Hart and Joe Byrne wearing armour made from metal from ploughs. The others were killed in that shootout. 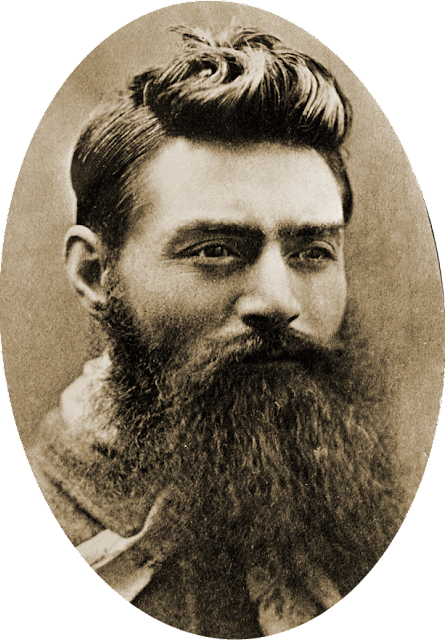 Ned Kelly, the day before his execution 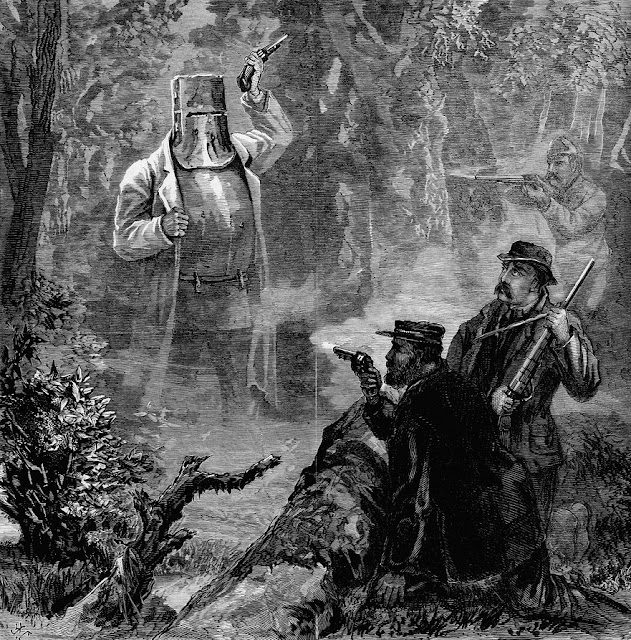 When Kelly appeared out of the mist-shrouded bush at Glenrowan, clad in armour, bewildered policemen took him to be a ghost, a bunyip, and "Old Nick himself".

On the morning of 11 November 1880, just before 10.00am, Kelly was led onto the scaffold. A newspaper illustration of the time showed that scene:

His last words were “Ah, well, I suppose it has to come to this. Such is life.”