Continuing the repost of the above items . . .

Because of the subject matter of this continuing series, there must of necessity be repeats of items or quotations posted in the previous 7 years of Bytes. For those who have read them before, hopefully you will find these as enjoyable on a re-read as for the first time. 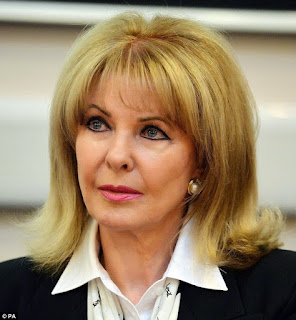 Marilyn "Mandy" Rice-Davies (1944 – 2014) was a British model and topless showgirl best known for her association with Christine Keeler and her role in the Profumo affair, which discredited the Conservative government of British Prime Minister Harold Macmillan in 1963.

Rice-Davies was never charged with being a prostitute, but Stephen Ward, another key figure in the saga, was found guilty at trial of being her and Keeler's pimp. That trial had been instigated only after the embarrassment caused to the government.

While giving evidence at Ward's trial for living off the avails of prostitution (immoral earnings, in U.K. law) Rice-Davies had it put to her by defence counsel James Burge that Lord Astor (with whom she claimed to have had sexual relations) had denied an affair or having even met her. She replied, "Well (giggle) he would, wouldn’t he?" (often misquoted "Well he would say that, wouldn't he?"). By 1979, this phrase had entered the third edition of the Oxford Dictionary of Quotations, and is occasionally abbreviated as MRDA ("Mandy Rice Davies applies") or referred to as the "Mandy Rice-Davies clause". 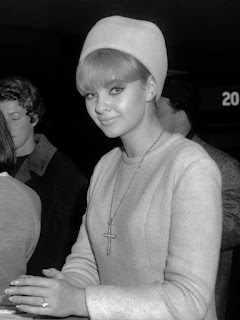 “Prince Andrew denies having sex with the 17 yearold girl.” MRDA.

“President Trump says that he has not done anything for which he should be impeached. ” MRDA

At the height of the scandal, the first prime minister of independent Malaya (now Malaysia) Tunku Abdul Rahman arrived in London for a visit. At a reception at Heathrow Airport when asked what he wanted to do first, he replied "I want Mandi" which shocked the reception party because they did not know that "Mandi" means "take a bath" in Malay.

In 1980 the Olympics were held in Moscow. The US and various other countries had withdrawn from the games as a protest against Russia’s involvement in Afghanistan, so tensions were high. The Russians felt that their plans and efforts for a spectacular Olympics had been deliberately sabotaged and that they had been humiliated in the eyes of the world.

In the pole vault, the battle for gold had come down to the Russian competitor, Konstantin Volkov, and the Pole Władysław Kozakiewicz (pronounced Vlad-is-lav Ko-za-kev-ich). At the time Poland was under the domination of the Soviet bloc, in effect Poland was run and controlled by Russia, a fact which the Poles hated with a vengeance.

The battle had come down to Kozakiewicz’s vault. A success would see him take gold, a fail would result in Volkov taking the gold and the Pole the silver.

As he readied himself and psyched for the jump, the Russian crowd in the Moscow stadium booed, jeered, whistled and yelled at Kozakiewicz, who maintained his concentration for the vault. He appeared not to hear them or to be aware of the noise directed towards him.

As he rose to his feet after landing, he turned to the hostile Russian crowd and delivered his salute to them: 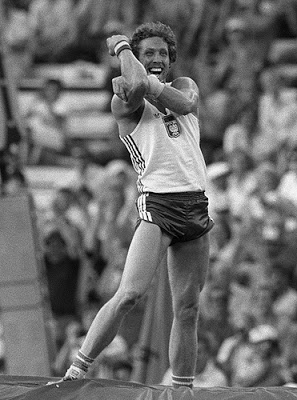 Such a mannerism has an official title: Bras d’honneur, French for “arm of honour”, as does the middle finger extended, the Doigt d'honneur, “finger of honour”. The finger gesture dates back to Ancient Rome, where it was known as the digitus impudicus (impudent finger). It has also been referred in ancient Greek comedy for insulting another person. The use in other countries is probably due to Roman and Greek influence.

In Poland, Kozakiewicz’s bras d’honneur became known as “Kozakiewicz’s gesture” and photos showed it worldwide, except in the Soviet Union and its satellites.

After the 1980 Olympics ended, the Soviet ambassador to Poland demanded that Kozakiewicz be stripped of his medal over his "insult to the Soviet people". The Polish government replied that, having investigated the alleged insult, it was clear that the gesture had been an involuntary muscle spasm caused by his exertion. 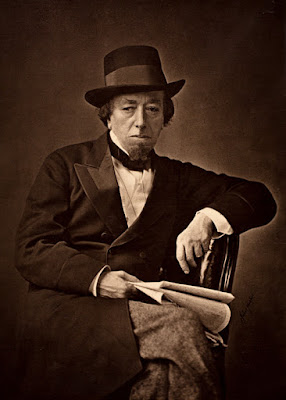 Benjamin Disraeli (1804 – 1881) was a British statesman of the Conservative Party who twice served as Prime Minister of the United Kingdom, in 1868 and 1874-1880. He has already featured in this series. 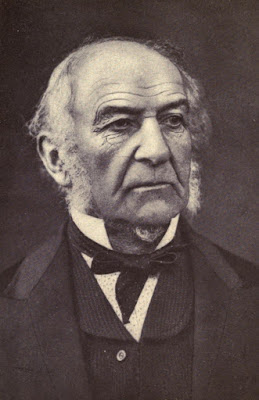 William Gladstone (1809 – 1898) was a British statesman of the Liberal Party. In a career lasting over sixty years, he served for twelve years as Prime Minister of the United Kingdom, spread over four terms beginning in 1868 and ending in 1894.

Disraeli and Gladstone were both politicians of extraordinary ability, but their personalities clashed and they heartily loathed each other.

On one occasion, Disraeli was asked to explain the difference between misfortune and calamity.

In 1943 Hitchcock was directing “Lifeboat” which was released in 1944. 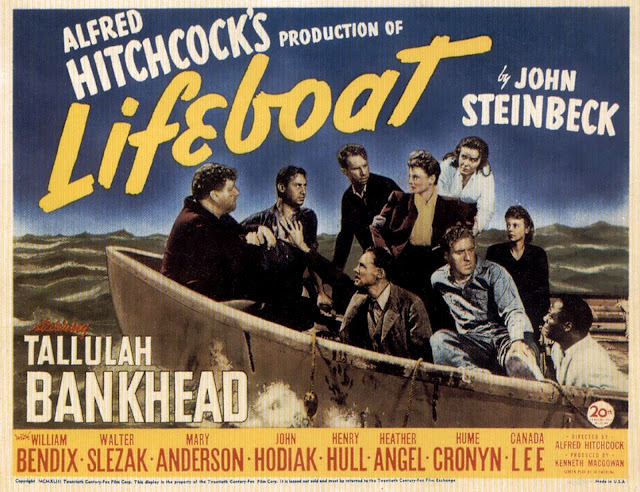 Mary Anderson was one of the stars of the film. 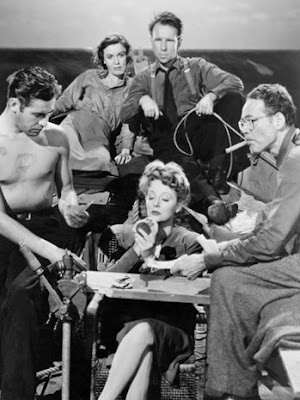 That's her at the back.  Btw, Hitchcock alwaysd makes a cameo appearance early in his films (early so that viewers are not distracted from watching the film).  There is a limit to including a cameo in a movie that is entirely about people in a lifeboat.  This was his appearance: 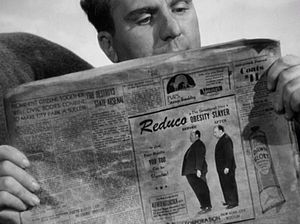 During filming, Anderson said to Hitchcock “Which is my best side, do you think?”

Hitchcock replied “You’re sitting on it.”

President John F Kennedy was the skipper of a PT (Patrol Torpedo) boat, PT 109, in WW2. On the night of 2 August 1943 the destroyer Amagiri, cut through the PT 109 diagonally, knocking Lt. Kennedy down and sending him into the steel bulkhead. 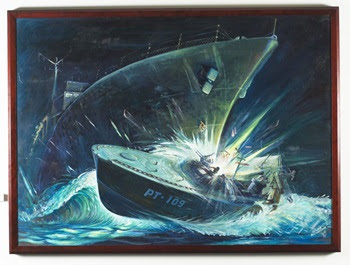 Two crewmen died. In the morning, having spent the night in the water, they made it to an uninhabited island, Kennedy swimming with a life vest strap of one of the injured men in his teeth. They were rescued on 8 August by islanders. Kennedy was awarded a Purple Heart and Navy / Marine Corps Medal. He was discharged in 1946.

When he ran for President in 1960, much was made of his war record. At one campaign stop he was asked by a young boy “How did you become a war hero?”

“It was involuntary. They sank my boat.” 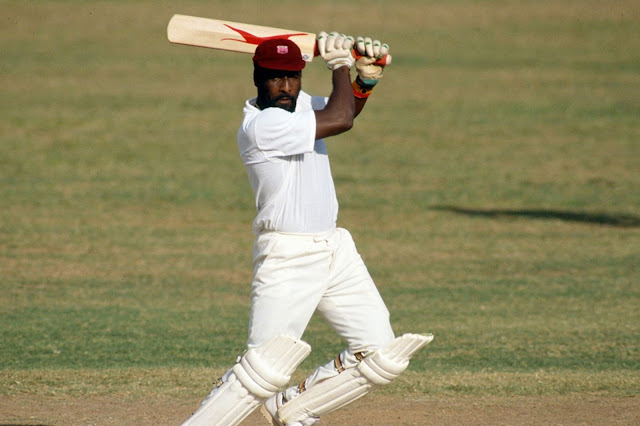 Sir Isaac Vivian Alexander Richards (1952 - ), known as Viv Richards, is a former Antiguan cricketer, who represented the West Indies at test and international levels. He is regarded as one of the greatest batsmen of all time. Richards was voted one of the five Cricketers of the Century by a 100-member panel of experts in 2000, along with Sir Donald Bradman, Sir Garfield Sobers, Sir Jack Hobbs and Shane Warne.

English bowler George Thomas, bowled three deliveries that went past Richards and to the keeper, Richards having swung but missed. Thomas walked up the pitch and said to Richards "It's red, round and weighs about five ounces, in case you were wondering. You’re supposed to hit it.”

On the next delivery Richards hit the ball out of the ground into a nearby river. He said to Thomas “You know what it looks like, now go and fetch it.”

Posted by BytesMaster at 7:00 AM