Badass of the Month

Badass
1.     A belligerent or mean person; a person with an unpleasantly extreme appearance, attitudes, or behavior.
2.     A person considered impressive due to courage, skill, and/or toughness.
-        Wiktionary 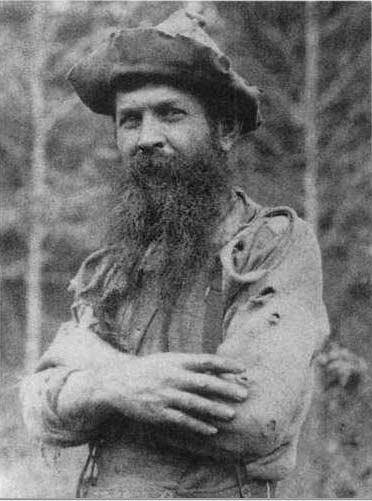 Ron T of Missouri brought Ben Lilly to my attention via an email after he was  introduced to Ned Kelly by my daughter.  Ron called Lilly “a not too well known, yet fascinating fellow.”  Ron gave me some facts about him, which are addressed below, and commented that “Google has pictures of Ben. One can almost smell the layers of grime, sweat, caked blood, and dog crap on his boots.”

Some facts about Ben Lilly, who has been variously called a latter-day Daniel Boone, the last of the mountain men and the greatest bear hunter in history after Davy Crockett . . .

Lilly was born in 1856 in Alabama and was raised in Mississippi as a devout Christian. At age 12 he was sent to a military academy but ran away.  His whereabouts were unknown to his family for a long time until his uncle by chance discovered him running a blacksmith shop in Memphis, TN, which came in handy later when he fashioned his own knives and traps. After his uncle's death, he inherited his uncle’s cotton farm.  In 1880 he married his first wife, Lelia, whom he referred to as "daughter of Sodom and Gomorrah".

In Louisiana he discovered his passion for big-game hunting after killing a black bear with a knife, and started relentlessly pursuing hunting as a career for the rest of his life. At first, he was making an income selling bear meat and wild honey. Then, he moved to east Texas, in the Big Thicket and lived for three years around 1904–1907 in the hunting camp of Ben Hook, with whom he partnered.

I never met any other man so indifferent to fatigue and hardship. The morning he joined us in camp, he had come on foot through the thick woods, followed by his two dogs, and had neither eaten nor drunk for twenty-four hours; for he did not like to drink the swamp water. It had rained hard throughout the night and he had no shelter, no rubber coat, nothing but the clothes he was wearing and the ground was too wet for him to lie on, so he perched in a crooked tree in the beating rain, much as if he had been a wild turkey. He equaled Cooper's Deerslayer in woodcraft, in hardihood, in simplicity–and also in loquacity.

He was known for the strength and stamina that stayed with him until old age.

Lilly did not smoke nor drink alcohol or coffee, facts that set him apart from the rest of his contemporaries

He was fond of eating bear and particularly cougar meat, which, he believed, in a similar fashion to Native American ideas, would give him feline powers.

He was one of the most accomplished houndsmen at the time in North America. 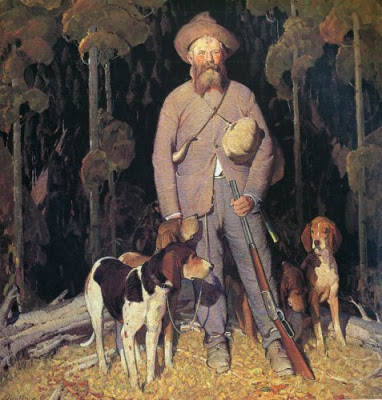 One source has Lilly killing 500 mountain lions and 600 bears. Others say he killed thousands. Regardless of the actual number, he is thought to have killed more black bears, grizzlies, and mountain lions than anyone of his time. 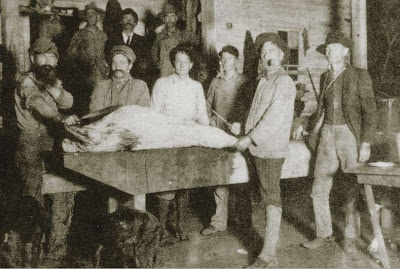 Lilly, far left, skinning a bear at a Texas ranch in 1906

Lilly was married twice and fathered several children, but neither marriage lasted.

Something of a wanderer, over the years he traveled through Louisiana, Texas, New Mexico, and Arizona.

He designed and handmade a special hunting knife with an 18-inch-long S-shaped blade that he carried throughout his lifetime. He was known many times to fight and dispatch in hand-to-hand combat bear and cougars using his self-made knife, named "The Lilly Knife".

Another of Lilly’s handmade knives

During the last 25 years of his life, he made a sufficient living as a professional hunter, sometimes using a pack of 20 hounds. Most of his earnings came from ranchers who hired him to exterminate predators, and he lived in the hills with his hounds, sleeping where he wanted and hunting where game was plentiful.

He also shot and prepared specimens for the U.S. Biological Survey and the National Museum.

Lilly lived in the forests and hills with just the clothes on his back, a canvas tarp, a wool blanket, his hunting knife, and a rifle or two. 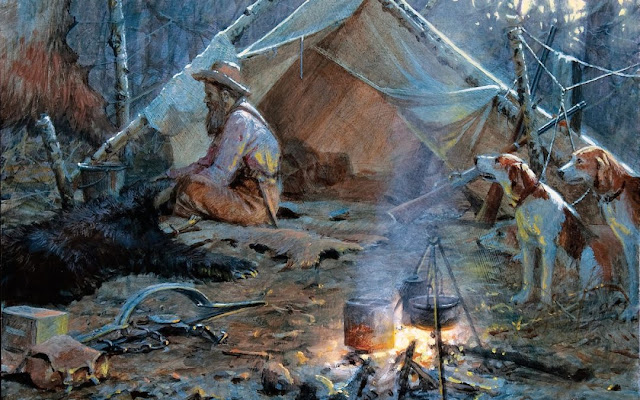 As a boy, Lilly perfected his shooting skills on moving targets such as buzzards and bats, darting bees and songbirds.  Lilly is reported to have wingshot bumblebees and spme said he could down mosquitos. He could shoot a buzzard out of the sky and hit it again and again before it hit the ground. All with a rifle.

From 1911 to 1926 between Ben's fifty-fifth and seventieth years, he reached his goal of hunting every day of the year, except Sundays.

From Wikipedia:
He was no doubt, one of the most destructive individuals contributing to the reduction of North American apex predators to the brink of extinction, an act contrary to modern standards of both ethical hunting and wildlife conservation.

Lilly stayed strong and able well into old age.  He claimed his vitality a result of living in nature and also to the belief that 'you are what you eat.'  Lilly held that his diet of lion and bear meat endued him with those animals' abilities.

Lilly was also known to be a keen observer of animal habits.  He would often keep the lion cubs from a kill and raise them affectionately, studying their behaviors before killing the adult animal.  Awww.

Lilly with a couple of his lion cubs

Ironically, Ben Lilly died in bed in a farmhouse where he was rooming in 1936.

Posted by BytesMaster at 1:30 AM