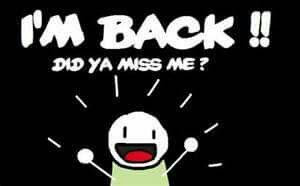 Like General MacArthur, I have returned. Had Dante been living in the present age he would have had a tenth circle of Hell: malfunctioning computers. My laptop is still not fully okay but good enough to get by and to send out some Bytes posts.

Hopefully you are all well and coping with these strange and grim days.

Last week I mentioned my father in law, Noel, in the context of a classic joke, referring to them both as oldies but goodies.

Noel rang me today to say thanks for the mention in dispatches.

The poor b lives in Canberra and has been missing his daily sojourn to his local café for his coffee and to say hello to various ladies in an assortment of shops and venues.

He only stopped driving this year but still studies, researches and remains mentally and physically active.

Some quick facts and comments about Noel:


Born in Rockhampton, Queensland in 1927.

Joined the public service at 15 and left home to reside on his own in Brisbane.
Began by making the glue that was used to stick papers in files.  Likes to say that he was one of the first persons made redundant by technology, to wit, the paperclip. 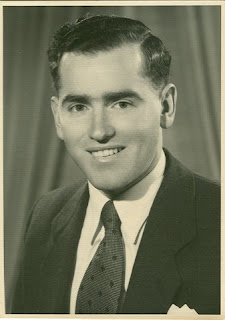 Studying as he was working, obtained his Higher School Certificate and a university degree in psychology.

At age 17 he hosted a weekly one hour radio jazz show in Brisbane.  Used to badger record shop owners to get him jazz records.  Today he knows the words to nearly every jazz song, even the obscure ones, and has an encyclopaedic knowledge of jazz.

Married Margaret and was married for 62 years until her passing.  She accepted his proposal, both being unaware that at the time Noel was suffering from Bell's Palsy, which causes a paralysis of one side of the face.  As she used to say, it must have been love because she accepted despite the fact that he was dribbling red wine down one side of his face and leering at her out of one eye.
Raised four daughters.

In 1955 he was a personnel manager in Papua New Guinea, often flying from location to location in rickety little aircraft.  On one occasion Noel was the sole passenger in a plane where the pilot was a priest and the plane was in danger of crashing. “What are you like at praying?” asked the priest. “I haven’t done too much in recent times,” Noel replied, to which the priest responded “Normally praying is my job but I’m too busy and, trust me, someone should be praying.”  With the priest flying and Noel praying, they made it.

Noel worked his way up to Secretary to the Executive Council, part of his duties being to act as the liaison between the Cabinet of the Whitlam Government and the Governor General, Sir John Kerr. As such, he was one of the dranmatis personae of the Dismissal. Noel was required to give evidence to the Royal Commission investigating the Khemlani Loans Affair and, arising from comments made by Gough Whitlam, obtained a written apology from Mr Whitlam for defamatory comments made by Whitlam. 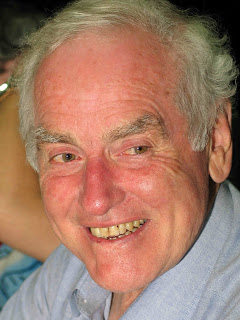 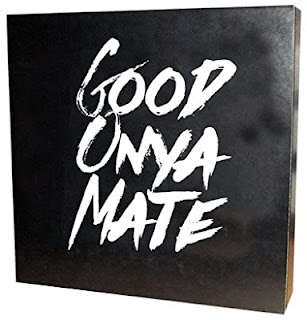 In honour of a top bloke who is on his own in isolation in Canberra, here are two items from the vault . . .

Noel is known within the family as “Nelly”.

There was a young lady from Thrace
Whose corsets no longer would lace.
Her mother said, "Nelly,
There's more in your belly
Than ever went in through your face!"

Whilst I was looking up something on the internet last year, I came across an article on the history of Gorman House in Canberra, which features some interesting comments about Noel.

The article is at:
http://www.gormanhouse.com.au/info/history.php

(I have today checked that link but it no longer works, nor have I been able to find the article).

Gorman House was built in 1924 as a hostel for Commonwealth Public Servants. As the place of first contact for so many Canberrans, Gorman House featured strongly in the social history of Canberra, particularly during the city's early development as the Federal Capital of Australia. Thousands of people lived at Gorman House during its 48 years as a hostel. Ex-residents remember it warmly for its atmosphere of camaraderie and for its simple but graceful design. Now a lively and centrally located Arts Centre, Gorman House is important in a new way to the Canberra community. 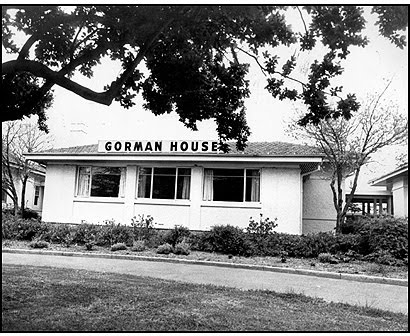 Following is an extract from that article:

According to Mrs Freda Bennett of Campbell and Audrey Trevellyan of Griffith, Mrs Dickson replaced Mrs Holmes as manager, who in turn gave way to a Mrs Coles. Mrs Coles was renowned for listening at keyholes late at night, knocking on doors and demanding "Have you got a man in there?".

In 1949 the post-war push of men back into the civilian work-force had its impact on Gorman House. The hostel re-admitted male residents, although according to some, this was not the first time a man had been there after 11pm in the previous ten years.

Noel Wicks was the first man to take up accommodation at Gorman House in 1949. This may have required courage, as not all the girls were keen on the idea. Gone were the cosy nights, making toast and cocoa in the lounge by a roaring fire in their pyjamas and dressing gowns. Men meant propriety, which was a lot more trouble.

Mr Wicks came to Canberra from Brisbane on a Public Service cadetship. He remembers that quarters for men and women were segregated and that more men joined him at Gorman House soon after, so that before long the numbers of men and women were pretty even.

"Rooms were Spartan" he said "There was a desk, a bed, a chair and a basin. We had a cupboard and probably a table. There was no curfew, but guests of the opposite sex were supposed to be out by 10 or 11 pm. But, the rule was ignored."

On one unfortunate occasion, Mr Wicks recalls attempting to assist someone who had locked themselves out of their room by climbing up the nearby drainpipe. Sadly, he fell but luckily his dignity bore the worst of his injuries.

Now, in a parallel universe, Noel wasn't shinnying up the drainpipe to help a damsel locked out of her room. Instead, in that other universe, Noel was on his way to an assignation but mistakenly used the wrong drainpipe. The lady who answered a tap on her window to find a strange man outside, some distance from the ground, let him have it on the nose. But, as I said, that was in a parallel universe...

Pictured below: Noel at Pialligo Nursery in the ACT, 2009 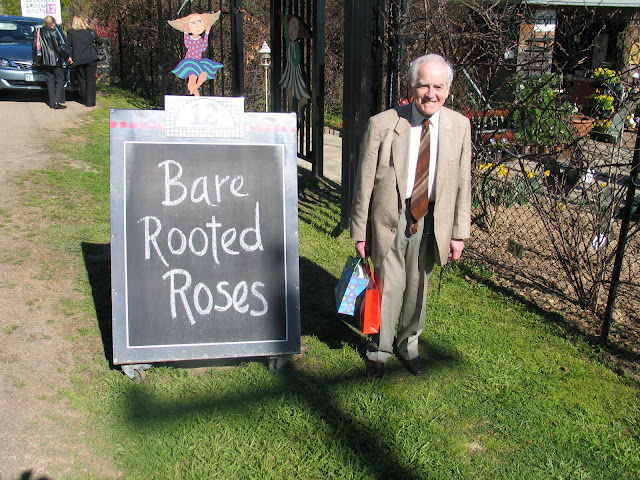 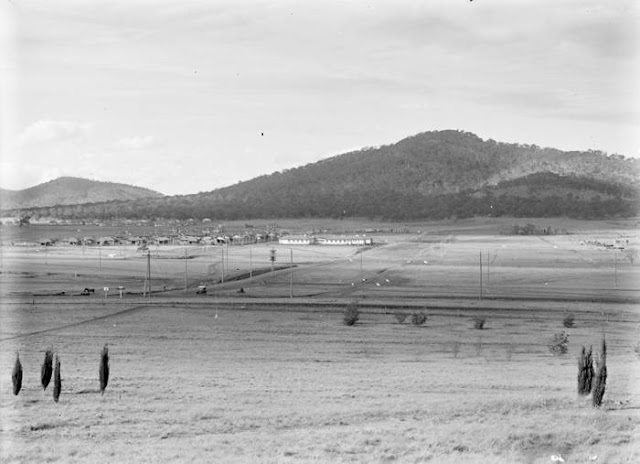 View from City Hill in 1926, with Gorman House in the background 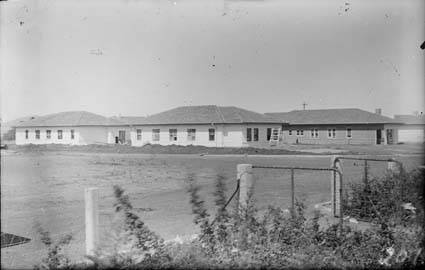 Gorman House while it was still under construction. 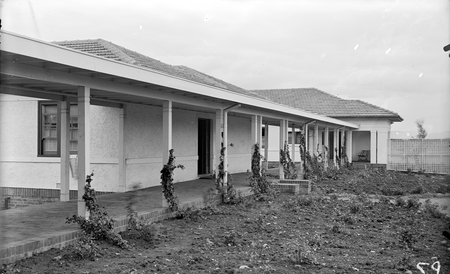 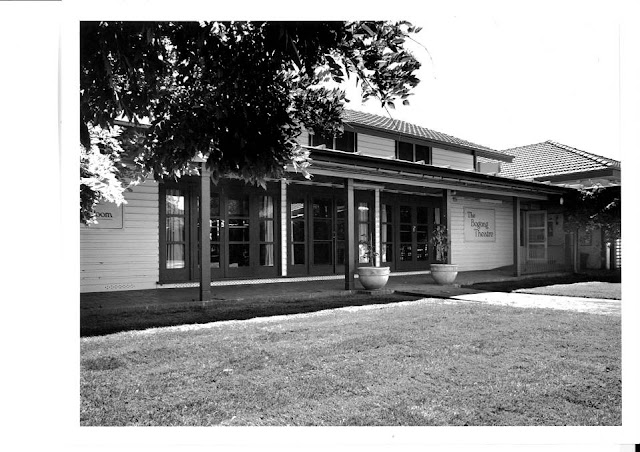 Gorman House in the 1980s, shortly after it became Gorman Arts Centre. 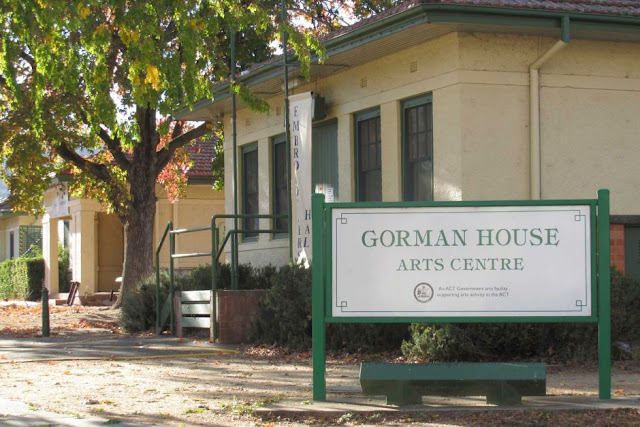 Stay safe Nelly, readers.
Posted by BytesMaster at 12:15 AM