Pulitzer and World Press Photos of the Year, continued - 1991

The Pulitzer and World Press Photos of the Year

One of the most moving images of 9/11 is a photograph that has been named “The Falling Man”.  It is a picture of an unidentified male falling head first from one of the upper floors of one of the WTC buildings in a manner that seems almost peaceful.  Most US news outlets have declined to publish it because it is so sad and disturbing. 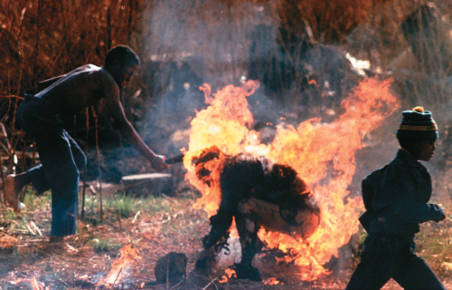 Description by the photographer, Greg Marinovich
South Africa, 15 Sep 1990
A man hacks at a burning Lindsay Tshabalala with a machete, a Zulu killed as a suspected Inkatha member by African National Congress supporters. Over 3,000 people died in 1990 as a result of ANC-Inkatha violence that was provoked by a state-sponsored destabilisation programme, prior to South Africa's first democratic elections in 1994.

Soweto. South Africa: It’s not yet dawn when Greg Marinovich and Associated Press reporter Tom Cohen stumble onto a gunfight between supporters of the African National Congress and the predominantly Zulu Inkatha Freedom Party. A train pulls into a nearby station; a Zulu man, Lindsaye Tshabalala, disembarks. "He could have been returning from a night shift or making an early start to visit friends," says Marinovich.ANC youths seize Tshabalaia. "They began to stone and stab him. I watched in shock as he fell to the ground." The assault intensifies; finally, "a man hauled out a massive, shiny Howie knife and stabbed hard into the victim's chest. My heart was racing and I had difficulty taking deep enough breaths. I called out 'Who is he?’ ‘What’s he done?’ A voice from the crowd replied. "He's an Inkatha spy."When Marinovich tries to argue, the attackers insist he stop taking pictures. Marinovich says, "I'll stop raking pictures when you stop killing him." The brutal attack continues. "For those crucial minutes, it was as if I lost my grasp of what was going on. The pictures I kept mechanically snapping off would later substitute for the events my memory could not recall."The Zulu now lies motionless on the ground. Marinovich is momentarily drawn away by an attack on another man. "Suddenly, I heard a hollow 'whoof’ and women began to ululate in a celebration of victory. Dread filled me. The man I thought dead was running across the field below us. His body enveloped in flames. A bare-chested, barefoot man ran into view and swung a machete into the mans blazing skull as a frantic young boy fled from this vision of hell."Marinovich makes it back to his car. "I pulled over and. closing my eyes, began to beat the steering wheel with my fists. I could finally scream."

A reader’s comment at the above site:
JACK HERMAN 7mo
All these years later, this image captures a world within us where there is no escape - only the "steering-wheel" realization that if we scream loud enough, our inner angels will awaken with a renewed sense of purpose and strength. Thank you for screaming on behalf of the humanity in us all.

[Greg Marinovich is a member} . . .  “of ‘The Bang-Bang Club,’ a group of photographers who documented the final bloody years of South African apartheid before the 1994 elections.Marinovich stopped shooting in the field after his fourth gunshot injury, which took place in Afghanistan. He had previously been shot three times in South Africa."After Afghanistan, I realized that this was just not productive," he tells Fresh Air's Gross. "After several weeks [after being shot for the fourth time], it just dawned on me that I don't want to do this anymore, and I don't want to be injured anymore."In 1994, Marinovich was shot and his friend Ken Oosterbroek, another member of the Bang-Bang Club, was killed while covering a battle in South Africa."I thought [the bullet] had gone through me," Marinovich says. "Nobody wanted to look. I wasn't breathing properly and all sorts of things because my lung had been punctured. And there were a couple of other wounds, rather embarrassingly, in my buttocks and in my hand."In his memoir, The Bang-Bang Club: Snapshots from a Hidden War, which he co-wrote with Silva, Marinovich describes thinking his injury in South Africa was it. 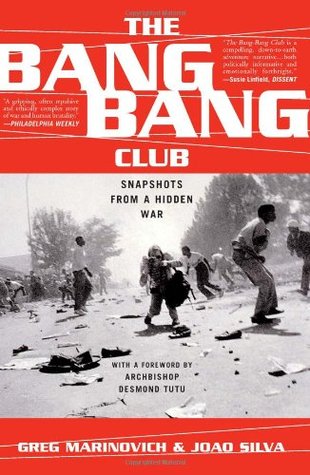 I had paid my dues," he wrote. "I had atoned for the dozens of close calls that had always left someone else injured or dead while I emerged from the scenes of mayhem unscathed, picture in hand, having committed the crime of being the 'lucky voyeur.' "And that sensation of guilt, Marinovich says, stayed with him while covering other war zones."Just seeing someone — especially a mother over a young child or a young fighter or a young civilian who's being killed — and that look they give you as you come to photograph them, while you're kind of apologizing about photographing," he says. "And people want you photographing to show what's happened, but that look of hatred — that sometimes you get from a mother — is just so disturbing."Marinovich received the Pulitzer Prize in 1991 for Spot News Photography. He later became the Associated Press' chief photographer in the Middle East. Joao Silva has received numerous awards, including the World Press Photo award. Silva and Marinovich collaborated on the The Bang-Bang Club book, which has now been made into a film starring Ryan Phillippe and Taylor Kitsch. The film tells the stories of the four combat photographers who risked their lives to capture the atrocities committed during apartheid. 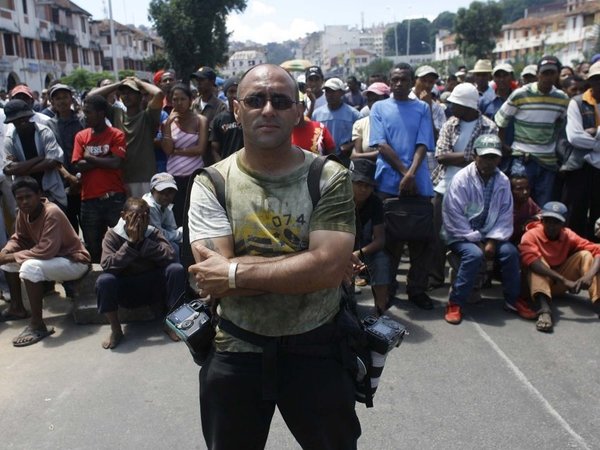 Photographer Joao Silva seen while on assignment in Madagascar in 2009. Silva lost both legs when he stepped on a mine while covering U.S. troops in southern Afghanistan in October 2010.

Greg Marinovich on the difficulties of publishing his 1991 Pulitzer Prize-winning series of photos, which showed a man attacked with a machete and then set on fire in South Africa:

"I didn't try and get it published. At the time I was freelancing, and I was shooting for the AP and also for Sigma, the photo agency. And so I had two separate cameras. One had color negative for AP and one had color slide for Sigma. And the AP put the pictures up. They put up 18 pictures in all. And newspapers complained about the graphic nature of those pictures, and many didn't publish those pictures. It wasn't that the 'burning man' wasn't widely published at all — certainly not in South America and not in America, and I can understand that; they are very disturbing pictures, and that's up for a newspaper to decide what they want to publish — but the tangential argument from that is that it's not up to us as photographers to censor that. It's not up to us to not shoot it because it's too graphic or too disturbing. It's not up to us to not edit that and put that in the take, and it's certainly not up to the distributing agency to decline to put those pictures in the take because of their graphic nature. In fact, it was the New York office of the AP that almost didn't want to move those pictures on. Because London had taken them in ... and in New York, it was difficult. They almost didn't move the picture."

"Journalism is not a profession. It's a craft. So you don't need any training to become one. You can just do it ,which is the route that I came. And so ethics and morality and the kind of New York Times set of rules about what you can and can't do and the guidelines that you receive there wasn't a part of my background. I came to it more as a citizen and as a person than a photographer. So my thoughts about interceding and not interceding — whether it was characters or a photographer — were unformed and they became formed. And what I stuck to was really, why does it matter if you intercede to save somebody or not? And I did, on many occasions, attempt and sometimes succeed and sometimes not. It's a very strange thing. It varies from day to day with what you're thinking and what you're feeling and what the situation is. To intercede, to change the picture, is unethical. To intercede at the cost of doing your job as a journalist, I think that's a personal choice you make. And I have no issue with people on the other side of that divide."

Greg Marinovich on the ethics of war photography:

"The other thing that photographers struggle with is the setting up of pictures. And by that, I mean, where the photographer interferes in the scene to make it a better picture — where essentially fiction and nonfiction blur — that we have real problems with. I remember a very famous New York-based photographer was at the funeral of Chris Hani, the communist leader who was assassinated by white extremists. He was directing the show to make for a better picture, and we all immediately wrote to his employer — his contract employer at the time was Time magazine — and he was pulled off the job immediately. And this other photographer we spoke about — the right-winger — he would hire a Mercedes-Benz and drive into the township and drive up and down the volatile areas until people started stoning his cars so that he could get the pictures."