Pianist-singer behind “Tutti Frutti,” “Good Golly Miss Molly,” and “Long Tall Sally” set the template that a generation of musicians would followLittle Richard, a founding father of rock & roll whose fervent shrieks, flamboyant garb, and joyful, gender-bending persona embodied the spirit and sound of that new art form, died Saturday. He was 87. The musician’s son, Danny Jones Penniman, confirmed the pioneer’s death to Rolling Stone. The musician’s lawyer, Bill Sobel, added that the cause of death was bone cancer.

Starting with “Tutti Frutti” in 1956, Little Richard cut a series of unstoppable hits – “Long Tall Sally” and “Rip It Up” that same year, “Lucille” in 1957, and “Good Golly Miss Molly” in 1958 – driven by his simple, pumping piano, gospel-influenced vocal exclamations and sexually charged (often gibberish) lyrics. “I heard Little Richard and Jerry Lee Lewis, and that was it,” Elton John told Rolling Stone in 1973. “I didn’t ever want to be anything else. I’m more of a Little Richard stylist than a Jerry Lee Lewis, I think. Jerry Lee is a very intricate piano player and very skillful, but Little Richard is more of a pounder.” 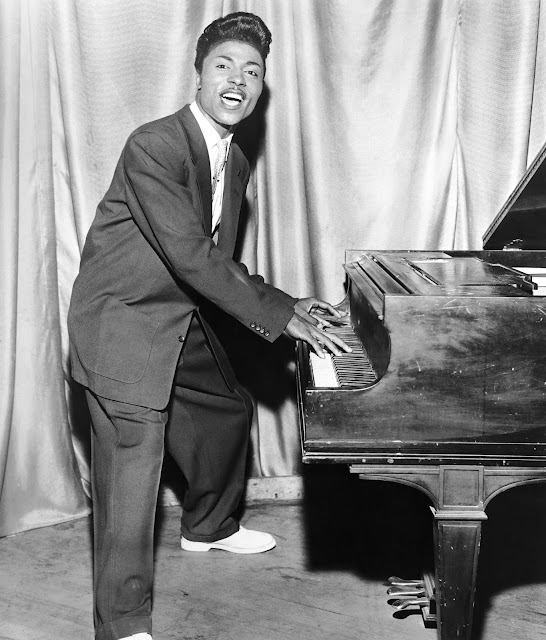 Some facts and trivia about Little Richard (some risqué content included) . . .

Born Richard Wayne Penniman in Macon, Georgia, on December 5, 1932, the third of 12 children of Leva Mae (née Stewart) and Charles "Bud" Penniman. His father was a church deacon and a brick mason, who sold bootlegged moonshine on the side and owned a nightclub called the Tip In Inn. His mother was a member of Macon's New Hope Baptist Church.

Initially, his first name was supposed to have been "Ricardo", but an error resulted in "Richard" instead. In childhood, he was nicknamed "Lil' Richard" by his family because of his small and skinny frame.

Penniman grew up around uncles who were preachers and began singing in church at a young age.

Possibly as a result of complications at birth, he had a slight deformity that left one of his legs shorter than the other. This produced an unusual gait, and he was mocked for his allegedly effeminate appearance.

His father was not supportive of his son’s music and accused him of being gay.  This resulted in Penniman being ejected from home at 13 and moving in with a white family in Macon. That family, Ann and Johnny Johnson, ran Macon's Tick Tock Club, where Penniman first performed.

He adopted the stage name “Little Richard” because he was tired of people mispronouncing his last name as “Penny-man”.

In 1954 he returned to Macon, where he began washing dishes at the Greyhound bus station.  After his father was murdered he financially supported his family.  Whilst working as a dishwasher he sent a tape with a rough version of a bawdy novelty song called “Tutti Frutti” to Specialty Records in Chicago. He also co-wrote “Long Tall Sally” while working that job.

In 1955 a cleaned up version of Tutti Frutti became his first hit, peaking at 17 on the pop chart. ’Tutti Frutti really started the races being together,” he told Rolling Stone in 1990. “From the git-go, my music was accepted by whites.”

Means “all fruits” in Italian.

"A-wop-bop-a-loo-bop-a-wop-bam-boom!" is Little Richard’s verbal rendition of a drum pattern.

With its hard-driving sound and wild lyrics, it became not only a model for many future Little Richard songs, but also a model for rock and roll itself.  The song introduced several of rock music's most characteristic musical features, including its loud volume and vocal style emphasizing power, and its distinctive beat and rhythm.  In 2007, a panel of renowned recording artists voted "Tutti Frutti" number one on Mojo's The Top 100 Records That Changed The World, hailing the recording as "the sound of the birth of rock and roll."

Some of the lyrics that the producer insisted be cleaned up:

The references to a homosexual man:

Tutti Frutti, good booty
If it don't fit, don't force it
You can grease it, make it easy

Tutti Frutti, good booty
If it's tight, it's all right
And if it's greasy, it makes it easy

with the sexual wording being replaced by the above repeated phrase.

"Aw rooty" was a slang expression meaning "All right".

The follow up, “Long Tall Sally,” hit Number Six, becoming his the highest-placing hit of his career. For just over a year, Little Richard released one smash after another. From “Long Tall Sally” to “Slippin’ and Slidin,’” Little Richard’s hits were a mix of boogie, gospel, and jump blues.

Out of Richard's approximately 36 songs for Specialty, seven were gold:

By now he was sporting his trademark pompadour and makeup, which he once said he started wearing so that he would be less “threatening” while playing white clubs.

The Oz connection, from Wikipedia:

In October 1957, Penniman embarked on a package tour in Australia with Gene Vincent and Eddie Cochran. During the middle of the tour, he shocked the public by announcing he was following a life in the ministry. Penniman would claim in his autobiography that during a flight from Melbourne to Sydney that his plane was experiencing some difficulty and he claimed to have seen the plane's red hot engines and felt angels were "holding it up". At the end of his Sydney performance, Penniman saw a bright red fireball flying across the sky above him and claimed he was "deeply shaken". Though it was eventually told to him that it was the launching of the first artificial Earth satellite Sputnik 1, Penniman claimed he took it as a "sign from God" to repent from performing secular music and his wild lifestyle at the time.Returning to the States ten days earlier than expected, Penniman read news of his original flight having crashed into the Pacific Ocean as a further sign to "do as God wanted". After a "farewell performance" at the Apollo Theater and a "final" recording session with Specialty later that month, Penniman enrolled at Oakwood College in Huntsville, Alabama, to study theology.

The Kansas City connection (for Acacia, Joe, Ron and Barb):

Specialty continued to release Penniman recordings, including "Good Golly, Miss Molly" and his unique version of "Kansas City", until 1960.

Hear "Kansas City", and see a selection of Little Richard pics, by clicking on the following link:
https://www.youtube.com/watch?v=OMq_tmGX264

This version has the rawest lyrics. 12th Street and Vine where the hookers hung out. "They got a crazy way of lovin' and I'm going to get me some." Most of the later versions water it down.

Another version by Little Richard is at:
https://www.youtube.com/watch?v=n84WLM8N8Fw

Little Richard obtained a BA and was ordained a Seventh Day Adventist minister.  He did not return to rock until 1964 but various comeback attempts failed.  Music had changed direction and the British invasion, spearheaded by the Beatles, was the new sound.  Funnily enough Little Richard was one of Paul McCartney’s idols.  Have a look at McCartney singing “I’m Down” to see the Little Richard influence:
https://www.youtube.com/watch?v=1VMM7aAJNLI

By the end of the 60’s, Little Richard stressing his attachment to the church, was preaching and singing gospel, and renouncing rock & roll, drugs.

From 1985 he made numerous appearances on TV shows, provided his music as background fpor films and made further recordings.  He also continued to tour.

As a preacher he performed weddings for several celebrities including Cyndi Lauper, Little Steven Van Zandt, Bruce Willis and Demi Moore, and spoke at the funerals of musician friends Wilson Pickett and Ike Turner.

Little Richard was among the first 10 inductees into the Rock and Roll Hall of Fame in 1986. In 1993 he received a Lifetime Achievement Award from the National Academy of Recording Arts and Sciences. And performed at Bill Clinton's presidential inaugural in 1992. He has also received the Rhythm & Blues Foundation's Pioneer Award. In 2004 he was ranked among the Top ten on Rolling Stone's Immortals list.

Little Richard’s influence was massive. The Beatles recorded several of his songs, including “Long Tall Sally,” and Paul McCartney’s singing on those tracks – and the Beatles’ own “I’m Down” – paid tribute to Little Richard’s shredded-throat style. His songs became part of the rock & roll canon, covered over the decades by everyone from the Everly Brothers, the Kinks, and Creedence Clearwater Revival to Elvis Costello and the Scorpions. “Elvis popularized [rock & roll],” Steven Van Zandt tweeted after the news broke. “Chuck Berry was the storyteller. Richard was the archetype.” 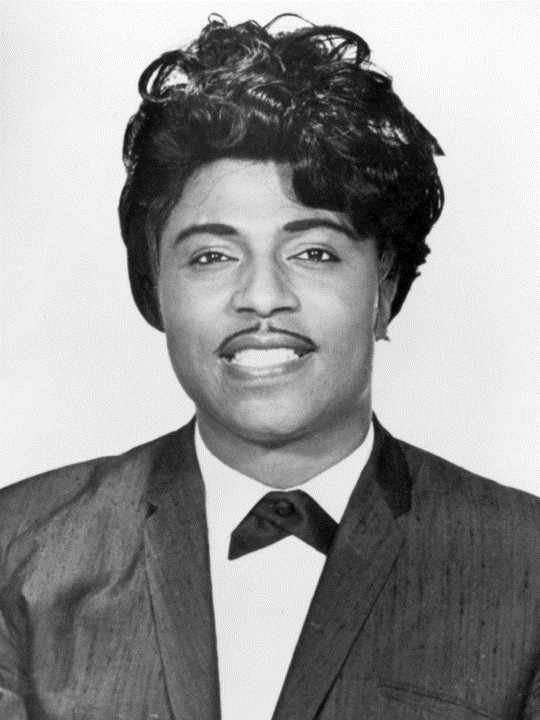