In myth, Rhea was the wife of the Titan Kronos (Cronus) and Queen of Heaven. When her husband heard a prophecy that he would be deposed by one of his children, he took to swallowing each of them as soon as they were born. But Rhea bore her youngest, Zeus, in secret and hid him away in a cave in Krete (Crete) guarded by shield-clashing Kouretes (Curetes). In his stead she presented Kronos with a stone wrapped in swaddling clothes which he promptly devoured. 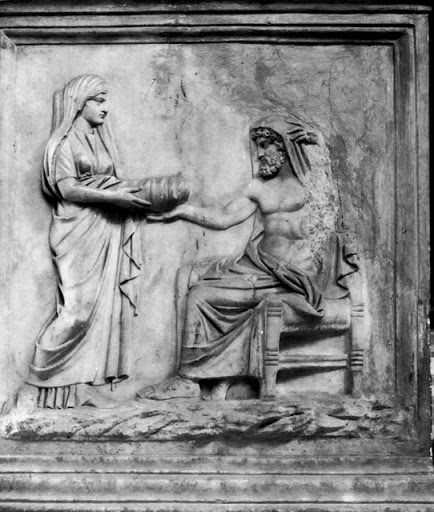 In ancient Egypt, Isis was worshipped as a mother goddess. Her son Horus was said to be the first of the Pharaohs.

During the 1600's, England celebrated a day called "Mothering Sunday", celebrated on the 4th Sunday of Lent. This was a time put aside for relaxation and enjoyment during the long Lenten fast. Servants would go home to see their families, bringing cakes and sweets to their mothers. This custom was called "going a-mothering". Each mother would receive a simnel-cake (Latin for "fine flour) and mothers would give a blessing to their children.

Other lore relates that centuries ago it was considered important for people to return to their home or "mother" church once a year. So every year during Lent, people would visit their "mother" church, generally the main church or Cathedral of the area.  It is believed that the custom of going back to their mother church, being the church where one was baptized, the local parish church, or the nearest cathedral (the latter being the mother church of all the parish churches in a diocese), gave rise to the custom of Mothering Sunday, honouring the mothers of children and giving them presents. 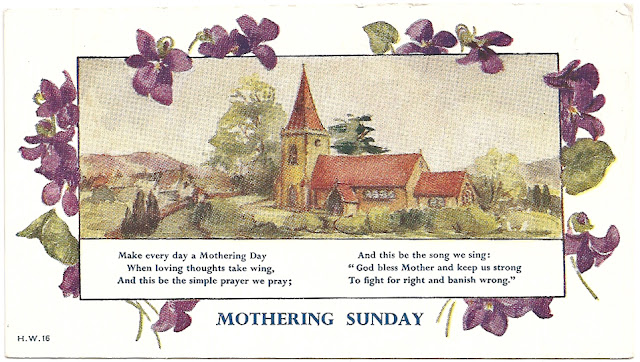 Early "Mother's Day" in the US was mostly recognized by woman's peace groups. An early activity was the meeting of groups of mothers whose sons had served or died on opposite sides of the American Civil War. There were local celebrations in the 1870s and the 1880s, but nothing to speak of on a state or national basis.

In 1868 Ann Jarvis created a committee to establish a "Mother's Friendship Day" whose purpose was "to reunite families that had been divided during the Civil War", and she wanted to expand it into an annual memorial for mothers, but she died in 1905 before the celebration became popular,
o------------oOo------------o

Anna Maria Jarvis (1864 – 1948) was the founder of Mother's Day in the United States. Her mother had frequently expressed a desire for the establishment of such a holiday, and after her mother's death, Jarvis led the movement for the commemoration. 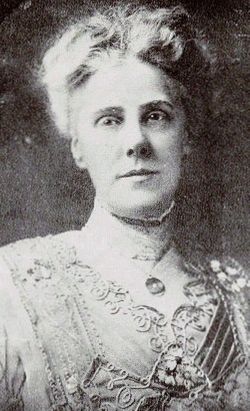 Anna Jarvis, the founder of Mother’s Day who neither married or had children.

However, as the years passed, Jarvis grew disenchanted with the growing commercialisation of the observation (she herself did not profit from the day).

She wanted Mother’s Day “to be a day of sentiment, not profit.” Beginning around 1920, she urged people to stop buying flowers and other gifts for their mothers, and she turned against her former commercial supporters. She referred to the florists, greeting card manufacturers and the confectionery industry as “charlatans, bandits, pirates, racketeers, kidnappers, and termites that would undermine with their greed one of the finest, noblest, and truest movements and celebrations.”

Years after she founded Mother’s Day, Anna Jarvis was dining at the Tea Room at Wanamaker’s department store in Philadelphia. She saw they were offering a "Mother’s Day Salad." She ordered the salad and when it was served, she stood up, dumped it on the floor, left the money to pay for it, and walked out in a huff.

Jarvis’s ideal observance of Mother’s Day would be a visit home or writing a long letter to your mother. She couldn’t stand those who sold and used greeting cards: “A maudlin, insincere printed card or ready-made telegram means nothing except that you’re too lazy to write to the woman who has done more for you than anyone else in the world.”

She added: “Any mother would rather have a line of the worst scribble from her son or daughter than any fancy greeting card.”

Jarvis fought against charities that used Mother’s Day for fundraising. She was dragged screaming out of a meeting of the American War Mothers by police and arrested for disturbing the peace in her attempts to stop the sale of carnations. She even wrote screeds against Eleanor Roosevelt for using Mother’s Day to raise money (for charities that worked to combat high maternal and infant mortality rates, the very type of work Jarvis’s mother did during her lifetime).

In one of her last appearances in public, Jarvis was seen going door-to-door in Philadelphia, asking for signatures on a petition to rescind Mother’s Day. In her twilight years, she became a recluse and a hoarder. 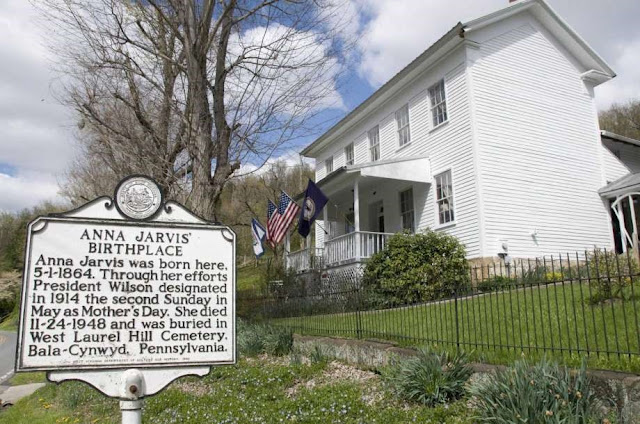 Jarvis spent her last days deeply in debt and living in the Marshall Square Sanitarium, a now-closed mental asylum in West Chester, Pennsylvania. She died on November 24, 1948.

In the ultimate irony, unknown to her, people connected with the floral and greeting card industries paid the bills to keep her in the sanitarium.

Mother's Day isn't always on the same date each year.  The holiday is celebrated every year on the second Sunday of May. This year it is on May 10th.

More telephone calls are made on Mother's Day than on any other day of the year.

Expect there to be more this virus year.

Mother's Day is the third highest selling holiday in the US for flowers and plants.

After Christmas and Hanukkah, more people buy flowers and plants for their moms on Mother's Day than any other holiday. Around approximately one quarter of all the flowers purchased throughout the year are bought for Mother's Day.

Not sure about Oz, seeing as how Hanukkah doesn’t get much of a mention here.

Mother's Day is the busiest day of the year for restaurants.  According to the National Restaurant Association, in 2018 in the US about 87 million adults made plans to go to a restaurant for Mother's Day.

Expect that to be less in this virus year.

In the vast majority of the languages worldwide, the word for "mother" begins with the letter M. It appears somethings are almost universal.

The words “Mom” and “Mum” come from babies.

The first thing a baby can vocalise is the 'ma' sound, which is why in almost every language the word for mother begins with the letter 'M' or is some iteration of the 'ma' sound.

According to the Guinness Book of Records, the greatest officially recorded number of children born to one mother is 69, to the wife of Feodor Vassilyev (b. 1707–c.1782), a peasant from Shuya, Russia. In 27 confinements she gave birth to 16 pairs of twins, seven sets of triplets and four sets of quadruplets.

Numerous contemporaneous sources exist, which suggest that this seemingly improbable and statistically unlikely story is true and she is the woman with most children.