Captain Cook 250 years on, and his statue

James Cook (1728 – 1779) was a British explorer, navigator, cartographer, and captain in the British Royal Navy. Cook made detailed maps of Newfoundland prior to making three voyages to the Pacific Ocean, during which he achieved the first recorded European contact with the eastern coastline of Australia and the Hawaiian Islands, and the first recorded circumnavigation of New Zealand.

Cook was attacked and killed in 1779 during his third exploratory voyage in the Pacific while attempting to kidnap the Island of Hawaii's monarch, Kalaniʻōpuʻu, in order to reclaim a cutter stolen from one of his ships. 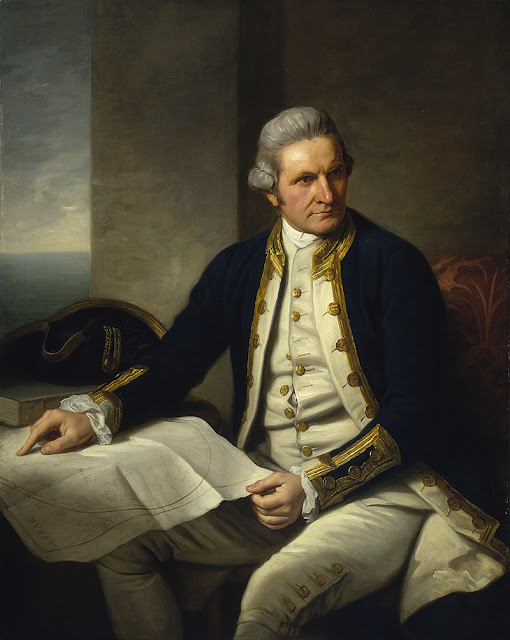 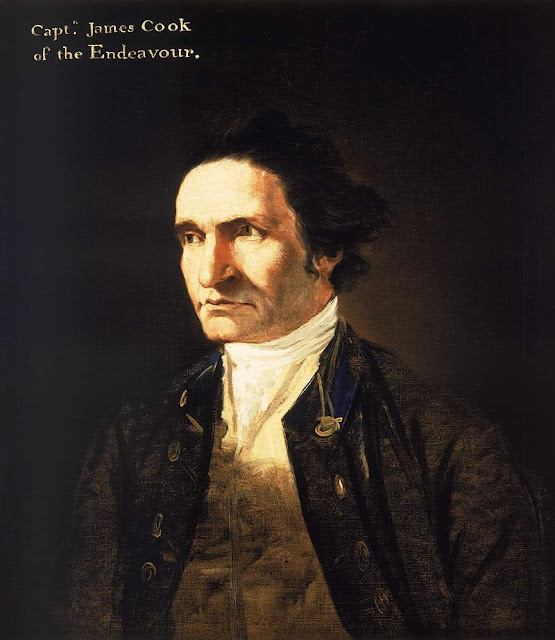 Portrait of James Cook by William Hodges, who accompanied Cook on his second voyage

In 1768, the Admiralty commissioned Cook to command a scientific voyage to the Pacific Ocean. The purpose of the voyage was to observe and record the 1769 transit of Venus across the Sun which, when combined with observations from other places, would help to determine the distance of the Earth from the Sun. Cook, at age 39, was promoted to lieutenant to grant him sufficient status to take the command. The expedition sailed aboard HMS Endeavour, and observed the transit of Venus on 13 April 1769, but the result of the observations was not as conclusive or accurate as had been hoped.

Once the observations were completed, Cook opened the sealed orders, which were additional instructions from the Admiralty for the second part of his voyage: to search the south Pacific for signs of the postulated rich southern continent of Terra Australis. Reaching the southeastern coast of Australia on 19 April 1770, his expedition became the first recorded Europeans to have encountered its eastern coastline.

There are other European contenders for the title of “discoverer of the continent”, such as Dirk Hartog in 1616 and William Dampier in 1699. However, both inconveniently landed on the west coast. Although Englishman Dampier wrote a book about his discoveries, he never became a major figure like Cook.

Historian Chris Healy has suggested that Cook was suited to the title of founder of Australia because his journey along the entire east coast made him more acceptable in other Australian states. Importantly, unlike that other great contender for founding father, the First Fleet’s Governor Arthur Phillip, Cook was not associated with the “stain of convictism”.

On 23 April, he made his first recorded direct observation of indigenous Australians at Brush Island near Bawley Point, noting in his journal: "... and were so near the Shore as to distinguish several people upon the Sea beach they appear'd to be of a very dark or black Colour but whether this was the real colour of their skins or the C[l]othes they might have on I know not."

On 29 April, Cook and crew made their first landfall on the mainland of the continent at a place now known as the Kurnell Peninsula. Cook originally named the area "Stingray Bay", but later he crossed this out and named it "Botany Bay” after the unique specimens retrieved by the botanists Joseph Banks and Daniel Solander. It is here that Cook made first contact with an aboriginal tribe known as the Gweagal.

Whilst exploring Botany Bay his party shot an indigenous male for throwing stones at them, thereby setting the tenor of relations with indigenous Australia. 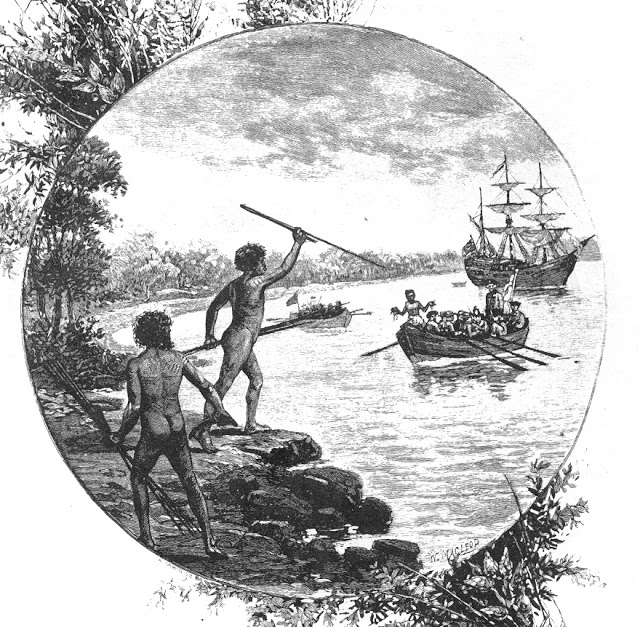 Which is all by way of a segue, albeit a lengthier one than I had intended, to pics of the Captain Cook statue in Hyde Park, Sydney.

Cook has become a focus of the campaign against statues and memorials of historical figures which are perceived to commemorate racism and/or injustice. Even before the Black Lives Matter protests saw an escalation of such movement, Cook’s cottage and statue had been regularly targeted on Australia Day: 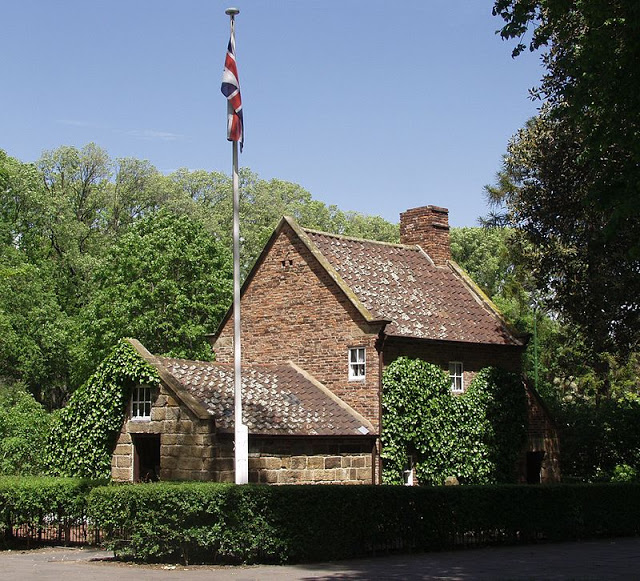 The cottage in Melbourne of the parents of Captain Cook regularly gets targeted for protest graffiti about Australia Day. The cottage was purchased in England and transported to Melbourne, where it was rebuilt brick by brick. Although it is not known whether Cook lived in the cottage, he certainly visited his parents there. 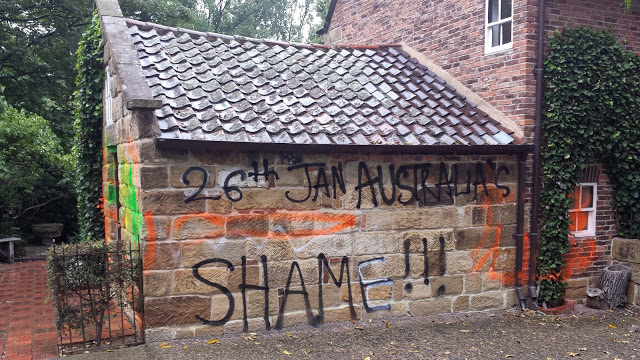 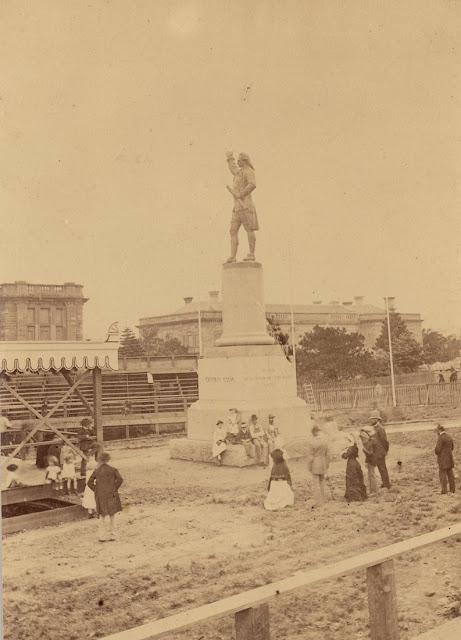 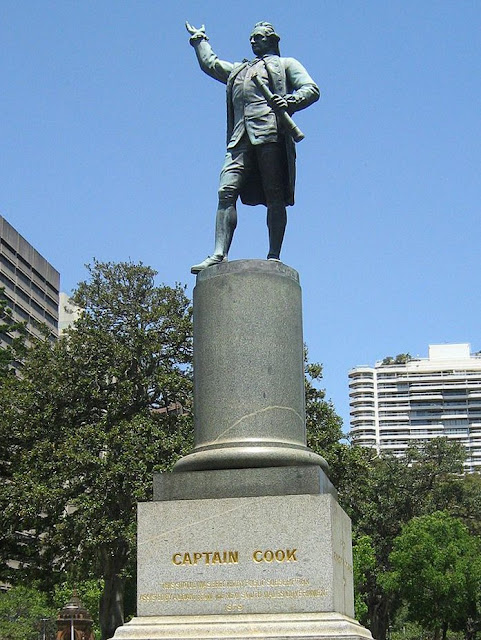 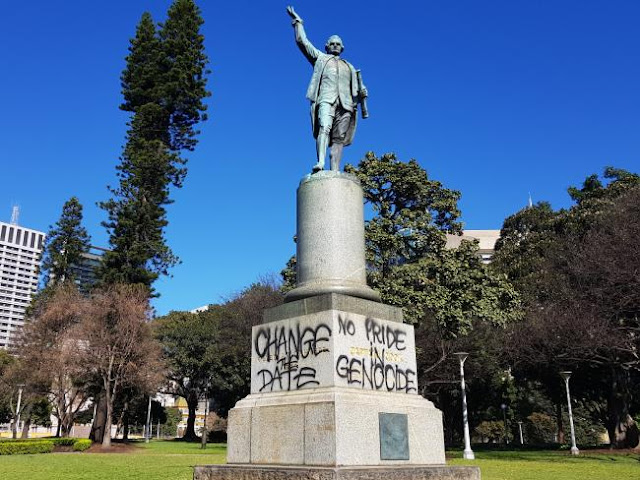 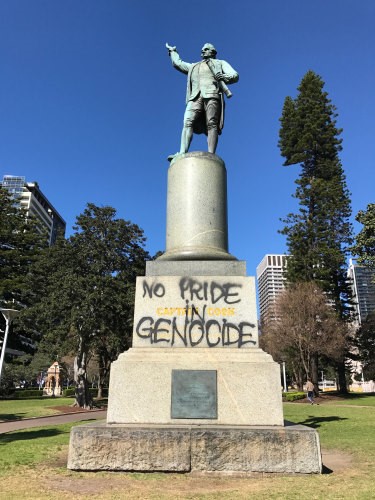 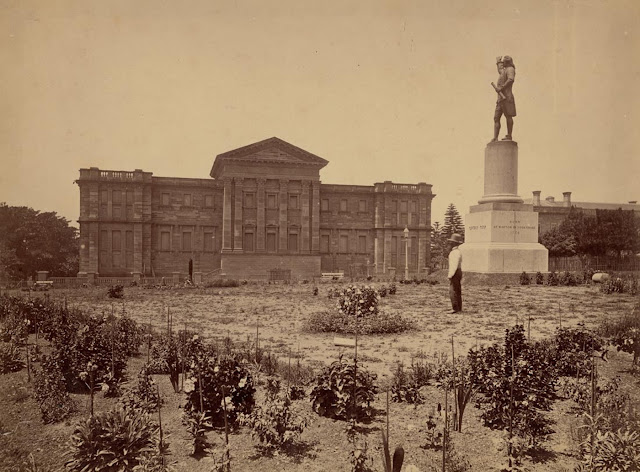 The statue of Captain James Cook, erected in Hyde Park opposite the Australian Museum, was unveiled on 25 February 1879. It commemorated Cook's death in Hawaii in 1779. Although Hyde Park's greenery may look old, most of its vegetation and 600 trees were planted after construction of the city's underground railway in the 1920s. In 1844 it was described as 'merely a large piece of brown ground fenced in'. 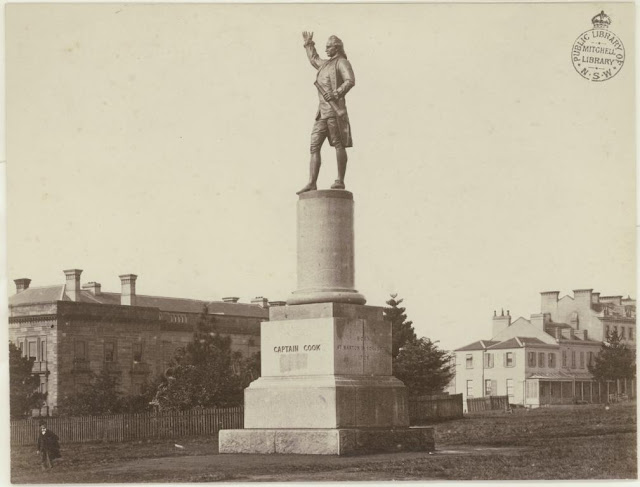 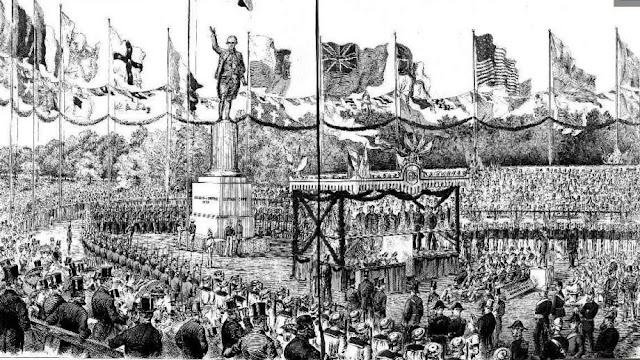 The ceremony of unveiling the statue of Captain Cook, Hyde Park, Sydney on 25 February 1879 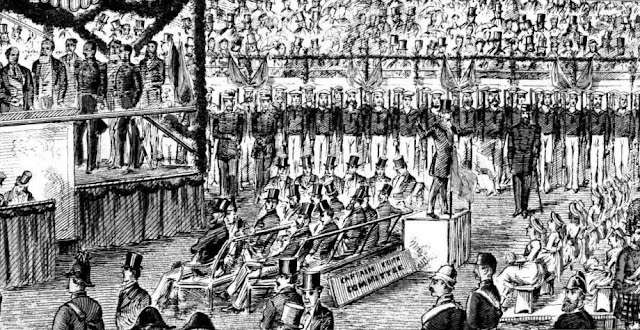 Detail from the above illustration 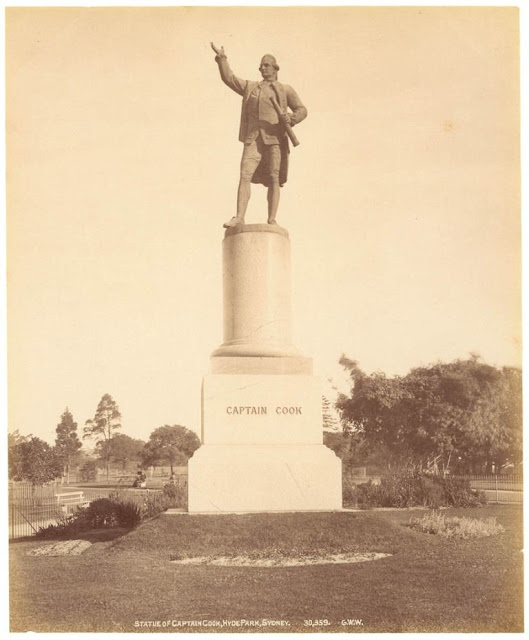 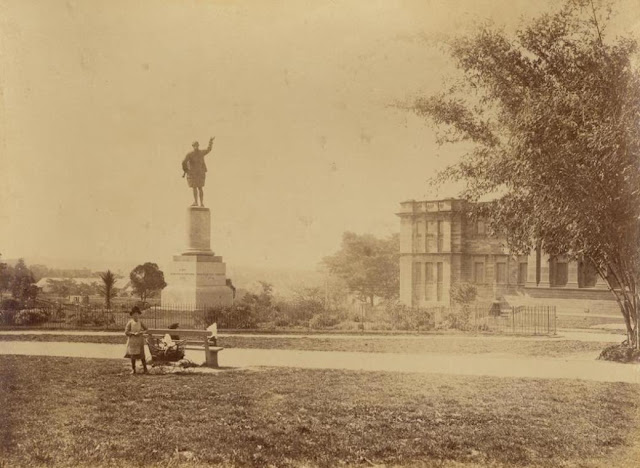 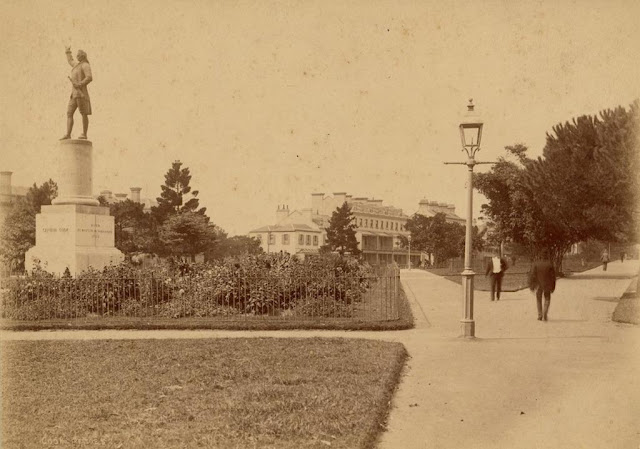 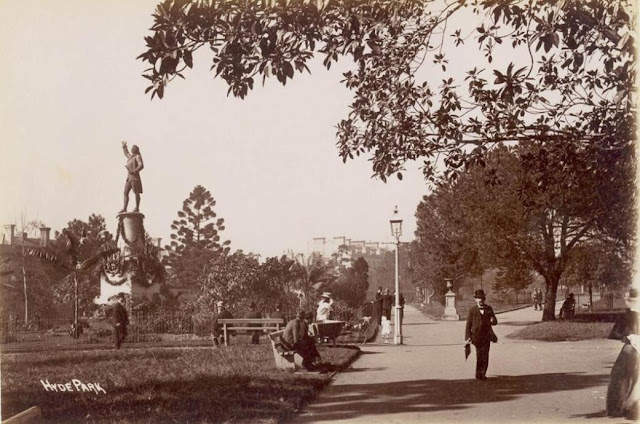 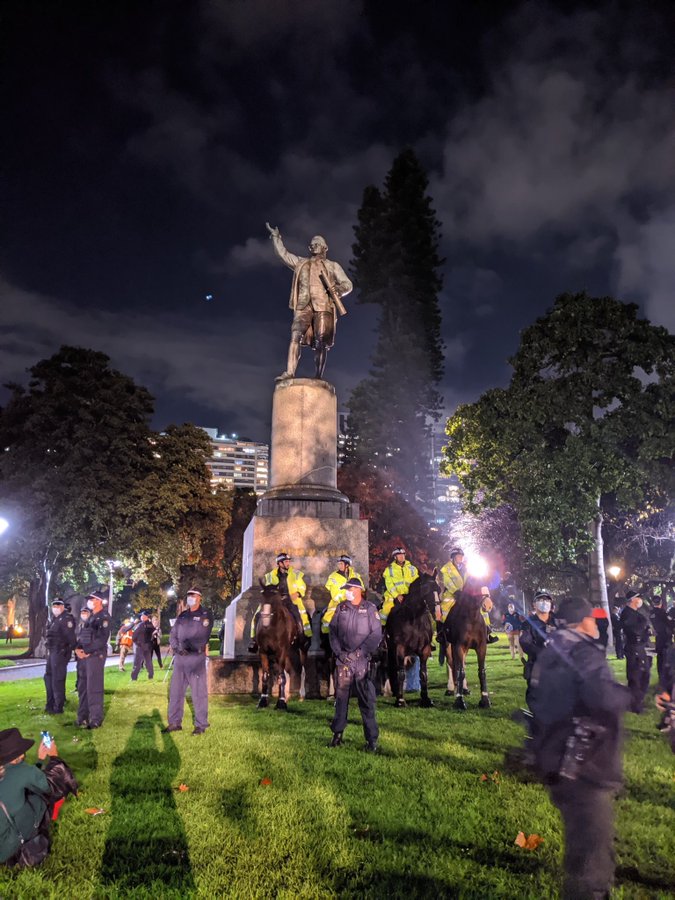 Protecting the statue from protestors, June 12, 2020 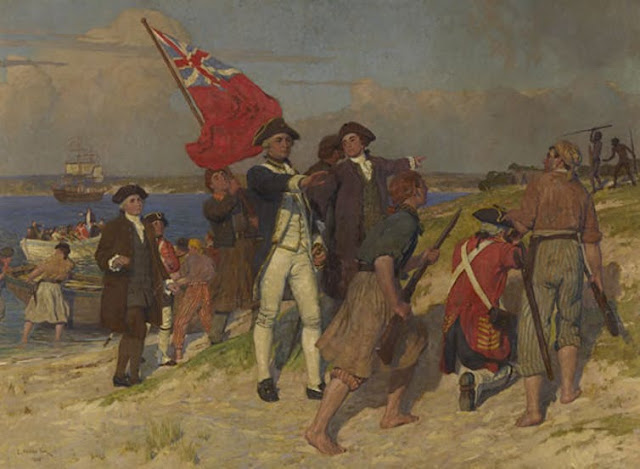 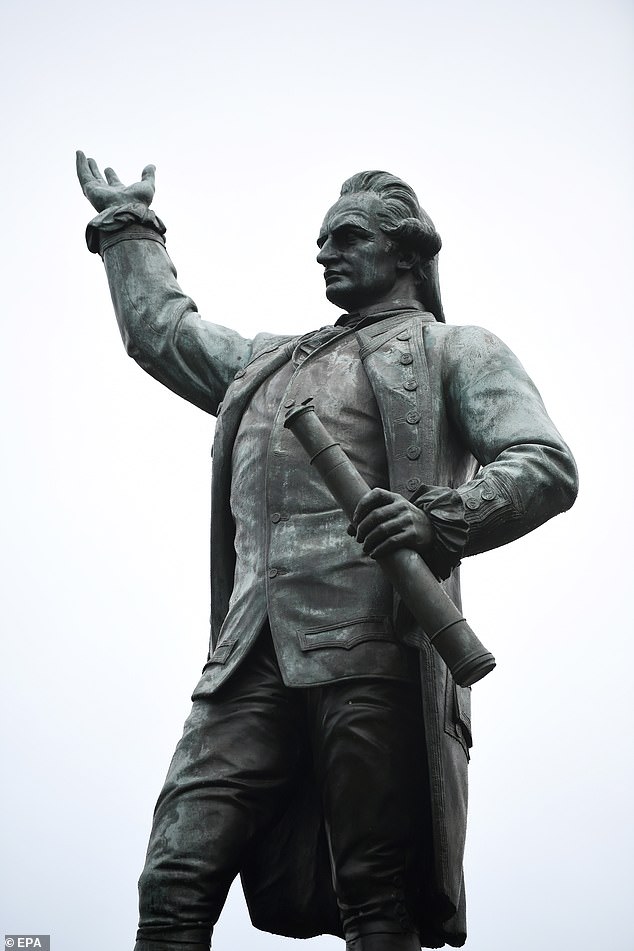 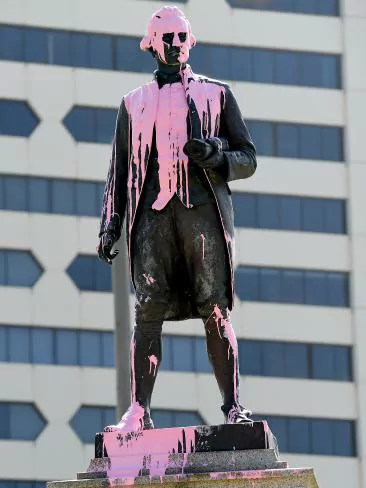 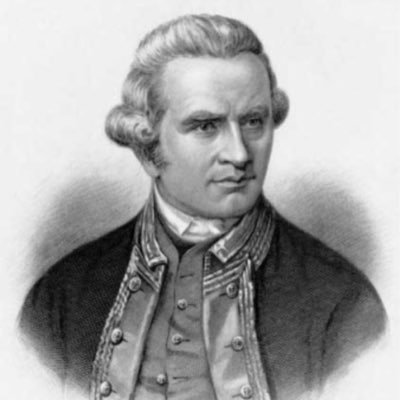 Posted by BytesMaster at 7:15 AM