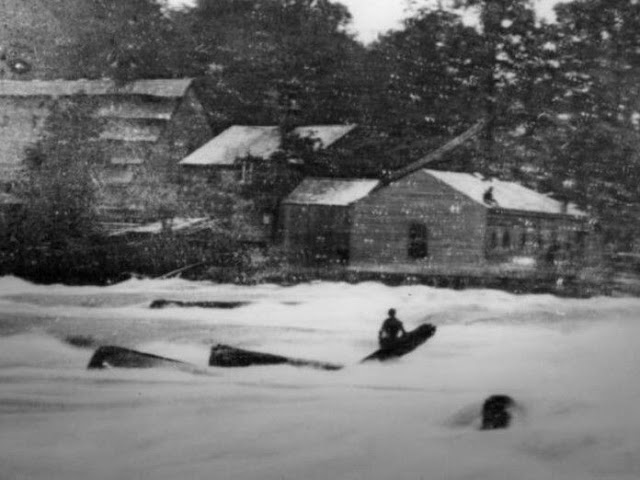 A man named Joseph Avery stranded on a log in the Niagara River after his boat sank, 1853. He held on for 18 hours before being swept over Niagara Falls to his death. The image is an early example of a news photograph.

July 16th 1853 - three men working on a dredging scow (barge) which was anchored in the Niagara River east of Goat Island decided to go to shore during the afternoon. The only way to shore was by use of a row boat. As the three men started rowing to shore, they soon discovered that the current of the water was much stronger than they had anticipated. Suddenly one of their oars broke. The small row boat entered the American Channel rapids and swept downstream. The rowboat capsized. Two of the men were swept to their death over the brink of the American Falls. The third man, Samuel Avery, was able to grab onto some tree roots growing from a rock just east of Chapin Island. Avery spent the night stranded in the cool fast flowing water. The sound of the rapids prevented any of Avery's screams for help to be heard.

The next morning, Avery's plight was observed by several tourists. Efforts to rescue Avery began. Initial efforts consisted of releasing boats and raft from the Bath Island Bridge. None of the craft were able to reach Avery. Finally a boat which was tethered to the Bath Island Bridge was guided downstream and reached Samuel Avery. With little strength left, Avery was able to climb into the boat but the boat immediately capsized throwing Avery back into the turbulent waters. Throwing his hands up in surrender, Avery let out a final scream, fell backwards into the water and was swept to his death over the American Falls.
_________________

The city of Berezniki, in Russia’s Ural mountains, is slowly sinking into the earth. The city of more than 150,000 individuals was built directly on top of a potash mine, which was standard practice during Soviet times. After nearly a century of extraction, deep voids were left underneath the city. The ceilings of these huge underground caverns are supported only by walls and pillars of soluble salt. In 2006, when a freshwater spring began flowing into the mine some 720 to 1,500 feet below the surface, it dissolved the supporting pillars and the city came crashing down.

A significant part of the residential districts and enterprises of the city are affected by the sinkholes, of which there are several in the city. The largest of them nicknamed “The Grandfather” is nearly four hundred meters across and more than two hundred meters deep. It threatens to engulf the only rail line which leads to and from the potash mines. Berezniki produces around ten percent of the world’s potash, and the mines are the city’s biggest employer. Closure of the mines would be damaging to the local economy.

A range of high-tech instruments including video surveillance system, seismic sensors, regular surveys and satellite monitoring of the changes in altitude of roofs, sidewalks and streets, are now used in Berezniki to predict the formation of sinkholes.

Federal officials and company executives are debating whether to relocate the entire city to the opposite bank of the Kama River, where the bedrock is solid. But engineers have assured them that the era of sinkhole formation is over, and no new holes will open as much of mine is now flooded.

About 12,000 residents have already left Berezniki for stable grounds, but the rest who’ve decided to stay put will have to keep close watch. 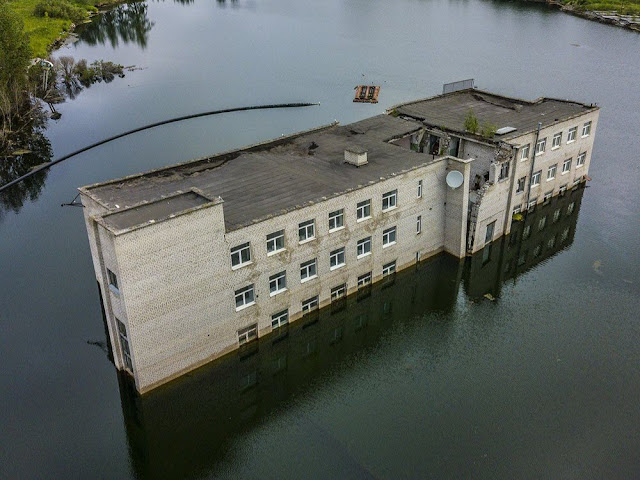 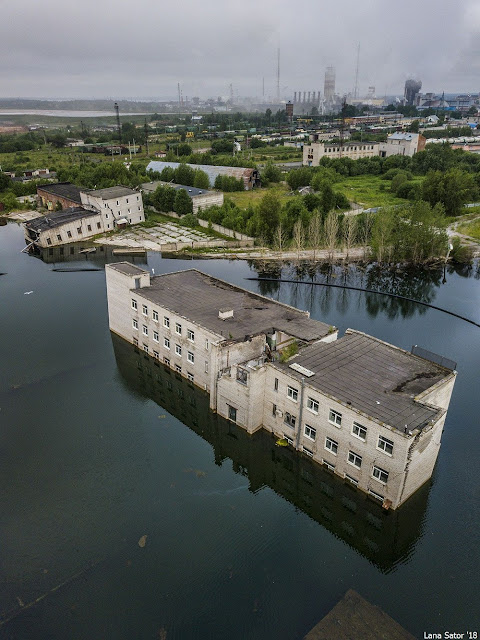 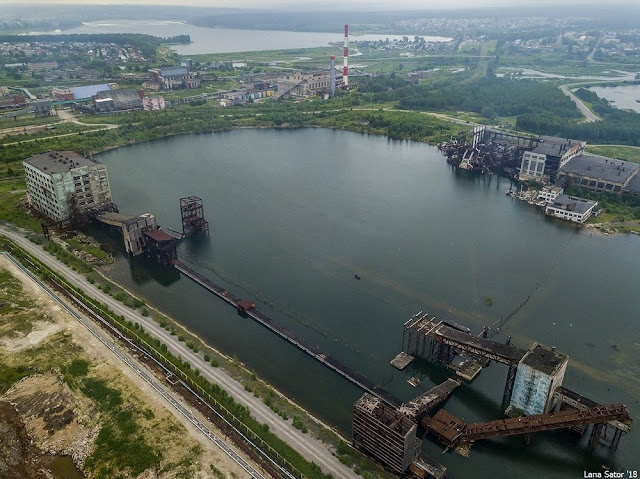 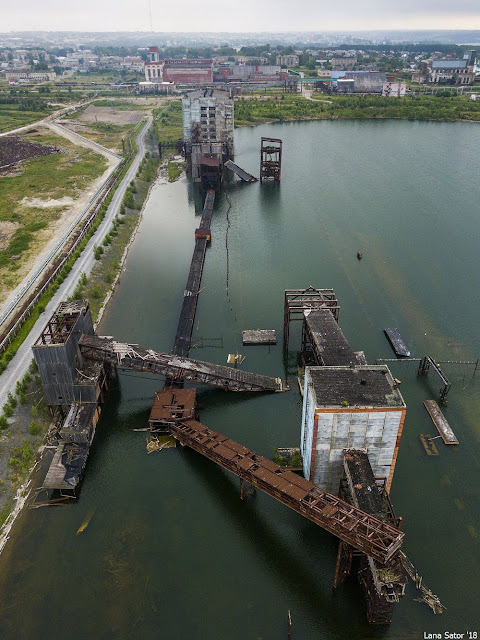 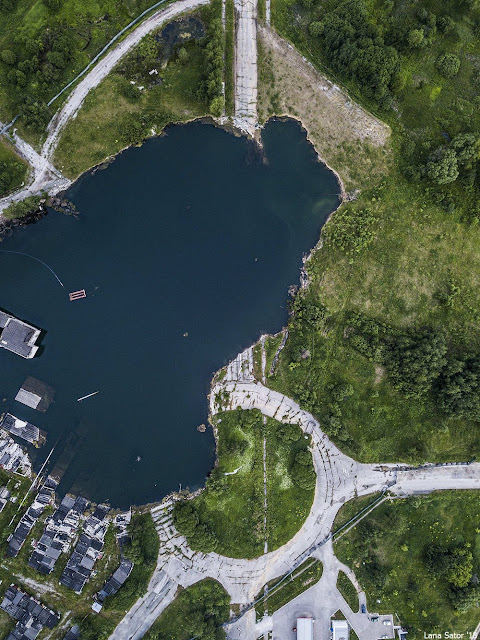 Be Careful Where You Point That: A-ok Hand Gesture 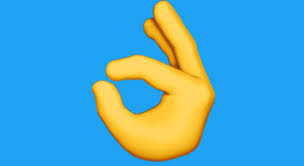 If you live in the United States, the A-Ok signal is given by connecting your index finger with your thumb as a sign for OK good thing. In the western society this hand gesture usually denotes positive feelings. This however is not a universal gesture, for it does not give the same message in other cultures around the world. The western culture encompasses only a small minority of the people of Earth and there is much to be learned.

For those touring about the world, be careful when and where you give the ok gesture because it could range from being rude to downright offensive, possible even on the level of the middle finger. For example, in Venezuela and Turkey giving the ok to someone is like telling them that they are homosexual. This connotation comes from the hole in the ‘okay’ symbol that represents a widened anal tract. In France and Belgium it gives the impression of worthless or the number zero, so do not give people of these countries the OK sign, for it would be incredibly offensive.

In Brazil it is the equivalent of the middle finger, an infamous example of this occurred in the 50’s when Richard Nixon visited Brazil and flashed the OK sign when descending from his plane; this simple act was effectively giving the middle finger to the waiting crowd, could you imagine a foreign leader doing this on national television.

Not all different meanings are negative but some can hold either positive or neutral meanings; in Japan it means money. In Finland it could be used by personnel in the military to show that they have 0 days left to serve.

Now the US isn’t too foreign, some other countries also apply similar meanings to the OK as many Americans. The gesture can mean well ok in countries such as Canada, Ireland, scuba diving (the thumbs up means you want to ascend to the surface), Italy, and young people in Japan.

Posted by BytesMaster at 2:58 AM