Continuing: Photos of Historical Events That Will Give you a New Perspective

The photos and text are from the above source, the additional text is by moi. 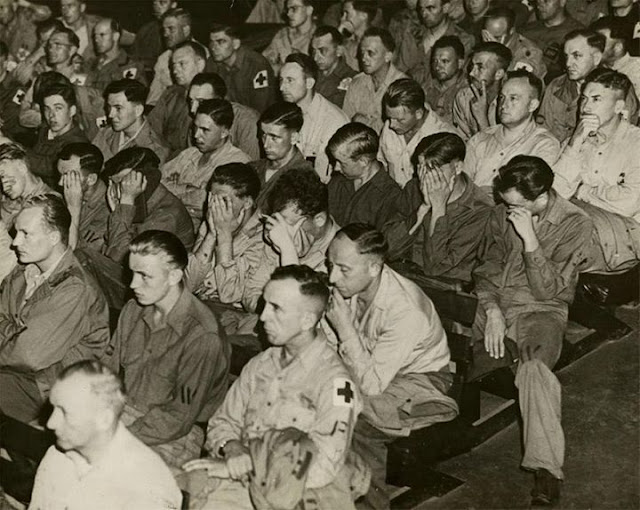 The Nazi regime ruled Germany between 1933 and 1945, and was in charge of enslaving, torturing and killing millions of people in infamous concentration camps, especially after the beginning of the Second World War.

Solders fighting for Hitler were too busy trying to survive the war to actually think about all the atrocities he was committing off the battlefield. That changed after the war finally came to a close in 1945 and these German prisoners had a rude awakening once they saw some of the footage filmed inside concentration camps.

Additional comment:
Horrific photographs of the conditions of the Nazi death camps and labour camps canm be viewed at:
https://www.theatlantic.com/photo/2011/10/world-war-ii-the-holocaust/100170/
These include photographs of local citizens being made to look at the remains of the inmates and to assist in the disposal of the remains. 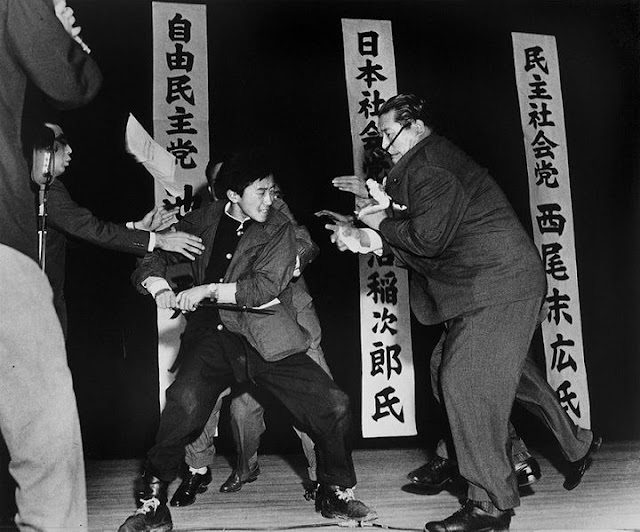 Inejiro Asanuma was one of the most controversial Japanese figures of his generation, and most residents of this country weren’t crazy about his socialist agenda. 17-year-old Otoya Yamaguchi was one of his biggest haters – he killed this political leader with a traditional Japanese blade in 1960.

The incident was captured by a Japanese television company, and the whole country got to see it on their small screens. Right-wing groups celebrated Yamaguchi as a martyr after he committed suicide in prison, three weeks after the assassination.

Additional comment:
This photograph has been the subject of a 2013 Bytes post in the series of Pulitzer and World Press Photos of the Year.  That post can be looked at by clicking:
http://bytesdaily.blogspot.com/search?q=Inejiro+Asanuma 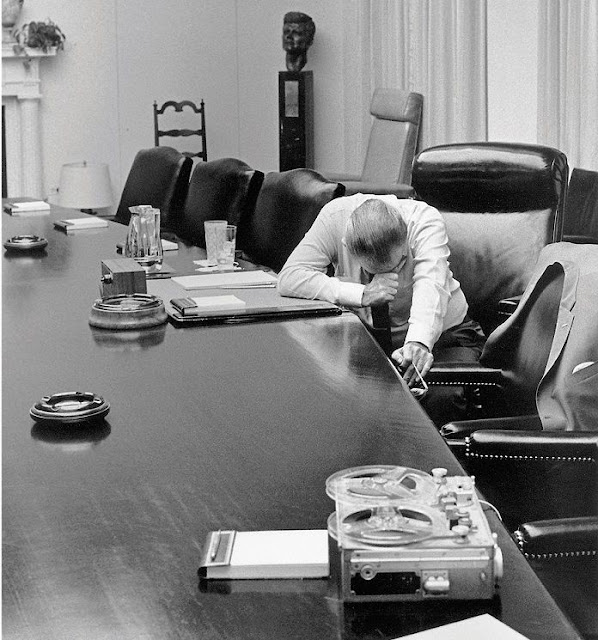 The Vietnam War has taken a toll on almost every US citizen at the time. President Lyndon Johnson was obviously among the people affected by the wat.

Just like everyone else in the country, Johnson had had family members fighting in Vietnam. This photo shows the president listening to a tape that his son-in-law, Charles Robb, sent him from the battlefield in 1968.

Additional comment:
Charles Robb was married to Johnson's daughter Lynda Bird Johnson. Robb, then a captain in the Marine Corps, had met Lynda Bird while serving as a military aide at the White House. Johnson had asked Robb to send him reports of what was really happening on the ground in Vietnam, where Robb served with distinction. Robb later became Governor of Virginia and a US Senator. The above pic, often referred to as showing the anguish of LBJ in a private moment, happened at a time when it must have felt like the fabric of US society being torn: 1968 was the time of the Tet Offensive in Viet Nam, increasing opposition to the war, the assassinations of Robert Kennedy and martin Luther King Jnr months before this photograph and increasing civil unrest. 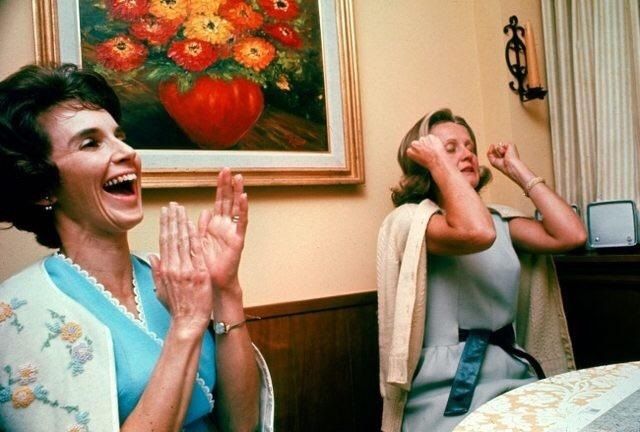 Apollo 8 went down in history as the first manned spacecraft to leave Earth's orbit, reach the Moon, orbit it and return safely to Earth. The three-astronaut on board – Frank Borman, James Lovell and William Anders – became the first people to ever see Earth as a whole planet.

People around the world were happy to hear their mission went smoothly, but no one was more excited than their wives. This photo shows them their husbands voices from orbit. 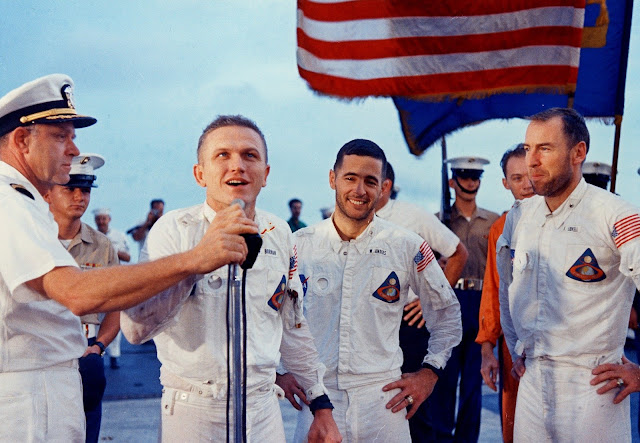 The command module on the deck of the USS Yorktown after retrieval. 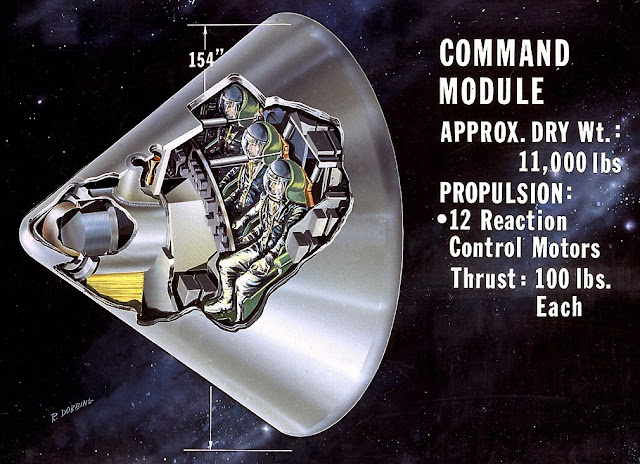 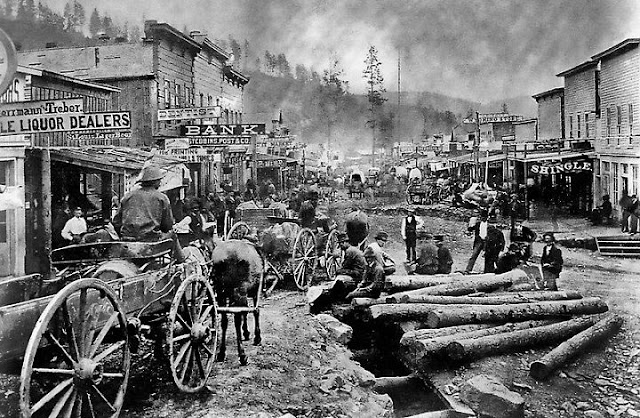 Deadwood went down in history as one of the most lawless cities the world has ever seen. It all started in 1874, when Colonel George Armstrong Custer announced he had discovered gold on French Creek during an expedition he led into the Black Hills.

This discovery triggered the Black Hills Gold Rush, and Deadwood was never the same again. This small town in South Dakota quickly reached a population of around 5,000 and became a cradle of sin that attracted gold-seekers from all over the country.

Additional comment:
Deadwood was established in 1876 during the Black Hills gold rush. In 1875, a miner named John B. Pearson found gold in a narrow canyon in the Northern Black Hills. This canyon became known as "Deadwood Gulch," because of the many dead trees that lined the canyon walls at the time. The name stuck for the town.

James Butler Hickok (1837 – 1876), better known as "Wild Bill" Hickok, was a folk hero of the American Old West known for his work across the frontier as a drover, wagon master, soldier, spy, scout, lawman, gunfighter, gambler, showman, and actor. He earned a great deal of notoriety in his own time, much of it bolstered by the many outlandish and often fabricated tales that he told about his life. Some contemporaneous reports of his exploits are known to be fictitious, but they remain the basis of much of his fame and reputation, along with his own stories. 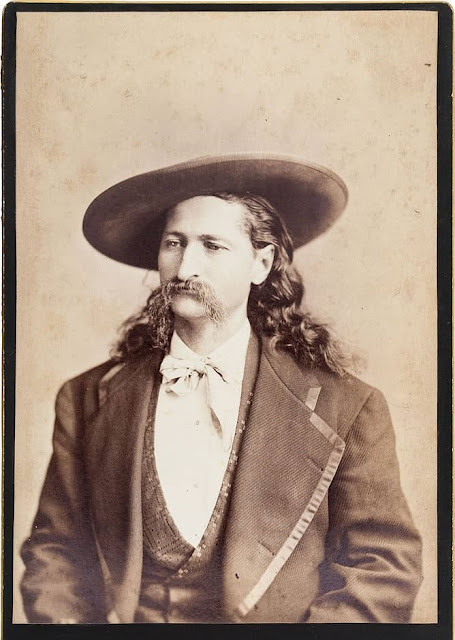 A cabinet card photograph of Wild Bill Hickok taken in 1873, three years before he made his fateful trip to Deadwood.

On August 1, 1876, Hickok was gambling at Nuttal and Mann’s Saloon when a drunken Jack McCall joined the game and began losing heavily. When McCall lost most of his money and could no longer cover his bets, none of the other players would extend him any credit. Hickok told him to get something to eat and offered him some money to pay for a meal. Although McCall took Hickok’s money he apparently considered the manner in which it was offered to be insulting. Hickok and the others continued the game. McCall sulked over his perceived insult until the following day.

The next day Hickok was drinking at the bar in Nuttal and Mann’s when he was invited to join another game, at which the only open seat had its back to the door. Hickok’s habit was to face the door, and he twice asked to exchange seats with another player, who refused. While they were playing, McCall entered the saloon and shot Hickok once, in the back of his head, with the bullet exiting through the victim’s cheek. McCall fled, tried to steal a horse but fell from it, and was found hiding behind a butcher shop. Hickok was killed instantly, although some attempts were made to revive him. He had been playing stud poker, and his four displayed cards were black aces and eights, but there are varying reports of what his hole card had been. 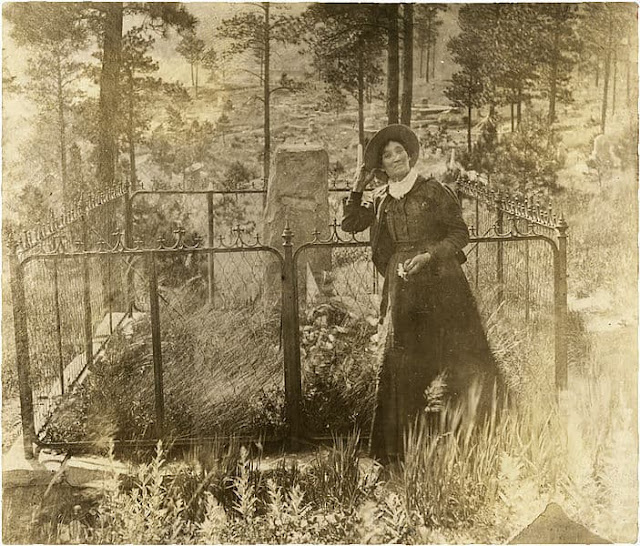 Calamity Jane, seen here at Hickok’s grave in the 1890s, claimed to have pursued his killer while wielding a meat cleaver. 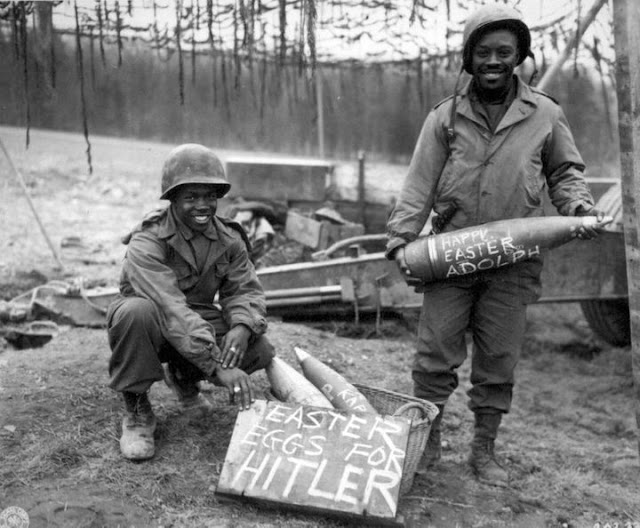 Finding humor in the middle of war is pretty much impossible, but these American soldiers found a way to laugh in the face of misery.

They didn’t have any eggs they could color just in time for Easter, and decorated bombshells instead. They put Hitler’s name on the bomb shells and symbolically delivered them to him by sending them to the front line in Germany.

This photo of US soldiers, members of the 969th Field Artillery Battalion, was taken back in 1944. 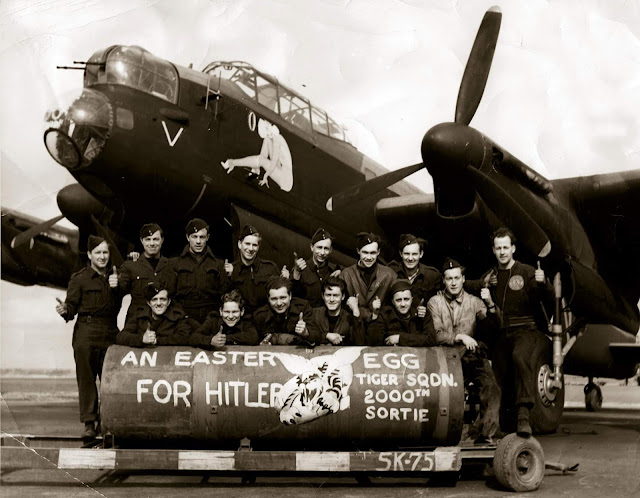 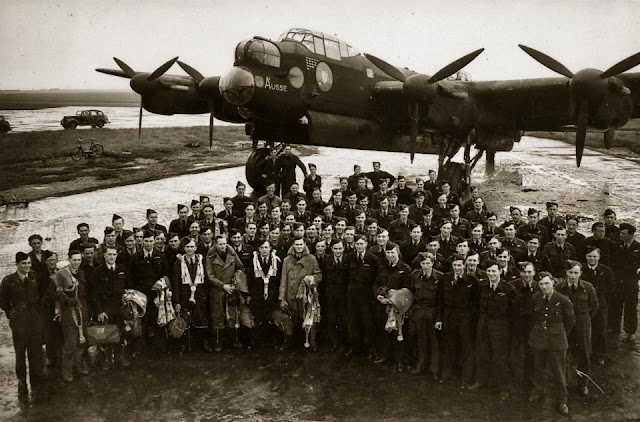 RAF crews pose proudly in front of bomber called Aussie at their base in Breighton, East Yorks 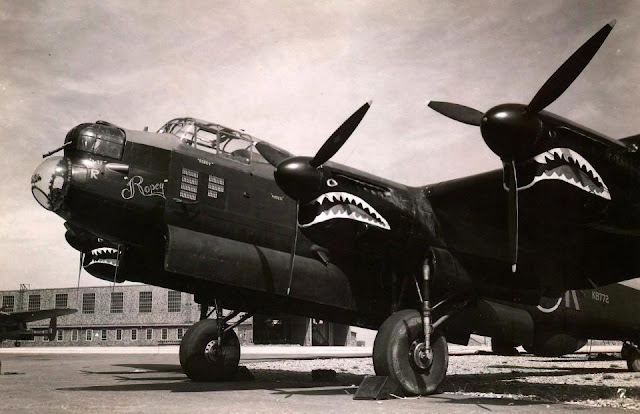 7,377 Lancasters carried out more than 150,000 missions by the end of the Second World War, including the supremely audacious Dambuster Raids of 1943. The men who flew them had the most perilous posting of the war - Bomber Command – and 3,249 aircraft and their crews would be lost in action.