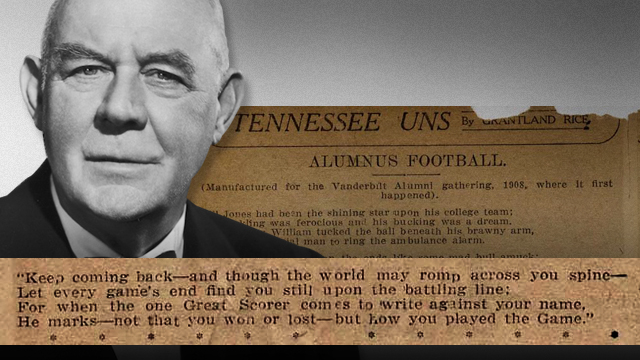 Rice was an early 20th-century American sportswriter known for his elegant prose. His writing was published in newspapers around the country and broadcast on the radio. An interesting anecdote about Rice, one illustrative of his sense of honour, is that before leaving for service in World War I, he entrusted his entire fortune, about $75,000, to a friend. On his return from the war, Rice discovered that his friend had lost all the money in bad investments, and then had committed suicide. Rice accepted the blame for putting "that much temptation" in his friend's way and made monthly contributions to the man's widow throughout his life.

The poem is not as well remembered today as the final two lines but worth reading . . .

Bill Jones had been the shining star upon his college team.
His tackling was ferocious and his bucking was a dream.
When husky William took the ball beneath his brawny arm
They had two extra men to ring the ambulance alarm.

Bill hit the line and ran the ends like some mad bull amuck.
The other team would shiver when they saw him start to buck.
And when some rival tackler tried to block his dashing pace,
On waking up, he’d ask, “Who drove that truck across my face?”

Bill had the speed-Bill had the weight-Bill never bucked in vain;
From goal to goal he whizzed along while fragments, strewed the plain,
And there had been a standing bet, which no one tried to call,
That he could make his distance through a ten-foot granite wall.

When he wound up his college course each student’s heart was sore.
They wept to think bull-throated Bill would sock the line no more.
Not so with William – in his dreams he saw the Field of Fame,
Where he would buck to glory in the swirl of Life’s big game.

Sweet are the dreams of college life, before our faith is nicked-
The world is but a cherry tree that’s waiting to be picked;
The world is but an open road-until we find, one day,
How far away the goal posts are that called us to the play.

So, with the sheepskin tucked beneath his arm in football style,
Bill put on steam and dashed into the thickest of the pile;
With eyes ablaze he sprinted where the laureled highway led-
When Bill woke up his scalp hung loose and knots adorned his head.

He tried to run the ends of life, but with rib-crushing toss
A rent collector tackled him and threw him for a loss.
And when he switched his course again and dashed into the line
The massive Guard named Failure did a toddle on his spine.

Bill tried to punt out of the rut, but ere he turned the trick
Right Tackle Competition scuttled through and blocked the kick.
And when he tackled at Success in one long, vicious prod
The Fullback Disappointment steered his features in sod.

Bill was no quitter, so he tried a buck in higher gear,
But Left Guard Envy broke it up and stood him on his ear.
Whereat he aimed a forward pass, but in two vicious bounds
Big Center Greed slipped through a hole and rammed him out of bounds.

But one day, when across the Field of Fame the goal seemed dim,
The wise old coach, Experience, came up and spoke to him.
“Oh Boy,” he said, “the main point now before you win your bout
Is keep on bucking Failure till you’ve worn the piker out!”

“And, kid, cut out this fancy stuff – go in there, low and hard;
Just keep your eye upon the ball and plug on, yard by yard,
And more than all, when you are thrown or tumbled with a crack,
Don’t sit there whining-hustle up and keep on coming back;

“Keep coming back with all you’ve got, without an alibi,
If Competition trips you up or lands upon your eye,
Until at last above the din you hear this sentence spilled:
‘We might as well let this bird through before we all get killed.’

“You’ll find the road is long and rough, with soft spots far apart,
Where only those can make the grade who have the Uphill Heart.
And when they stop you with a thud or halt you with a crack,
Let Courage call the signals as you keep on coming back.

“Keep coming back, and though the world may romp across your spine,
Let every game’s end find you still upon the battling line;
For when the One Great Scorer comes to mark against your name,
He writes – not that you won or lost – but how you played the Game. 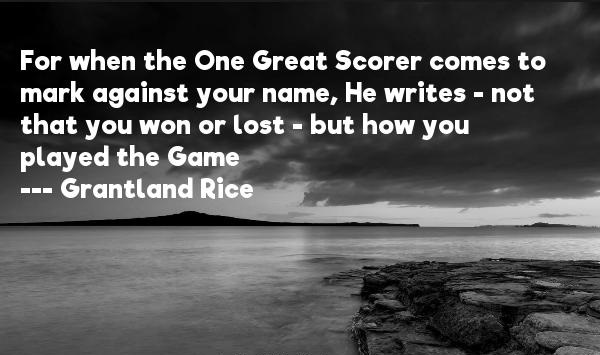