I thought the following four [rules] would be enough, provided that I made a firm and constant resolution not to fail even once in the observance of them.


The first was never to accept anything as true if I had not evident knowledge of its being so; that is, carefully to avoid precipitancy and prejudice, and to embrace in my judgment only what presented itself to my mind so clearly and distinctly that I had no occasion to doubt it.

The second, to divide each problem I examined into as many parts as was feasible, and as was requisite for its better solution.

The third, to direct my thoughts in an orderly way; beginning with the simplest objects, those most apt to be known, and ascending little by little, in steps as it were, to the knowledge of the most complex; and establishing an order in thought even when the objects had no natural priority one to another.

And the last, to make throughout such complete enumerations and such general surveys that I might be sure of leaving nothing out.

These long chains of perfectly simple and easy reasonings by means of which geometers are accustomed to carry out their most difficult demonstrations had led me to fancy that everything that can fall under human knowledge forms a similar sequence; and that so long as we avoid accepting as true what is not so, and always preserve the right order of deduction of one thing from another, there can be nothing too remote to be reached in the end, or to well hidden to be discovered. 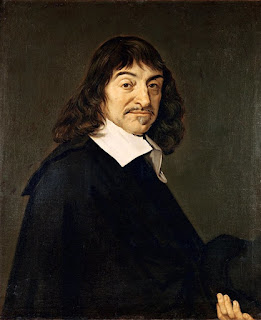 René Descartes (1596 – 1650) was a French philosopher, mathematician, and scientist. A native of the Kingdom of France, he spent about 20 years of his life in the Dutch Republic. One of the most notable intellectual figures of the Dutch Golden Age, Descartes is also widely regarded as one of the founders of modern philosophy.