Continuing: Photos of Historical Events That Will Give you a New Perspective 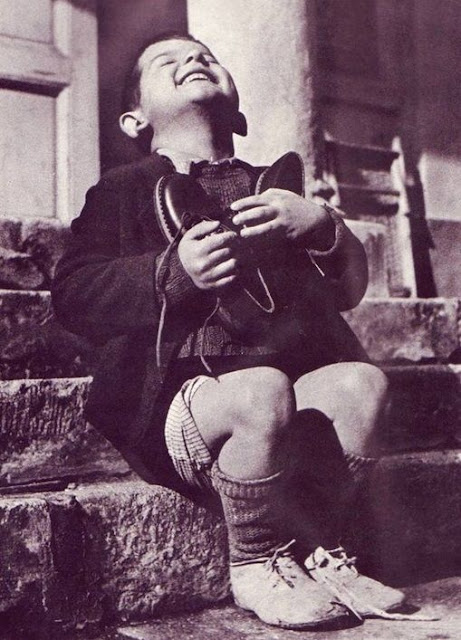 World War II ended in 1945, but it took a while for Europe to recover from all the destruction and carnage.

Each and every country suffered a great financial depression in the years to come, including Austria. This country was in such a deplorable financial shape that the citizens were on the brink of starvation by 1947.

That might explain why this little boy, living at an orphanage in Austria, was head over heels after getting a new pair of shoes.

The picture was first published in LIFE magazine on December 30, 1946, with the following caption:

For many of Europe’s children there was a Santa Claus this Christmas. When a big box from the American Red Cross arrived at Vienna’s Am Himmel orphanage, shoes and coats and dresses tumbled out. Like the youngster (above), the children who had seen no new clothes throughout the war smiled to high heaven. But for thousands of other European children there was no Santa Claus. When a boatload of illegal Jewish immigrants arrived at Haifa, Palestine recently, two Polish children (opposite) got separated from their parents. Tears filled the eyes of the boy, and his wan sister clutched him protectively. They were later reunited with their parents, but the whole family was shipped to Cyprus.

Mussolini is Watching You: 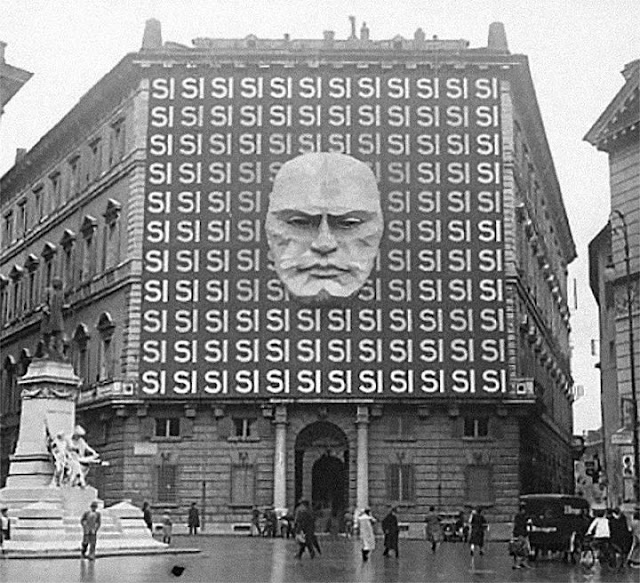 This may look like one of the photos you only get to see in dystopian films, but it’s actually something than happened in reality. This picture was taken in front of Palazzo Braschi, which once served as the headquarters of Benito Mussolini’s National Fascist Party.

This Italian dictator was no stranger to using propaganda to get voters on his side, and this bizarre Orwellian set-up from 1934 is one of the most notable examples of his “advertising techniques”. It apparently worked, since he ended up receiving 99.84% of the votes that year.

The building in the picture is Palazzo Braschi in Rome, the headquarters of the Fascist Party Federation (the local one, not the national Party headquarters). It was not always covered up like that; this set-up was displayed for the 1934 elections, in which Italians were called to vote either for or against the Fascist representatives list. The “SI SI…” lettering (meaning “Yes Yes…”) was propaganda for one of the two plebiscite elections held during the Fascist Regime, where electors didn’t vote for individual parties (there wasn’t any but the Fascist one), neither for single candidates, but just voted “Yes” or “No” to a single list of candidates presented by the Duce himself.

The voting procedure used two ballots and two envelopes; the yes ballot was in the colors of the Italian flag with fascist symbols, while the no ballot was a white sheet. The voter had to place the ballots in envelopes, put his chosen ballot in the ballot box and return the discarded one to the voting supervisors, de facto allowing them to check what each person had voted. The list put forward was ultimately approved by 99.84% of voters. The overwhelming majority provoked Benito Mussolini to dub the election the “second referendum of Fascism”. 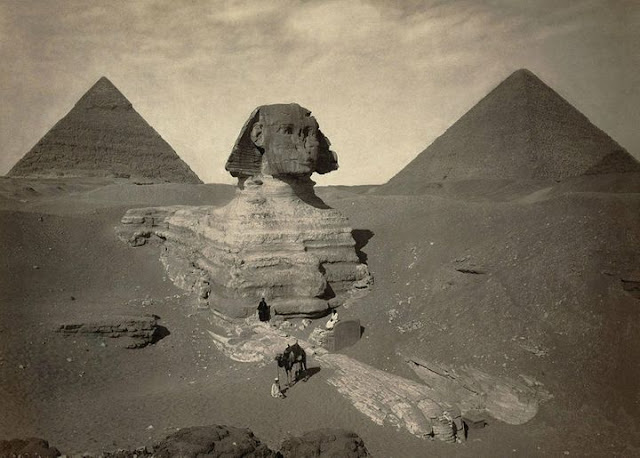 Seeing the Great Sphinx of Giza is one of the items on everyone’s bucket list and it’s Egypt’s biggest tourist attraction. This monumental limestone statue was inspired by a mythical creature, with a human head and the body of a lion.

Discovering it in its full glory wasn’t easy and there was a long period of time when people weren’t even aware of its existence.

It’s believed that the sphinx was built by ancient Egyptians circa 2558–2532 BC, and this photo shows it being partially excavated back in the 1860s.

What happened to the Sphinx’s nose?Legends have passed over hundreds of years regarding the simple omission in this photograph of the Sphinx and the Pyramid of Khafre, part of the Giza Pyramid (or Great Pyramid) complex in Egypt. Where is the Sphinx’s nose? Many of us have heard the tale that a cannonball fired by Napoleon’s soldiers hit the nose and caused it to break off. Sketches of the Sphinx by the Dane Frederic Louis Norden were created in 1737 and published in 1755, well before the era of Napoleon. However, these drawings illustrate the Sphinx without a nose and clearly contradicts the legend. So what really happened?The Egyptian Arab historian al-Maqrīzī wrote in the 15th century that the nose was actually destroyed by a Sufi Muslim named Muhammad Sa'im al-Dahr. In 1378 CE, Egyptian peasants made offerings to the Great Sphinx in the hope of controlling the flood cycle, which would result in a successful harvest. Outraged by this blatant show of devotion, Sa'im al-Dahr destroyed the nose and was later executed for vandalism. Whether this is absolute fact is still debatable. 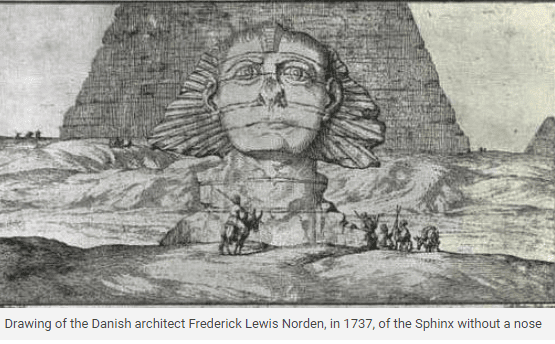 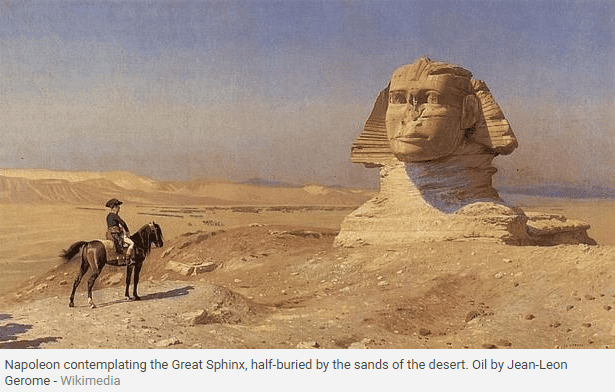