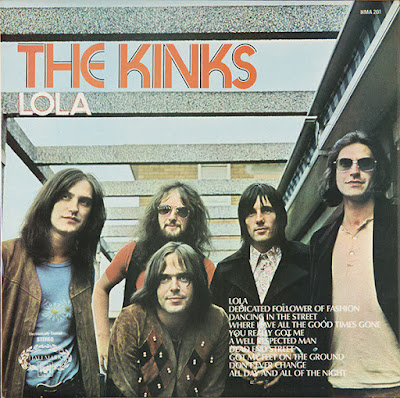 The song is about a boy who meets a girl (Lola) in a club who takes him home and rocks his world. The twist comes when we find out that Lola is a man.

Ray Davies has claimed that he was inspired to write "Lola" after Kinks manager Robert Wace spent a night in Paris dancing with a transvestite. Davies said of the incident, "In his apartment, Robert had been dancing with this black woman, and he said, 'I'm really onto a thing here.' And it was okay until we left at six in the morning and then I said, 'Have you seen the stubble?' He said 'Yeah', but he was too pissed to care, I think".

The line "You drink champagne and it tastes just like cherry cola" was recorded as "it tastes just like Coca-Cola." The British Broadcasting Company (BBC) refused to play it because of the commercial reference, so Ray Davies flew from New York to London to change the lyric and get the song on the air.

The Kinks probably weren't familiar with it, but an American song published in 1918 also mentions Lola and Coca-Cola. In "Ev'ry Day'll Be Sunday When The Town Goes Dry," we hear the line, "At the table with Lola they will serve us Coca-Cola."
---oOo---

I met him in a swamp down in Dagoba
Where it bubbles all the time like a giant carbonated soda
S-O-D-A, soda
I saw the little runt sitting there on a log
I asked him his name and in a raspy voice he said "yoda"
Y-O-D-A, Yoda
Yo-yo-yo-yo Yoda

Well, I left home just a week before
And I've never ever been a Jedi before
But Obi Wan, he set me straight, of course
He said, "Go to Yoda and he'll show you the Force"
Well I'm not the kind that would argue with Ben
So it looks like I'm gonna start all over again
With my Yoda

So I used the Force
I picked up a box
I lifted some rocks
While I stood on my head
Well, I won't forget what Yoda said
He said, "Luke, stay away from the darker side
And if you start to go astray, let the Force be your guide"
Oh, my Yoda
Yo-yo-yo-yo Yoda
"I know Darth Vader's really got you annoyed
But remember, if you kill him, then you'll be unemployed"
Oh, my Yoda
Yo-yo-yo-yo Yoda

Well, I heard my friends really got in a mess
So I'm gonna have to leave Yoda, I guess
But I know that I'll be coming back some day
I'll be playing this part 'till I'm old and grey
The long-term contract that I had to sign
Says I'll be making these movies till the end of time
With my Yoda 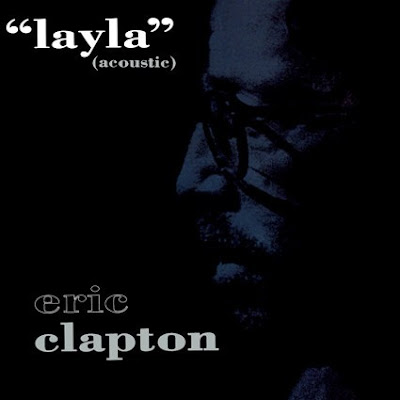 Written by Eric Clapton, the song was inspired by a love story that originated in 7th-century Arabia and later formed the basis of The Story of Layla and Majnun by the 12th-century Persian poet Nizami Ganjavi, a copy of which had been given to Clapton. The book moved Clapton profoundly, because it was the tale of a young man who fell hopelessly in love with a beautiful, young girl, went crazy and so could not marry her. The song was further inspired by Clapton's then unrequited love for Pattie Boyd, the wife of his friend and fellow musician George Harrison of the Beatles.

Boyd divorced Harrison in 1977 and married Clapton in 1979 during a concert stop in Tucson, Arizona. Harrison was not bitter about the divorce and attended Clapton's wedding party with fellow Beatles Ringo Starr and Paul McCartney. Clapton left Boyd for actress Lory Del Santo (with whom he had his son, Conor) in 1985 and they were divorced in 1988.

In an article published in The Guardian December 13, 2008, Pattie said: "I wasn't so happy when Eric wrote 'Layla,' while I was still married to George. I felt I was being exposed. I was amazed and thrilled at the song - it was so passionate and devastatingly dramatic - but I wanted to hang on to my marriage. Eric made this public declaration of love. I resisted his attentions for a long time - I didn't want to leave my husband. But obviously when things got so excruciatingly bad for George and me it was the end of our relationship. We both had to move on.”

According to Bobby Whitlock, who was in the band and good friends with both Harrison and Clapton: "I was there when they were supposedly sneaking around. You don't sneak very well when you're a world figure. He was all hot on Pattie and I was dating her sister. They had this thing going on that supposedly was behind George's back. Well, George didn't really care. He said, 'You can have her.' That kind of defuses it when Eric says, 'I'm taking your wife' and he says, 'Take her.' They got married and evidently, she wasn't what he wanted after all. The hunt was better than the kill. That happens, but apparently Pattie is real happy now with some guy who's not a guitar player. Good for her and good for Eric for moving on with his life. George got on with his life, that's for sure."

The song was originally released by Clapton’s blues rock band Derek and the Dominos, as a track on the 1970 album Layla and Other Assorted Love Songs. It was a flop but Clapton performed a slow, acoustic version for an MTV Unplugged concert in 1992. It was released as a single and made #12 in the US, getting lots of airplay on pop, rock, and adult contemporary radio stations. This version also won a Grammy for Best Rock Song. 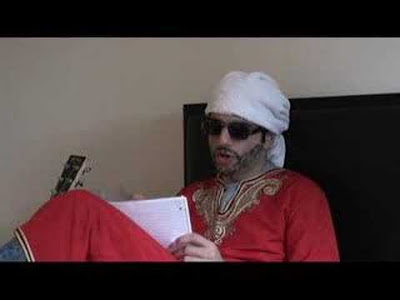 You know that song Hey There Delilah? There's a parody on YouTube that is quite funny and worth watching/listening to, even if not strictly PC. Click on the following link, it’s had over 8 million views:
https://www.youtube.com/watch?v=hMqTKA8BxvE

Here are the lyrics:

Hey there, Khalilah, what's it like in Baghdad City?
I'm 3,000 miles away but girl tonight you're looking pretty
Can't you see?
You're looking really hot, baby. Literally.

Hey there, Khalilah, I am at my latest booking
But I'm writing you tonight to say how much I miss your cooking
So I sob.
Wipe all my tears up with a mop. There's no kabob.

Hey there Khalilah, you stay good and cook some coosa
Til I'm back there making money at the Improv in Falluja
Give it time.
I'm bombing really bad this time. No, not that kind.

Hey there, Khalilah, if I must eat one more Twinkie
Well I might just have to lick my arm and then bite off my pinky
What a scene. The only Arab food I see's
Attached to me

3,000 miles is far away, but I just want kabob today
I'd eat it all up with a knife and fork.
Why am I so far from you? All they have here is bar-b-que
Which would be good except I don't eat pork.
The ketchup here is really bad, the mustard's not a deadly gas
This pizza box tastes better, that's for sure
And it's cardboard

Hey there, Khalilah, you're tahini on falafal
No, you're not sesame paste but girl I just can't eat without you
So you know. I'll have kabob when I get home.
And chug rose water like a pro
Cuz I do not like Domino's
Oh no I don't.

Posted by BytesMaster at 6:31 AM